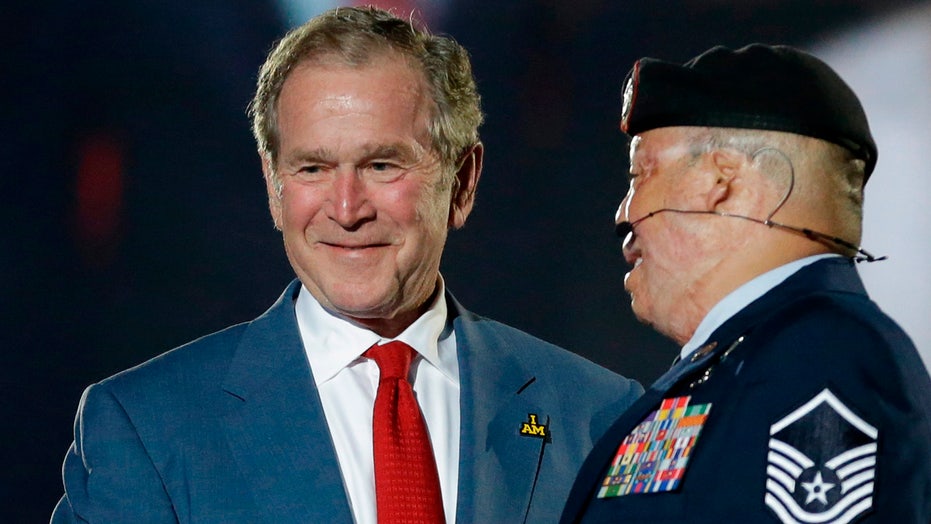 The Invictus Games, started by Prince Harry in England in 2013, are taking place for the first time in the U.S. this week in Orlando, Fla., with wounded servicemen and women from 14 countries engaging in paralympic-style sports including archery, wheelchair volleyball and basketball, swimming and track and field.

Invictus means unconquered, and the courage and excitement at these games is contagious. They focus on the invisible wounds of war: post-traumatic stress (PTS) and traumatic brain injury (TBI), which are at least six times more common than the wounds you can see. The courage needed to face sleepless nights, anxiety and depression is at least as great as that needed to confront visible wounds.

President George W. Bush is the honorary chairman this year, and I spoke with him about the efforts to raise awareness and promote healing.

“I’m deeply concerned about the wounds that you can’t see – TBI or PTS,” Bush said. “And so here at the Invictus Games, of course we’re concerned about making sure they have the best prosthesis or the best wheelchair, the best help. These games show that they’re improving. Our focus at the Bush Center is to say: What can we do?

“And one thing we can do is to make sure that these vets admit that they’ve got a problem. There’s a stigma, and your job and my job is to help these vets understand it’s courageous to say I need some help.”

The George W. Bush Institute presented a symposium at the games this past Sunday on the struggle to overcome the stigma and heal invisible wounds, and some of the world’s top experts attended, including PTS expert and psychiatrist Neil Greenberg from King’s College London, and TBI expert James Kelly, professor of neurology at the University of Colorado.

Attention is finally starting to be paid to invisible wounds. Bush’s father, President George H.W. Bush, a navy pilot and war hero, was shot down over the Pacific during World War II, but he famously didn’t want to talk about it after the war.

Things were not much better in the Vietnam era. I spoke with Medal of Honor recipient Allen Lynch, who pulled several comrades out of heavy machine gun fire in Vietnam. He said PTS resulted in part from not always knowing who your enemy was. I could see the pain in his face as he reflected on the war.

“I went through a lot of years struggling,” Lynch said. “Suicidal ideation and all the things that go along with it, and it was a, uh … I had a strong family, my wife stayed with me and I had my buddies in the Reserves that helped.

“We were all Vietnam vets, so we kind of worked with each other. I was in three years of therapy again before there was even a diagnosis, just someone to talk to.”

Today, as international veterans from the wars in Iraq and Afghanistan join to compete as a path to heal, Bush believes the positive effects go way beyond the games. He said the games help the Vets realize they’re not alone. As team members, they talk not only about the sport they’re going to play, but also sometimes about their own injuries. They boost each other’s confidence that way.

“It may just be somebody who is on the team says, ‘I went to an amazing clinic and I got help and you ought to try the same thing.’ To the extent that can ripple through the vet community, it’s going to help a lot,” Bush said.

Special Forces Staff Sgt. August O’Neill, a rescue paratrooper who lost a leg during a mission in Afghanistan, is competing in swimming and volleyball in the Invictus Games and will soon return to active duty. He jumped out of a helicopter during the opening ceremony. He says that through adaptive sports, he has been able to realize that he can get up and do whatever everyone else does and compete just as hard, and this has helped him get in the mindset he needs to return to duty.

“I thought I’d never be able to do my job again,” O’Neill said. “It’s great knowing that once again I can be one of the guardian angels over my brothers in the battlefield.”

Bush says there should be no politics involved in helping the vets. He says that unlike in the Vietnam era, the country as a whole wants to help our vets these days, including those who may not have agreed with his decision to go to war.

“These are people who are going to make this country of ours a lot stronger for the future,” Bush said. “Helping them transition … is a cause worthy of any citizen.” As he spoke, the former commander-in-chief's deep commitment and love for our vets was apparent.

O’Neill said he was honored to appear in the opening ceremony. “Flying in with that crew … gave me an almost overwhelming sense of happiness. It was a beautiful sunset over a magic city, and I got to deliver the Invictus flag and represent all of our warriors.”