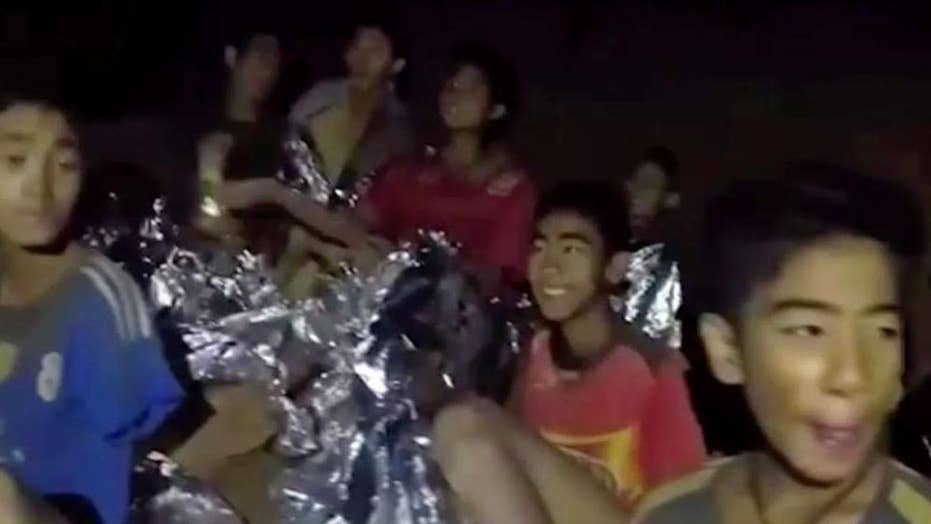 The world is captivated by the story of the 12 young soccer players and their coach who went exploring in a cave in Thailand June 23 and became stranded when water filled their route and blocked their exit. The boys, ages 11 to 16, and their 25-year-old coach were found by divers Monday.

Frantic efforts are now underway to drain as much water as possible from the cave so the boys and their coach can either wade out with life jackets or – if that proves impossible – exit the cave underwater with the help of scuba gear.

According to news reports, the boys can’t swim, so exiting underwater is considered a dangerous last resort. However, rescuers fear monsoon rains will flood much of the cave Saturday. If that happens, a quick exit from the cave may be required, or the boys could be trapped in the cave for months. The rainy season in Thailand normally lasts until October.

Rescuers are also considering drilling a hole into the cave to pull the boys out, but are not optimistic they will be able to do that.

The lost boys and their coach survived for nine days on water dripping from stalactites before they were reached by divers, who brought them food, water, blankets and other supplies and are now training them in swimming and diving.

If the boys and their coach are taken out in a dive, rescuers will likely employ a buddy system with divers and possibly a static rope to guide each boy. Each boy may have his own assigned rescue diver carrying an oxygen tank, or alternatively the rescuers may be positioned along the route. Some passages are so narrow that a diver wearing a scuba tank can’t squeeze through.

No matter what the exact technique, it will be difficult for the untrained boys to get past the tight underwater sections of muddy water where they will be unable to see.

Nevertheless, I believe there are already several good signs that the rescue will ultimately be a success.

In the first place, the young soccer players are a cohesive team, already skilled in relying on each other, and are working with experienced divers to set up a well-organized, panic-free escape.

Consider that the trapped boys have already shown bravery and mental fortitude in the way they survived for nine days without knowing when or if they would ever be found. Yet when they were found they were calm, several were laughing, and they assured rescuers they were in good health.

This is a very good sign that the boys can control their negative emotions. As I wrote in my book “False Alarm; the Truth about the Epidemic of Fear,” both fear and courage are contagious. Both are strong emotions that engage the same primitive centers of the forebrain, but they can’t engage these centers at the same time. Laughter is an antidote for fear, as is comradery.

As the boys wait for a final rescue to take place, remaining calm means that they will also take more precautions and will be much less likely to spread bacteria and become physically ill, impeding their escape. Their drinking water supply and waste disposal need to be managed carefully.

The young soccer players can be trained in how to use masks and how to rely on divers for their oxygen if an underwater escape becomes necessary. It is likely that given enough time and repetition they can be taught how to swim and how to wriggle through narrow passages underwater.

The boys can even be taught patience while a final plan is developed and enacted. But it is more difficult to teach a person to resist anxiety and not to spread it than anything else. The sudden panicked feeling of a mask coming off – or of getting stuck in a narrow passage – is very difficult to anticipate or treat.

One thing that will help the boys stay calm and enable them to escape is the static line they will be able to hold onto as the tangible path to the outside. In addition, they can rely on the reassuring and comforting presence of what I’ve called “fear guides.”

Parents can play that role, providing they remain calm themselves, as soon as the fiber optic line is in place that will allow them to talk to their sons by phone. The doctor and nurse on the scene will be able to use their expertise to provide protocols for preserving hygiene.

Information and structure helps to ensure calm by providing a clear path. But more than any other fear guide it is the rescue divers themselves – because of their experience and expertise in these dimensions and conditions – who will spread confidence and certainty among the boys, even as they provide the exact path and plan to escape what has become their underground prison.

The world watches and prays for the safe rescue of the trapped boys and their coach.