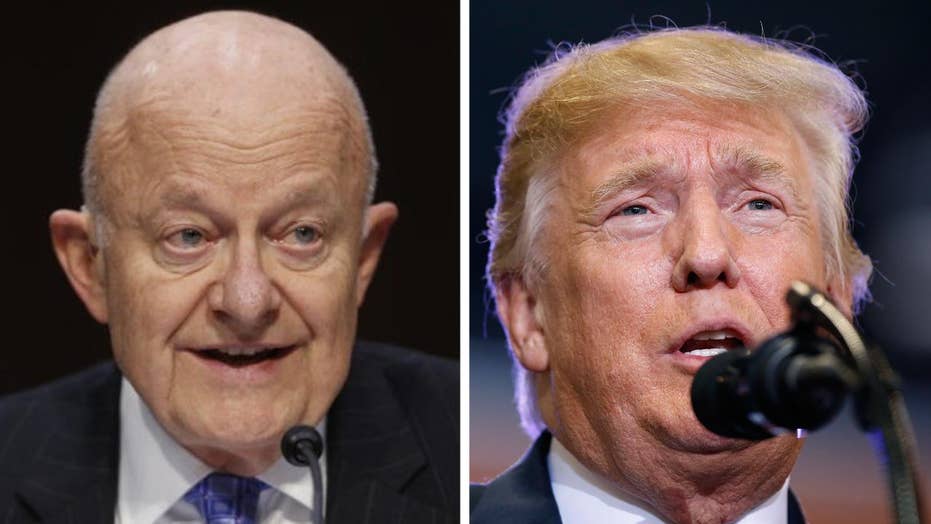 Former DNI Clapper questions Trump's fitness to be in office

This oped was originally published months ago—before Yale forensic psychiatrist Bandy Lee was known to be consulting with other psychiatrists and with members of Congress about creating an expert panel to advise Congress on President Trump’s mental well-being.  Publication also preceded recent comments calling into question the president’s fitness for office by James Clapper, who served in intelligence positions for Presidents Bush and Obama.

At the risk of sounding a bit narcissistic myself: These people should quiet down, enjoy a nice Trump cigar or glass of Trump wine and listen to me.

My insights are basic ones that an average medical student or below-average political science major in a college should be able to grasp, immediately.  So, chill.  Here we go . . .

Let me issue the standard disclaimer of psychiatrists who discuss the mental health of public figures: I have not personally examined President Trump. But, I don’t need to.

Now, here is my assessment, once again: Donald Trump is stone cold sane and more than mentally fit to be president of the United States.

When a man acquires billions of dollars through complex real estate transactions, invests in many countries, goes on to phenomenal success in television and turns his name into a worldwide brand, it is very unlikely that he is mentally unstable.

When the same man obviously enjoys the love and respect of his children and his wife, who seem to rely on him for support and guidance, it is extraordinarily unlikely that he is mentally unstable.

When that same man remains friends with his ex-wife (Ivana Trump), who supports him, politically, it is almost impossible that he is mentally unstable.

When the same man walks into the political arena and deftly defeats 16 Republican opponents and then the Democratic heir-apparent to a two-term president’s administration, the odds of that man being mentally unstable become vanishingly thin.

And when that very same man attracts to his team the kind of intellect and gravitas represented (to name just a few) by Secretary of Housing and Urban Development Dr. Ben Carson, Attorney General Jeff Sessions, Secretary of State Rex Tillerson, four star Marine Corps General John Kelly and Secretary of Defense James Mattis, a retired Marine Corps general and commander of the U.S. Central Command, he cannot be mentally deranged. Period. It is a statistical impossibility.

Those who imply otherwise are political opportunists, or fools, or both (and I am thinking here, in particular, of Dr. Lee).  Disclaimer:  I have not personally examined her for mental stability, either.

President Trump is the first human being to win this nation’s highest office without having held any other political office or serving as a general. Most political pundits thought his quest was pure folly. Most journalists assessed his chances as zero. So who was laboring under quasi-delusional thinking? Answer: Not Donald J. Trump.

Anecdotally, by the way, I have never had one bad Trump experience. Not one. I own several of his ties — all of them of the highest quality. I have stayed in his hotels and never had a single complaint (and I am a born complainer). I have eaten in his New York restaurant — flawless service, excellent food. I own an apartment at Trump Place in Manhattan. Impeccable design, sturdy construction, fabulous amenities.

I had two of his bumper stickers on my SUV.  They stayed on throughout the campaign and peeled off, without a bit of adhesive remaining to mar the bumper.

My son wears a Make America Great Again sweatshirt.  It’s been laundered a bunch. It still looks great. A mentally unstable man would be unlikely to deliver superior products across multiple industries, don’t you think?

If you’re still worried about the mental stability of the president, note this: The stock market doesn’t like instability. Investors, en masse, can take the measure of a man pretty darn well. The stock market has hit record high after record high since Trump’s election, and if you think that’s an accident, or that investors have all been fooled, it’s time to start wondering about your own capacity for rational thought.

Employers don’t like instability, either.  And job growth is surging.

I should note that nothing I am saying should besmirch the reputations of men like President Abraham Lincoln or Sir Winston Churchill, both of whom are said to have fought the ravages of major depression or bipolar disorder. One was instrumental in ridding America of slavery. The other was instrumental in saving the world from tyranny. Mahatma Gandhi, by the way, also reportedly suffered from depression.  So did Pablo Picasso and astronaut Buzz Aldrin.  Me, too, by the way.  Psychiatric illness does not, a priori, disqualify a person from rendering extraordinary service to mankind.

Mind you, neither Lincoln nor Churchill nor Gandhi led a nation after becoming a business sensation and television star. That trifecta defines one man: President Donald J. Trump.

Now, think about those who are rabble-rousing about the president’s mental status. Take Sen. Al Franken. Remember?  He was all worried about the president allegedly overestimating the crowd size at his inauguration. But Franken is allied with Sen. Elizabeth Warren, who asserted she is Native American, when there is no evidence of that whatsoever.

And they’re still calling Trump’s sanity into question? Really, you can’t make this stuff up.