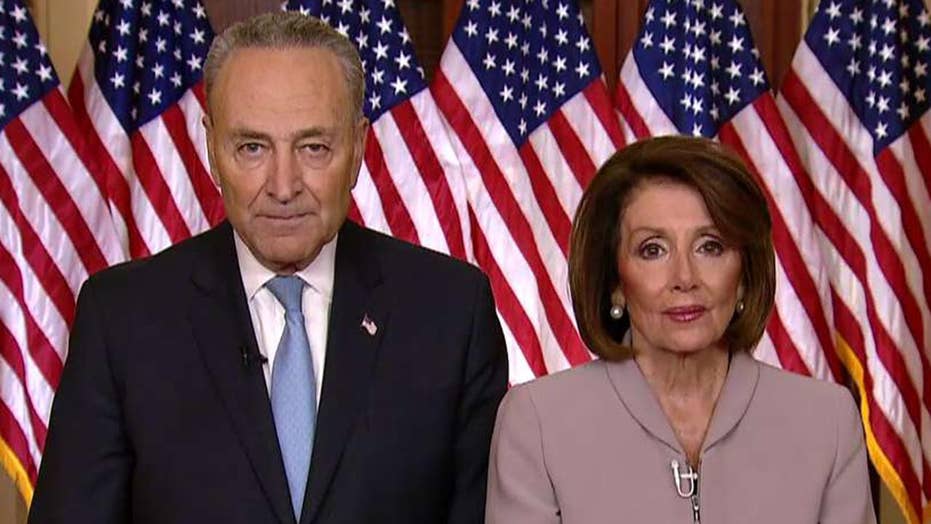 President Trump made his case to the American people in an Oval Office address Tuesday night for funding a wall along the U.S.-Mexico border as a means of protecting our nation and ending the ongoing partial government shutdown.

And the top Democrats in Congress – House Speaker Nancy Pelosi of California and Senate Minority Leader Chuck Schumer of New York – followed minutes later by making the opposite case in their own televised remarks, saying a wall is not needed.

The president and congressional Democrats remain locked in a standoff over the president’s demand for more than $5 billion to build the border wall, in the third week of the second-longest government shutdown in U.S. history.

DOUG SCHOEN: DEMOCRATS HAVE TRIMP BACKED INTO A CORNER AS 2019 KICKS OFF

President Trump called the situation on the southern border both a “humanitarian” and “national security” crisis. He added: “The federal government remains shut down for one reason, and one reason only, because Democrats will not fund border security … the only solution is for the Democrats to pass a spending bill that defends our border and reopens the government.”

Trump is obviously sidestepping the fact that on their first day in control of the House last week, the new Democratic majority did in fact pass a spending bill that increased border security and would have reopened the government.

The president continued in his address to the nation: “Hopefully, we can all rise above partisan politics in order to support national security.”

Ultimately, now is the time for compromise, not political posturing. For the sake of the nation and of his presidency, the president needs to relent on his hardline demand for over $5 billion in border wall funding, and should be willing to make a deal with the Democrats.

And a bipartisan solution may be possible.

Throughout 2017, Schumer was working on a deal to provide the Trump administration with funding for a border wall in exchange for protection from deportation for DACA recipients – some 700,000 young people brought to the U.S. as children in violation of our immigration laws. This deal made sense then, and it makes sense now.

The need for compromise is clear, and it is up to both President Trump and congressional Democrats to put partisanship aside and make a deal for the good of the nation.

In his own response to the president Tuesday night, Schumer said: “There is bipartisan legislation – supported by Democrats and Republicans – to reopen government while allowing debate over border security to continue.”

Pelosi and Schumer were able to use their remarks as an opportunity to show America that the Democrats are willing and able to be the party of leadership that promotes effective alternatives to the Trump administration.

It does not help the president’s cause in negotiating with Democrats that the data and purported facts his administration uses to defend the border wall are often questionable, if not inaccurate.

“Nearly 4,000 known or suspected terrorists come into our country illegally, and we know that our most vulnerable point of entry is at our southern border,” Sanders said, giving the frequently quoted statistic from the Trump administration.

“I know this statistic,” Wallace jumped in, “I didn’t know if you were going to use it, so I studied up on this. Do you know where those 4,000 people … where they’re captured? Airports.”

Indeed, U.S. Customs and Border Protection data that was provided to Congress in 2018 states that CBP only encountered six immigrants at ports of entry on the U.S-Mexico border in the first half of fiscal year 2018 who were known or suspected terrorists.

However, we cannot forget that immigration reform is a legitimate and concerning issue that needs to be addressed by lawmakers. And this can only be done through bipartisan legislation.

The need for compromise is clear, and it is up to both President Trump and congressional Democrats to put partisanship aside and make a deal for the good of the nation.

Democrats and Republicans are only weakening the country by closing down the government over the wall.

It makes no sense for Democrats to walk away from a valid proposal to protect our country. Compromise is possible, and I implore both Republicans and Democrats to come to a consensus and provide funding for the wall as a tradeoff for protections for DACA recipients.