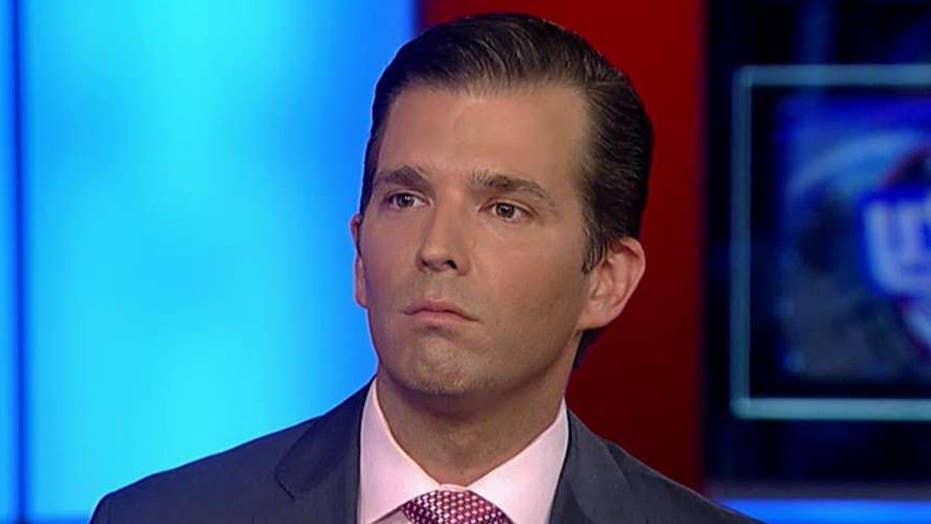 Don Trump Jr.: The media have done themselves a disservice

On 'Hannity,' the president's son discusses the double standard in the mainstream media, left-wing attacks

Editor's note: The following is a transcript of Todd Starne's opening monologue on The Todd Starnes Show. Click here to listen to the audio.

Based on the reporting by The New York Times there is still no hard evidence that Donald Trump Junior broke any laws. Now, his meetings with the Russians may have been ill advised, maybe even downright idiotic, stupid. But as near as I can tell, it's not illegal in this country to be stupid.

Click here for a free subscription to Todd's newsletter - a must-read for conservatives!

It's all a moot point anyway, because now that the special prosecutor is getting involved - Lord only knows what he is going to dig up.

If the Democrats and the Mainstream Media have their way, Donald Junior would be tried, convicted and executed for treason. They'd set up a guillotine right there in the Rose Garden.

“Off with his head!”

Or maybe you just want to get rid of the entire first family Romanov style -- maybe that's what they want.

What's it going to take to satisfy your blood lust?

These reporters, these Democrats, they disgust me. They're jackals foaming at the mouth, seething with fury and hatred for our president.

And by the way, where is the Republican leadership? Where are you Paul Ryan? Where are you Mitch McConnell? Are you hiding under your desk cavorting with Nancy Pelosi?

Get out there in front of the cameras and man up! Defend your president - you sniveling, lily-livered, morally bankrupt cowards.

You know the only people right now supporting and defending the president of these United States are We the People - all of the gun-toting, Bible-clinging, deplorable Americans who went to the polls on Election Day.

His defenders are the people that are despised by not just the Democrats but also the Establishment Republicans. They despise us all.

Let's talk about that - because I've got news for you, folks in the mainstream media: it's not going to happen.