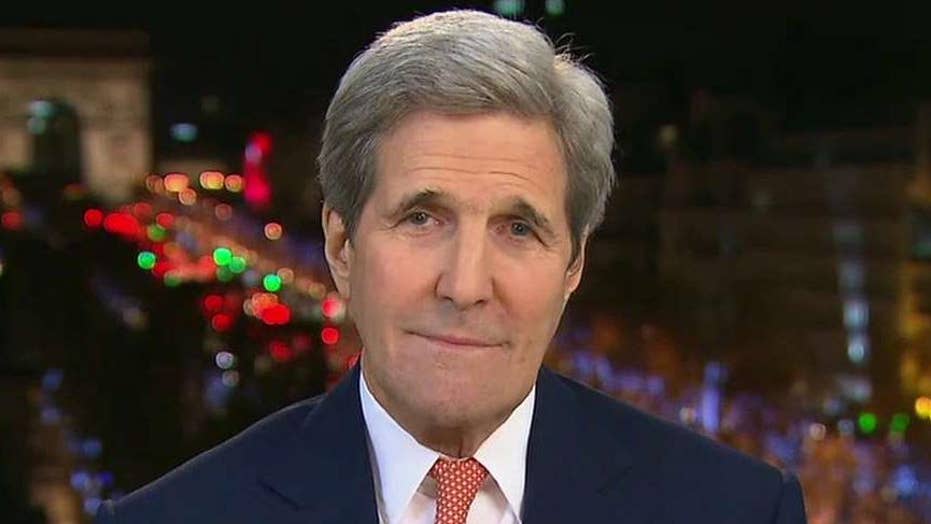 Kerry: Climate deal lacks penalties because of US Congress

As John Kerry is learning, it is not easy to defend  the just-signed Paris climate accord.

On Fox News Sunday this week, the Secretary of State, for example,  did his best to misrepresent the deal. Pressed on its actual contents, Kerry argued the deal had to be weak because anything stronger would require congressional approval and Congress would not approve.

In other words, President Obama lacked popular support to pursue a climate deal, so he had to do a deal even worse than the one for which there was no support.

Kerry began with the claim that “186 nations in the world came together to submit a plan, all of them reducing their emissions. ” But that is false. The so-called “plans” of major developing countries like China and India were in fact just vague pledges indistinguishable from the countries’ existing paths of rising greenhouse-gas emissions.

Some “plans” were even more vague. Pakistan (population nearly 200 million) offered a single page noting that at some point its emissions would stop going up, at which point they would hopefully start going down.

The 180-plus voluntary and often-meaningless pledges were actually in place before the talks even began, so U.S. negotiators knew what they were getting into.

The accord itself covers the ways to  track each country’s greenhouse-gas emissions, review performance vs.  pledges, and revise pledges over time. There are no enforcement mechanisms or penalties, only “peer pressure” for failing to follow through.

According to Secretary Kerry,  “One of the reasons why there’s no enforcement mechanism is because the United States Congress would never accept one. So it has to be voluntary.”

Unlike India and China, President Obama submitted a very aggressive pledge on behalf of the U.S., which committed us to sharply reduce our emissions over the coming decade. That pledge comes with neither the endorsement of Congress nor policies capable of achieving it.

The aggressiveness was intended to show “leadership” and inspire others to follow, which they did not. How, then, could the U.S. accept a deal where it made strong commitments but did not get anything similar in return?

That failure lies with the President and his negotiators; no one in Congress was discouraging the American delegation from demanding pledges comparable to its own.

Indeed, it is precisely this lack of reciprocity that most upsets the American people.

A widely publicized New York Times/CBS News poll last month found two-thirds of Americans wanted the U.S. to “join an international treaty requiring America to reduce emissions in an effort to fight global warming.” But a poll by Morning Consult that explained “developing nations, like India and China, may not have to reduce their greenhouse gas emissions at the same level as the United States” found support drop to 22%, including only 26 percent of Democrats.

So Kerry actually has things exactly backward. The weakness of the agreement quite reasonably leads to low support.

It is rather like blaming the victim to suggest low support is the cause of the agreement’s weakness. To the Obama administration’s endless frustration, America remains a democracy where the interests and preferences of the population carry some weight.

Secretary Kerry also told Chris Wallace rather bluntly that “we did exactly what Congress said we had to do for them not to be able to need to endorse it.”

Perhaps, alternatively, negotiators could have considered not pursuing an unpopular, bad deal for the country.

If they were feeling truly ambitious, they could have sought a deal that the American people would actually like.

In the coming years, when the agreement’s “review” provisions take effect, the countries that made empty promises should pass with flying colors. The U.S., despite taking the risks and incurring the costs, will appear off track and find itself targeted for disingenuous scorn from the countries doing the least.

This is a terrible deal not only for the American people but also for the environment, which will see little effect on greenhouse-gas emissions from the developing world’s promises to continue with business as usual.

Sooner or later, the reality of President Obama’s climate legacy will become plainly apparent. If the only explanation is “we had to do it this way so you wouldn’t have any say in it,” there will still be a lot of explaining left to do.

Oren Cass is a senior fellow at the Manhattan Institute for Policy Research.