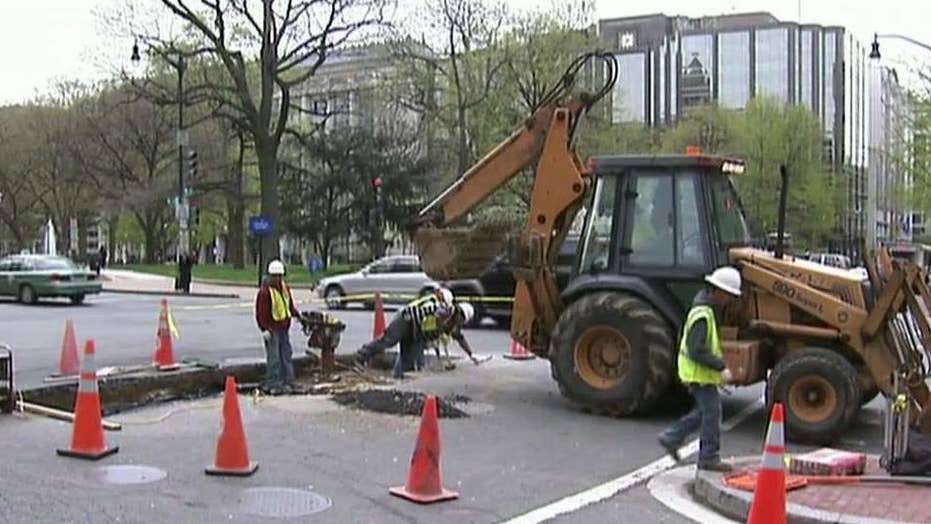 Washington never seems to run out of big-spending promises. And when House Speaker Nancy Pelosi, D-Calif., and Senate Minority Leader Chuck Schumer, D-N.Y., huddled with President Trump on Tuesday, they came up with a doozy.

Schumer emerged from the meeting to announce that the president wants Congress to come up with a bill that would spend $2 trillion on infrastructure — including roads, bridges, water systems and broadband.

Now, $2 trillion is a lot of loot. It’s almost twice as much money as is currently in circulation in the U.S. It’s also somewhere between two and 10 times as much as the administration talked about spending last year.

In 2018, the administration proposed putting up $200 billion in federal matching funds to generate $1 trillion in new investments. Previous proposals from Democrats, such as 2017’s $2 trillion 21st Century New Deal for Jobs, have relied exclusively on increasing federal spending.

It seems that this week's s talks never got around to figuring out where to get the money to make good on this latest promise. But one thing we do know for sure is that the feds already spend too much on infrastructure projects that are not proper national priorities. State highways, metro transit systems, and local initiatives should be paid for by the people who use them and the taxpayers of the state and local jurisdictions who benefit from them.

The federal government has a long history of blowing federal taxpayer dollars on projects that should be funded either by state or local governments, the private sector or, in some cases, not funded at all. From Alaska’s infamous “Bridge to Nowhere,” to California’s disastrous high-speed rail project, to protecting ritzy golf courses in New York, politicians from both parties have shown a willingness to waste billions of dollars in the name of “investments.”

Consider the federal gasoline tax. It’s supposed to be a user fee, paid by motorists, to go toward interstate highway maintenance and repair. Yet 28 cents of every dollar of gas taxes collected are diverted to other purposes: heavily subsidized urban transit systems, bike paths, even ferry boat terminals. While some of these may be worthy projects, they have no national significance and should not be funded by Washington.

By focusing on further regulatory reforms that reduce the federal government’s wasteful interference, America can have better infrastructure while avoiding higher taxes and a bigger debt.

A better alternative would be to reduce the federal gas tax and devolve much of the feds’ current infrastructure activity to the private sector and to state and local governments. They are much closer to the people than Washington bureaucrats and therefore more knowledgeable about — and responsive to — local infrastructure needs.

Even when the federal government does spend money on a worthwhile project, it often causes significant delays and cost increases due to red tape that is inevitably entangled with federal funding.

The process of applying for federal grants, and the necessary oversight by federal agencies that comes along with federal dollars, always means that projects take longer to complete.

Rules that artificially increase labor costs, such as the Davis-Bacon Act, and make inputs more expensive, such as “Buy American” rules, mean that federally funded projects give taxpayers less bang for their buck.

That is why an infrastructure package focusing on reducing regulation and streamlining the environmental review process rather than just shoveling cash at states and localities could deliver hundreds of billions of dollars in added value.

One other key consideration: there is no good way to cover the cost of a federally financed $2 trillion infrastructure package. Tax increases would reduce the flow of economic investment that is now driving the American economy to new highs.

A dangerous temptation for elected officials would be to avoid paying for the cost of new infrastructure spending altogether. This would be reckless.

With the federal debt in excess of $22 trillion, and a strong economy, now is the time to rein in the debt rather than add to it. Putting the cost of infrastructure on the national credit card would mean passing the bill to our children and grandchildren. That would be profoundly unfair.

President Trump’s greatest policy successes have been in deregulation and the implementation of a pro-growth tax policy. By focusing on further regulatory reforms that reduce the federal government’s wasteful interference, America can have better infrastructure while avoiding higher taxes and a bigger debt.

David Ditch is a budget and transportation associate in the Grover M. Hermann Center for the Federal Budget at The Heritage Foundation.