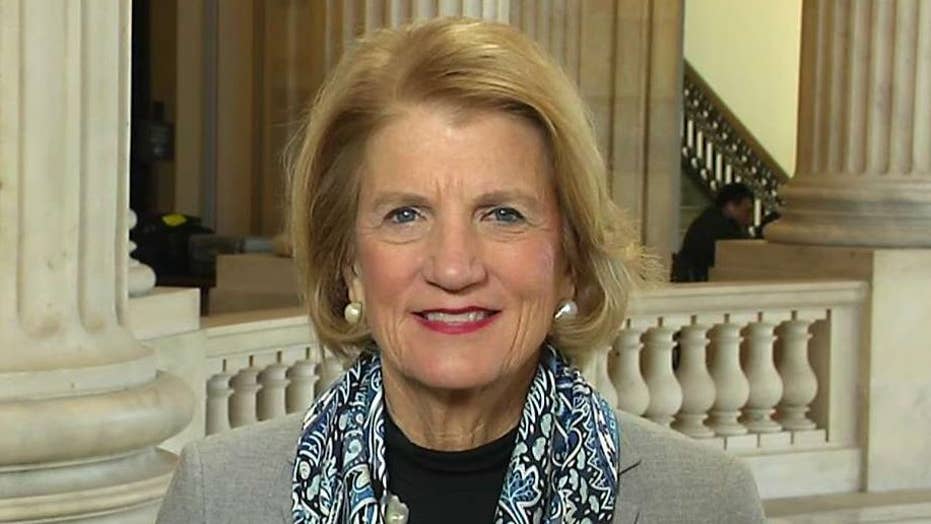 West Virginia Republican Sen. Shelley Moore Capito says there is data to back up that physical barriers are effective in slowing illegal immigration.

The left celebrated the reopening of the federal government last week as a “win” for House Speaker Nancy Pelosi, D-Calif. With no legislative agenda for the American people to speak of, the liberal media are now forced to create fake victories for the Democrats. But to President Trump and tens of millions of hardworking American taxpayers, allowing our border crisis to continue is no victory.

Speaker Pelosi’s message to fellow Democrats that “unity is our power” speaks volumes to what the left cares about most. Sadly, the government shutdown demonstrated that congressional Democrats are unified by their hatred of President Trump and gaining power above all else. To date, the security of the American people has been nowhere to be found on their list of concerns.

Destroying the Trump presidency by any means necessary appears to be Pelosi’s only goal, and the anti-Trump media are a co-conspirator in this disgraceful effort. Pelosi refuses to listen to the American people – which would mean compromising on an immigration fix – because she’s scared to death that the radical leftists in her party will remove her from power. This is not leadership. And it’s certainly nothing to celebrate.

Shamefully, the liberal media provide cover for Pelosi, Senate Minority Leader Chuck Schumer, D-N.Y. and fellow Democrats by ignoring President Trump’s repeated attempts at compromise on the divisive issue of illegal immigration, which is the mark of a true leader. President Trump is willing to take the heat from his base of supporters in order to find common ground to secure our border, and Speaker Pelosi is not. That’s a fact.

The level of dishonesty on the left is stunning. Just a few years ago, President Barack Obama called what’s happening on our southern border a crisis and the liberal media’s echo chamber got in line. That’s all been forgotten in 2019 because leftists hate President Trump more than they love their country. The fake news legions choose to look the other way instead of cover the real story.

It’s sickening that these entrenched career politicians are glad to take this gamble just to enhance their party’s position in the next election. In their unbridled quest for power, as violent criminals continue to cross our border and commit murders, the blood of innocent American lives is on their hands.

It’s sickening that these entrenched career politicians are glad to take this gamble just to enhance their party’s position in the next election. In their unbridled quest for power, as violent criminals continue to cross our border and commit murders, the blood of innocent American lives is on their hands.

When will the liberal mainstream media demand that Nancy Pelosi and Chuck Schumer release their plan to secure the border to the public? President Trump has been completely transparent articulating his vision to end this crisis. The president wants a border wall that’s effective in stopping the drugs, gangs, crime and violence that are flowing into our country as a result of illegal immigration. He’s also made clear that he’s willing to accept something the Democrats want in exchange.

Reports coming out of the border security conference committee on Capitol Hill tell a different story. It appears that congressional Democrats are keeping their border security proposal hidden from the public because it contains zero dollars for a border wall. The American people want honest, open negotiations and real results, but the liberals continue to play political games.

The president has taken a strong position because border patrol professionals are telling him that walls work. If Nancy Pelosi went to the border, she would be told the exact same thing. But she doesn’t want to hear the truth. The biased media allows the Democrats to obstruct President Trump without ever pinning them down on their own position.

President Trump is not a typical politician, so he won’t give up. The false narrative that President Trump has broken his pledge to secure the border is a boldfaced lie. This fight isn’t over and the American people appreciate the president’s resolve.

The government will partially shut down once again on Feb. 15 if Congress doesn’t hammer out a reasonable plan to finally secure our border and end this crisis. The president has called out the Democratic leadership in Congress and the time has come for them to negotiate.

The American people are about to find out if the Democrats will listen to their wishes and send President Trump a bill that secures our border in an effective way.