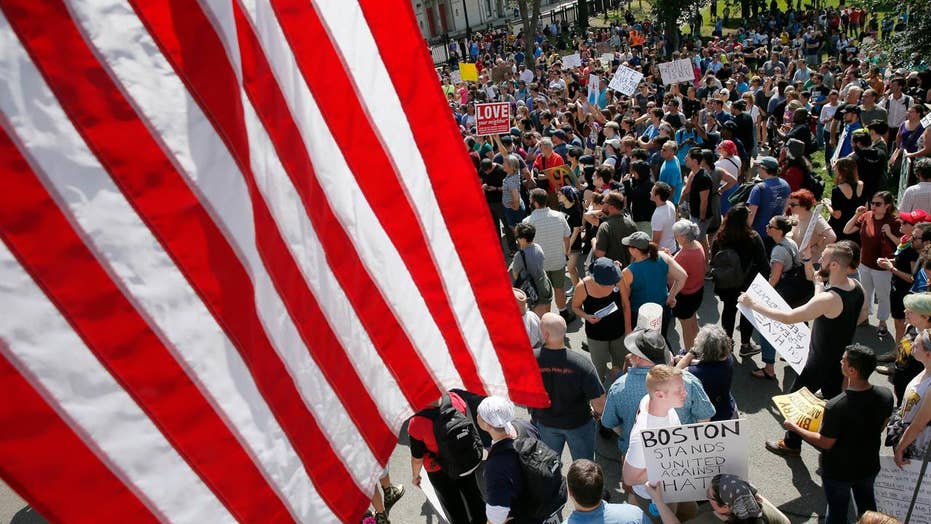 What impact will Boston protests have on politics?

The tragic events in Charlottesville seemed almost too good to be true from the point of view of the mainstream media and the political left.  On the one side were the neo-Nazis and Ku Klux Klansmen who seemed to be for Trump; on the other were the valiant leftists fighting against racism, Nazism and white supremacy.

So I’m not surprised the left-wing press has obsessively pursued this narrative, which it also tried to impose on the Boston free speech rally this past weekend.  The narrative confirms leftists in thier belief that Trump is the embodiment of fascism and white supremacy, and that racism and Nazism are on the right.

Looking back at Charlottesville, I am struck by the anomaly that the whole controversy erupted over the campaign to take down a monument to Robert E. Lee.

Now again, this is strange on the face of it. Although Lee inherited a few slaves on his wife’s side, he condemned slavery as a moral and political evil and looked forward to its end. Lee also opposed secession.  So how can a man opposed to slavery and secession become, for the left, a symbol of slavery and secession?

Part of the Democrats' big lie is to shift the blame for slavery from themselves to the South.

I realized that in heaping opprobrium on Lee, the left was advancing one of its big lies. This is the lie that the South is to blame for slavery. In this view the slavery debate was entirely a North-South debate. But in reality it was not so. Certainly the secession debate of 1860-61 was between the North and the South. The slavery debate, however, which lasted from the 1820s through 1860, was between the anti-slavery Republican Party and the pro-slavery Democratic Party.

Part of the Democrats’ big lie is to shift the blame for slavery from themselves to the South. This licenses leftist intimidation, vandalism and even violence in the name of fighting Southern bigotry. But let’s remember that most Southerners did not own slaves. Most Confederate soldiers did not own slaves. Let’s also recall that the Northern Democrats led by Stephen Douglas supported slavery with the same resourcefulness and determination as the Southern Democrats.

Watching the white nationalists in Charlottesville sporting hats that said “Make America Great Again,” I asked myself, why would these guys support Trump? Here’s my theory. Ordinarily these guys belong in the Democratic Party.  The Democratic Party, after all, invented white nationalism and used it for almost a century to maintain their political supremacy in the South.

In the end, we shouldn’t worry too much about a bunch of rag-tag white nationalists and Klansmen who have very little power in America today.

If the Klan holds a rally anywhere in America, they can hardly produce more than a few dozen people, and those people are inevitably encircled by a vastly larger and stronger group of counter-protesters. Skinheads, Klansmen and neo-Nazis don’t control corporations or cultural institutions and so their influence is severely limited.

The most dangerous fascism doesn’t come from these losers.

It comes from those who have the power to shut down free speech on campus.

It comes from the studio bosses who destroy the careers of those who don’t succumb to their political orthodoxy.

It comes from deans who manage billion-dollar endowments who can ruin the academic future of dissenters and make them into pariahs.

It also comes from journalists who use their power of expose and humiliate, to browbeat people into submission to political correctness and an ideological agenda. And politicians like Barack Obama and Hillary Clinton who use the power of the state—the FBI, the Justice Department, the IRS—against their political adversaries.

This fascism of the institutions is far more dangerous than the fascism of the street, and this type of fascism comes entirely from the political left.