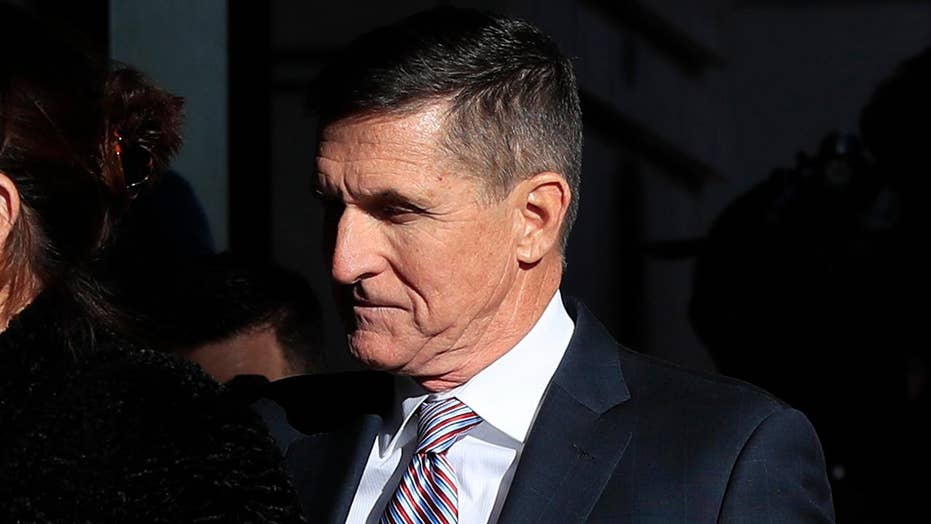 Michael Flynn's sentencing for giving false statements to the FBI on Russia contacts is delayed for the fifth time amid his cooperation with special counsel Robert Mueller and the Department of Justice. New York Times reporter Adam Goldman and former federal prosecutor Jon Sale react on 'The Daily Briefing.'

Flynn was scheduled to be sentenced Tuesday on his guilty plea to a charge of lying to the FBI in its probe of alleged collusion between the Trump presidential election campaign and Russia in 2016.

However, this case is now on hold until a hearing March 13. Rather than lock him up at that time, U.S. District Judge Emmet G. Sullivan should set Flynn free and throw out the charge to which Flynn pleaded guilty.

The first issue was the Kremlin’s possible reaction to President Obama’s expulsion of Russian diplomats in response to Moscow’s interference in the 2016 U.S. presidential election. The second was a United Nations vote on Israeli settlements on the West Bank.

While Flynn’s answers on January 24, 2017 to his FBI interlocutors (the disgraced, Trump-loathing Peter Strzok and another unnamed agent) were incorrect, Flynn seemed to have nothing to hide from the agents.

According to the FBI notes, Flynn spoke openly about his contacts with Russian officials, starting with a 2013 official visit to Russia while he was in the Army and directed the Defense Intelligence Agency.

Flynn maintained and enhanced communications with Russians for several years, up to and including the presidential transition period after Donald Trump was elected president. This was normal and appropriate for an incoming national security adviser, so that the new Trump administration could begin conducting diplomacy with foreign powers starting on Inauguration Day.

The FBI notes on the interview with Flynn state: “Flynn’s interest in Russia was as a common partner in the war on terror. Flynn does not know if (Russian President Vladimir) Putin and Trump will get along, but it is Flynn’s job to figure out paths to work with Russia to fight terrorism.”

Flynn confirmed and openly discussed several meetings and phone conversations with Kislyak. The FBI document notes that Flynn’s “intent was to try to keep the relationship with Kislyak going. Flynn expanded that he has no particular affinity for Russia, but that Kislyak was his counterpart, and maintaining trusted relationships with foreign governments is important.”

In this context, Flynn’s communications with Russian officials sound much less like electoral collusion and much more like he was trying to keep things calm between Earth’s largest nuclear superpowers, so that we would blow up ISIS and other terrorist groups rather than each other.

The FBI document shows Flynn speaking openly and candidly about his contacts with Kislyak and other Russians. If Flynn had wanted to conceal such connections, it seems he would have lied much more broadly and denied much more.

Against this backdrop, Flynn’s two apparent false statements to Strzok and his FBI colleague seem more a matter of inexactitude or Comeyesque amnesia rather than full-blown deceit. In closed-door testimony earlier this month, fired FBI Director James Comey told the House Judiciary Committee “I don’t recall” eight times and “I can’t remember” 72 times.

Indeed, “Deputy (FBI) Director (Andrew) McCabe acknowledged that ‘the two people who interviewed (Flynn) didn’t think he was lying, (which) was not (a) great beginning of a false statement case,’” the House Intelligence Committee reported in May.

An FBI 302 file (the name the FBI gives interview notes) on Flynn’s interview with Strzok and his colleague concurred: “Throughout the interview, Flynn had a very ‘sure’ demeanor and did not give any indicators of deception. He did not parse his words or hesitate in any of his answers. He only hedged once, which they documented in the 302. Strzok and (redacted) both had the impression at the time that Flynn was not lying or did not think he was lying.”

Rather than being fidgety, shifty and evasive – like a liar – the 302 says that “Flynn was unguarded and clearly saw the FBI agents as allies.”

The 302 also describes Flynn as “relaxed and jocular.” It says that Flynn walked the FBI agents through the West Wing of the White House, showed them around his office, and spoke casually about “various subjects” – not least “the President’s knack for interior design.”

According to the 302, which had an official “date of entry” of Aug. 22, 2017 – nearly seven months after the interview: “Flynn was so talkative, and had so much time for them, that Strzok wondered if the national security adviser did not have more important things to do than have a such a relaxed, non-pertinent discussion with them.”

These facts alone paint Flynn as less a liar than someone who unwittingly misstated or forgot several details – for which he now faces potential prison time.

But Judge Sullivan should let Flynn walk, and not just because he may lack a photographic memory. Instead, Flynn should be liberated due to the FBI’s evident misconduct.

According to recent news reports, the FBI encouraged Flynn to meet Strzok and his fellow interrogator without the benefit of legal counsel. In another redacted FBI document dated January 24, 2017, an apparent FBI official writes:

“I explained to LTG Flynn that my desire was to have two of my agents interview him as quickly as possible. He agreed and offered to meet with the agents today. … I explained that I thought the quickest way to get this done was to have a conversation between him and the agents only. I further stated that if LTG Flynn wished to include anyone else in the meeting, like the White House Counsel for instance, that I would need to involve the Department of Justice. He stated that this would not be necessary and agreed to meet with the agents without any additional participants.”

Last week on MSNBC, fired FBI Director James Comey admitted that he avoided normal procedures in Flynn’s case. “If the FBI wanted to send agents into the White House itself to interview a senior official, you would work through the White House counsel, and there would be discussions and approvals of who would be there,” he admitted.

Instead, on its fourth day in office, Comey took advantage of the neophyte Trump White House and its staff, and sent the agents anyway. “I thought: It’s early enough, let’s just send a couple guys over.”

Comey bragged that this was “something I probably wouldn’t have done or maybe gotten away with in a more … organized administration.”

The fact that the FBI encouraged Flynn to exclude his or the White House’s lawyers from the interview is a brand new monument to Miranda rights abuse.

The Supreme Court ruled in a 1966 case, Miranda V. Arizona, that all Americans have the right to have an attorney present when speaking with law enforcement and need to be warned that they have the right to remain silent, and that anything they say can and will be used against them in a court of law.

It would be bad enough had the FBI not reminded Flynn of this right. But to go the extra mile and bamboozle him into excluding an attorney during what Flynn seemingly considered a friendly chat was abominable.

The idea of Flynn going to prison because the FBI “got away with” hoodwinking him out of having an attorney on hand as he was grilled by FBI agents reeks of the legal systems in Venezuela or Russia, where the accused do not have legal protections that Americans enjoy. The FBI should not get into the habit of un-Mirandizing interrogation subjects.

"I hope this results in an investigation by the inspector general of the tactics used by the FBI," Harvard Law School Professor Emeritus Alan Dershowitz said Tuesday on Fox News Channel's “America's Newsroom.”

Indeed, Flynn had to sell his house to pay his attorneys. Such financial ruin has befallen Special Counsel Robert Mueller's victims – even witnesses not accused of crimes who drown in lawyers' bills simply to testify.

Judge Sullivan should vacate Flynn's guilty plea, dismiss charges against him, order the FBI to pay his legal fees, and sanction Mueller and his band of enraged Democrats for this grotesque miscarriage of justice.