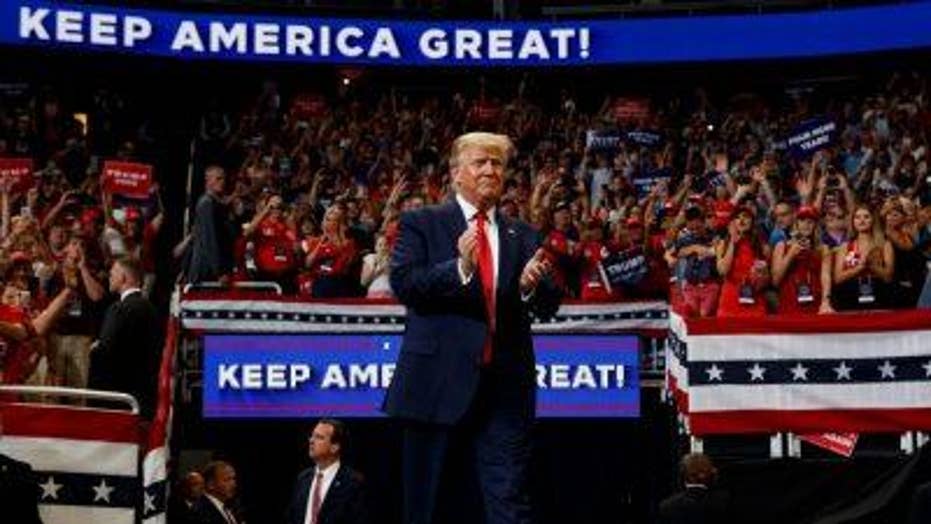 President Trump formally announced to a crowd in Orlando Tuesday night he is running for re-election in 2020 and appeared to embrace the new campaign slogan “Keep America Great.”

His supporters cheered him at televised watch parties from coast to coast. They are girding their loins for a major fight with whoever the Democrats nominate to challenge him next year.

Trump approaches this race with abundant strengths. But he needs a better slogan.

Trump’s 2016 motto was as good as they come. “Make America Great Again” inspired some 63 million people to look past eight years of stagnation, weakness, and self-flagellation under President Barack Obama. Instead, these voters heeded Trump’s call to imagine America as it was as recently as the 1980s – a vibrant, optimistic, forward-looking, free-market superpower.

In just under two-and-a-half years, President Trump has delivered on this broad promise and fulfilled scores of specific pledges. Even his foes must admit that the man actually has done most of what he said he would do. For example:

Largely due to Democratic intransigence, some promises have yet to be kept. ObamaCare’s repeal and replacement awaits, although the individual-mandate tax is dead, and Team Trump has expanded patient-choice options.

The southern-border wall is a work in progress, with 45 miles reinforced so far. Thanks to the group We Build the Wall, privately funded barriers are being erected on private property. But miles remain before America’s underbelly resembles rock-hard abs rather than beer-fueled paunch.

Perhaps to summarize this, President Trump told the crowd at his announcement that he now likes the slogan “Keep America Great.” The sooner he abandons it, the better.

Perhaps to summarize this, President Trump told the crowd at his announcement that he now likes the slogan “Keep America Great.” The sooner he abandons it, the better.

Keep America Great is not an appeal to acceleration. It’s a call for stasis.

Keep America Great says, in so many words: “Well, folks, we did it. Here we are. This is as good as it gets. Please vote for me and the GOP, and we will tread water for four years. Come 2024, things will look pretty much like this.”

This is neither inspiring nor aspirational. At most, it’s self-congratulatory. “We’ve earned our laurels. Now, let’s sit on them.”

Here is a far better slogan: “Make America Even Greater.”

“Make” challenges every American to get involved and help President Trump accomplish something. “Keep” says that this something has been achieved and merely needs maintenance, like watering a plant. Americans should manufacture, not just maintain.

“Greater” recognizes that some level of advancement has been achieved. This acknowledges the promises that Trump has kept and, thus, the improvements that most Americans are enjoying.

“Even Greater” underscores the unfinished agenda. “Folks, this is not the end of the road. We’re less than halfway there. Please vote for me and the GOP, and happier days will follow.”

Make America Even Greater tells voters: “America is in better shape than when Trump arrived, but there is plenty more to do. So, let’s get busy.”

Rather than tread water with “Keep America Great,” voters should swim energetically ahead and “Make America Even Greater.”

President Trump should run for re-election on a slogan that tells voters that the best is yet to come. That battle cry is: Make America Even Greater.