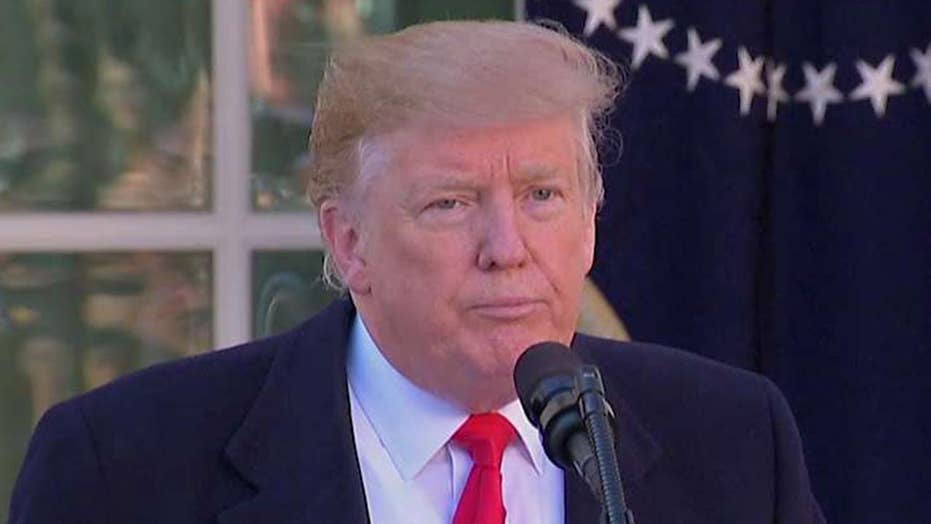 President Trump praises federal workers and their families, announces that he will sign a bill to open the government for three weeks until February 15.

President Trump’s agreement with congressional leaders Friday to reopen the government until Feb. 15 has temporarily put off the confrontation with Democrats over his call for $5.7 billion to build a wall along part of our southern border.

The House and Senate both passed a short-term spending bill after President Trump announced the agreement and the president signed the measure Friday night, ending the partial government shutdown that began Dec. 22. There is no border wall funding in the bill.

The legislation will enable 800,000 federal workers to start collecting paychecks again and get back to work. But we’ll be back to Square One in three weeks if Democrats refuse to budge in their stubborn opposition to providing any funding for a wall that is obviously needed as an important element of border security.

The illogic of the Democratic opposition to providing any funding for a border wall, fence or other barrier is mind-boggling, because most Democrats who’ve served in Congress for several years have voted to fund border fencing in the past.

President Trump has been more than reasonable in offering compromises to the Democrats. He announced last weekend that he would extend protections against deportation for three more years to 1 million immigrants now taking part in two programs he has been trying to end – if Democrats agree to give him $5.7 billion in border wall funding.

That’s a major concession to the 700,000 young immigrants brought to the U.S. illegally as children who are now protected from deportation by the DACA (Deferred Action for Childhood Arrivals) program. It’s also a big concession to another 300,000 immigrants who remain in the U.S. under temporary protected status after they came here following natural disasters and other calamities in their home countries.

But if Democrats refuse to compromise from their insistence on refusing to provide any money for a border wall or barrier of some sort we’ll be back in crisis mode in three weeks. That would be bad news for all Americans, regardless of their political affiliation.

President Trump indicated Friday that if no agreement is reached with Congress by Feb. 15 to fund the border wall that he has promised repeatedly to build he would declare a national emergency and order the U.S. military to build the wall, using Defense Department funds.

The idea of simply declaring an emergency and building the border wall without getting approval from the House and Senate understandably must sound appealing to President Trump.

But my strong advice to the president – speaking as a Republican who represented a Pennsylvania district in the House from 1977 to 1997 – is that he should not under any circumstances declare a national emergency to get wall funding.

But my strong advice to the president – speaking as a Republican who represented a Pennsylvania district in the House from 1977 to 1997 – is that he should not under any circumstances declare a national emergency to get wall funding.

Any attempt by the president to go around Congress to fund a border wall by declaring a national emergency would be sure to generate lawsuits. Those lawsuits could take years to wind their way to the Supreme Court, probably assuring that the wall could not be built in the president’s first term.

And if President Trump’s decision to spend billions of dollars without congressional approval by declaring a national emergency was upheld by the Supreme Court, the checks and balances in the Constitution that make Congress a co-equal branch of government could be tossed out the window. That would set a terrible and dangerous precedent.

Imagine a future Democratic president declaring climate change a national emergency and ordering a ban on coal mining and drilling for oil and natural gas, along with the closure of nuclear power plants.

The nightmarish possibilities of “national emergencies” that future presidents could declare are endless. A president empowered to spend money without congressional approval could give us exactly what the Founding Fathers wanted to prevent – one-person rule by a president with vastly greater powers who could ignore the will of our elected representatives in Congress.

While $5.7 billion is certainly a lot of money, it’s just a tiny fraction of the federal budget. So it’s hard for most rational Americans to understand why the fight over this amount of funding for a border wall turned into battle between President Trump and Democrats that resulted in the longest government shutdown in U.S. history.

In fact, the real reason for the shutdown was that House Speaker Nancy Pelosi, D-Calif., and President Trump were on a collision course that resulted in a wreck.

President Trump decided Friday that the American people needed their government to reopened, so stepped forward and agreed to the three-week plan to bring federal workers back to their jobs without the wall funding that he wants. Now Pelosi and Senate Minority Leader Chuck Schumer, D-N.Y., need to compromise as well so there’s not another shutdown or a declaration of a national emergency by President Trump.

Candidate Trump made it very clear in his 2016 campaign that he intended to secure the border by building a wall and taking other important steps. Throughout his presidency, Trump has shown that he is intent on keeping his campaign promises.

The president has never wavered on his determination to build the wall, but on several occasions has deferred to Congress on the timing for wall funding because of immediate fiscal concerns. He was told that the border security issue would be handled at the end of the year. When that promise evaporated, he decided to make his stand.

The election of a Democratic majority in the House exacerbated the situation. That new majority is made up of factions – and a substantial number of representatives wanted a change of leadership in their caucus and in the House.

Consequently, Pelosi had a difficult battle to find the votes to elect her to the speakership. Many new Democratic representatives and some firebrands from the past were passionately anti-Trump and heavily focused on electing a speaker who would oppose President Trump at every turn. To them, the wall stood as a symbol of everything they hate about the president.

What we know of Speaker Pelosi’s quest for her job was that there were many accommodations made to the Democratic dissidents. The question that should be asked of Pelosi now is: “In the course of your campaign for the speakership, did you promise anyone in your caucus that you would stand firm for absolutely no funding for the wall?”

I don’t know the answer to that question, nor do I know whether it has been asked. But there is every reason to suspect that the wall was a subject of discussion in Pelosi’s campaign to become speaker and that she led the rebels to believe she would never allow wall funding to proceed. She could be trapped by what she had to promise in her quest for power.

There is a provision in the House rules that allows a majority of members to remove the speaker from office. Such a motion has never succeeded, but if far-left Democrats angered by a future Pelosi move to provide some border wall funding joined forces with Republicans they might be able to force Pelosi out of the speakership.

The threat of that happening is likely contributing to Pelosi’s refusal until now to make reasonable compromises with President Trump on border security.

Let’s hope Pelosi decides to put the welfare of the nation ahead of political considerations and the preservation of her position. She and Sen. Schumer should meet President Trump halfway and avoid another government shutdown or declaration of a national emergency by the president. Our national interest requires such a compromise.