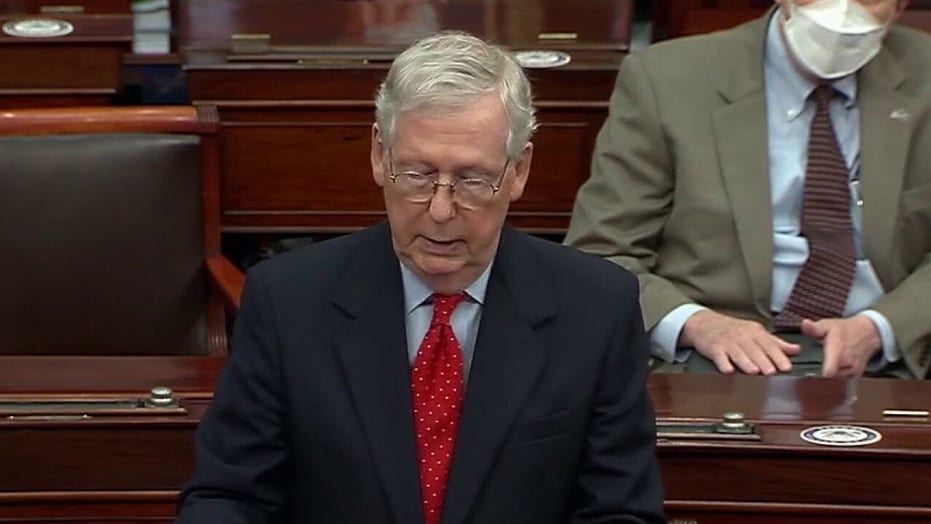 GOP leaders say they're trying to get Democrats to agree to some targeted relief measures, but Democrats say the proposals are non-starters; congressional correspondent Chad Pergram reports.

We are watching a fascinating, bold and audacious effort by Senate Minority Leader Chuck Schumer, D-N.Y. to steal the U.S. Senate seat in Kansas.

While Sen. Pat Roberts, R-Kan., is retiring after four terms, this would normally be a safe Republican seat. In fact, no Democrat has won a U.S. Senate seat from Kansas since 1932. This 82-year record of Republican senators (since the election of Sen. Clyde Reed in 1938) is the longest of any state in the country.

The Democrats are running State Senator Barbara Bollier, a Republican-turned-Democrat. She would normally be expected to run a good race, get 45 percent or less, and stay in Kansas.

NO SOUTHERN HOSPITALITY IN GOP SENATE CLASH IN TENNESSEE

However, Schumer and the Washington Democrats have come up with a clever scheme to change history, break the Republicans’ biggest winning streak and steal the Kansas seat to help take over a majority in the US Senate.

As Rollcall put it on June 8: “Kobach is viewed as a headache for Republicans because his 43 percent showing against Kelly was the worst by a statewide GOP candidate in at least a decade.... The Democrats’ best and maybe only, bet continues to be against Kobach.”

Kobach is seen as so unacceptable that one poll shows 29 percent of GOP primary voters would support Bollier instead.

Ironically, even though Kobach is arguably the most conservative candidate in the race, his unpopularity has made him the Schumer candidate.

The Democrats understand that if they can help Kobach win the Republican primary, they will dramatically increase their chances of winning a Kansas U.S. Senate seat for the first time since 1932. So, that is exactly what they are doing.

The Democrats have invented Sunflower State PAC, which has already spent $2.5 million propping up Kobach and attacking Congressman Roger Marshall, R-Kan. The PAC will spend another $2.2 million against Marshall before the primary Tuesday.

As James Arkin reported in Politico on July 15: “Sunflower State has apparent ties to Democrats. The media buyer used to place the ad, Old Town Media, was also used to place more than $11 million in ads from Unite the Country, the pro-Joe Biden super PAC that spent heavily in the Democratic presidential primary. Sunflower State also holds its account at Amalgamated Bank, which is used by Senate Majority PAC, a top Democratic outside group, among other prominent Democratic groups, including Biden's campaign, according to the filing with the Federal Election Commission.”

Congressman Marshall represents Kansas’ First Congressional District. His district produced both Sens. Bob Dole (who just turned 97), Roberts and Jerry Moran. Marshall is a solid conservative Republican who would normally be a shoo-in for the primary and would easily win the general election.

Marshall is a medical doctor specializing in obstetrics and gynecology. He has effectively represented the agricultural interests of his overwhelmingly rural district for his entire time in Congress. He is a reliable Republican vote in the US House – and in this Congress, he has scored 98 percent on the Heritage Action Committee voter rating.

Govtrack ranked him the 15th most conservative member of the House. The U.S. Chamber of Commerce gave him a 90 percent lifetime score for his votes. In other words: Congressman Marshall is squarely Republican with a conservative and pro-business voting record.

And, of course, a Sen. Marshall would help keep McConnell as the senate majority leader and be a big step toward keeping Schumer in the minority.

There is a lot at stake in the Tuesday primary in Kansas. In fact, it may well be the real senatorial election for 2020 in that state.