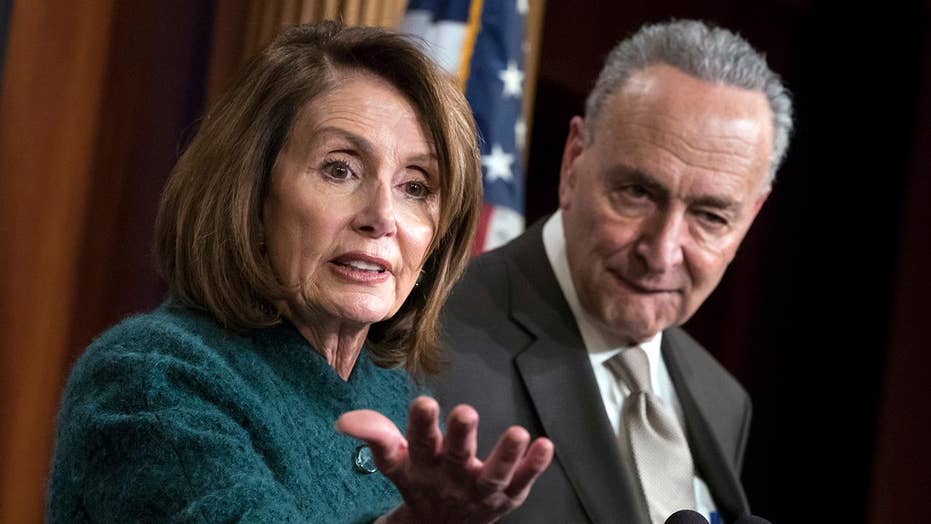 Do the Democrats have a 2018 platform problem?

Will House Speaker Paul Ryan’s retirement increase the odds of President Trump’s impeachment? Maybe, but Democratic leaders don’t want to talk about it.

President Obama’s former Attorney General Eric Holder and former top Obama campaign strategist David Axelrod, among others, want their liberal allies to shut up about impeaching President Trump. They fear that threats to drive the president from office will boost voter turnout – not among Democrats, as some on the left hope, but rather among Republicans.

Axelrod tweeted recently: “Dems should NOT commit to impeachment unless & until there’s a demonstrable case for one…. If we “normalize” impeachment as a political tool, it will be another hammer blow to our democracy.”

Holder tweeted in response: “Ax is exactly right. Midterms can be, among other things, a referendum on this Administration, its policies and its supporters - at federal and state levels. Midterms should not be centered around questions of impeachment.”

Trump supporters consider the president under siege. They are livid that Democrats have blocked his agenda – and indeed the functioning of the government – through their brick wall of “resistance.”

Why this high-minded stance? Because the savvy politicos see Republicans beginning to score with that potent “political tool.”

GOP fundraising outfits are busily alerting voters that if Democrats take over the House, they will vote to remove the president from office. They warn of a “coup” by the extreme left against the “duly elected president.”

The House can vote to impeach by a simple majority, but it would require a two-thirds vote in the Senate after a trial to actually send the president packing.

Not only do Republican organizers hope alarming anti-impeachment messages will pump up fundraising; they also expect the messages will boost voter turnout.

These Republicans are almost certainly correct. Trump supporters consider the president under siege. They are livid that Democrats have blocked his agenda – and indeed the functioning of the government – through their brick wall of “resistance.”

Trump supporters also think the media are grossly unfair. Eighty percent of Republicans think journalists make up stories about the president, according to Quinnipiac. They are also increasingly skeptical of the investigation into alleged collusion between Russia and the Trump campaign.

A Quinnipiac poll shows only 52 percent of the country thinks Special Counsel Robert Mueller’s Russia probe is fair – the lowest level of support since the organization began tracking the topic last November. Some 54 percent of Republicans think the inquiry is “unfair.”

In short, Democrats may be underestimating President Trump’s continued support within his own party, and the growing sense of injustice among Republicans. Any whiff of impeachment will send the president’s furious backers charging to the voting booth, if not to the barricades.

This is important because midterm elections are decided by who shows up. Historically, off-year election participation is nearly always lower than during the presidential cycle. The amount of the drop-off is critical.

According to the Pew Research Center, “the GOP’s victory in the national popular vote in 2010 – and their gain of 63 seats in the House – was ultimately fueled by a sharp rise in turnout by the Republican base, particularly among conservatives and older voters.”

Not since 1938, when Franklin D. Roosevelt’s Democrats suffered a crushing 71-seat loss, has any president suffered such a “shellacking,” as President Obama himself called it.

Democrats hope to turn the tables in November. Instead of Tea Party activists driving turnout, progressives expect the anti-Trump fever that has sparked so many demonstrations over the past year to translate into a blue wave in November. They think the promise to impeach the president will add fuel to the left’s fire.

Democratic Party leaders like Senate Minority Leader Chuck Schumer of New York and House Minority Leader Nancy Pelosi of California have urged caution, with the latter telling CNN: "It's not someplace that I think we should go.”

Rep. Adam Schiff of California, ranking Democrat on the House Intelligence Committee, recently said: “I’ve been urging members to refrain from discussing impeachment; I think we should let these investigations conclude and see what evidence is found.”

Nonetheless, many on the left are charging ahead, encouraged in part by super donor Tom Steyer, who has earmarked $20 million for candidates who climb aboard his “Need to Impeach” campaign.

That may be why someone like Rep. Beto O’Rourke of Texas – the liberal darling running to unseat Texas Republican Sen. Ted Cruz in November – recently told a radio interviewer that he would vote to impeach the president.

Though in December O’Rourke declined to back such a measure brought to the floor by fellow Texan Al Green, O’Rourke has seen the light, now telling listeners that he thinks President Trump is guilty of attempting to collude “with a foreign government in our national election … (and to) obstruct justice in the investigation of what happened in the 2016 election.”

The New York Times suggested in a recent piece that impeachment talk is the stuff of fevered right-wing imaginations and a useful strategy as Republicans try to “stave off a Democratic wave.” The newspaper reported that what started as “blaring political hyperbole on the right” has now entered the GOP mainstream.

When the principal vocalist for impeachment was California Democratic Rep. Maxine Waters the threat seemed almost benign. But Steyer shocked many by gathering 4 million online signatures from activists last fall, creating what Politico described as an “avalanche of grass-roots support” for impeachment.

In addition, as the Times admits, Democrats have already held two impeachment votes in the House. In the most recent one, in January, 66 Democrats – over one third of the caucus – voted to initiate impeachment proceedings, up from 58 in a December headcount.

So, maybe not so fevered after all.