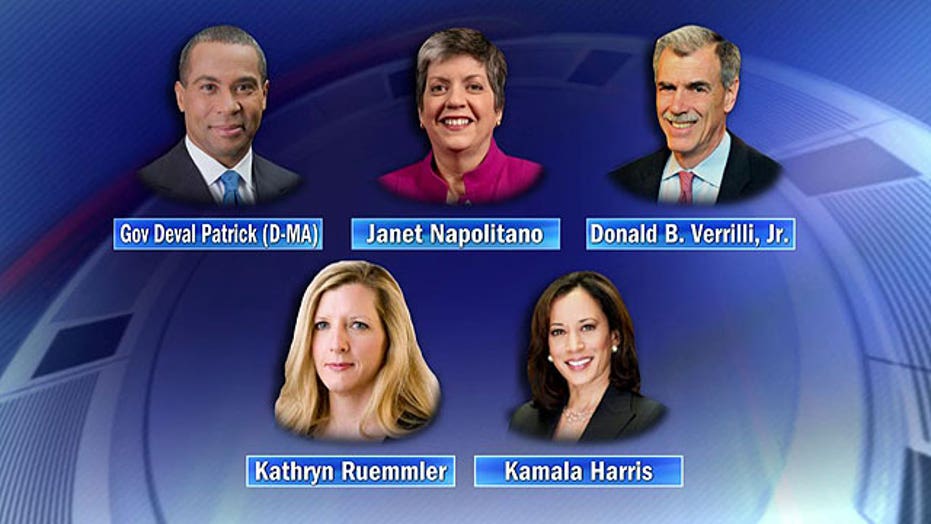 Who will succeed Eric Holder as attorney general?

When Richard Nixon made a show of quitting politics in 1962 he famously taunted his liberal critics in the media saying “you won’t have Nixon to kick around anymore.”

The question on my mind today is: what are conservatives going to do now that they don’t have Eric Holder to kick around anymore?

Holder announced Thursday that he will step down as the Attorney General of the United States as soon as his successor is confirmed. Given the poisonous politics in Congress these days and the prospect of a Republican takeover of the Senate next year, finding a successor who can win confirmation could take quite a while.

Here’s how the first line of The New York Times story about the Holder resignation read: “Replacing Mr. Holder, who provoked the ire of Republicans as President Obama's chief liberal warrior, could be a political nightmare.”

To my eyes Holder’s tenure is the latest episode of a much bigger political nightmare that has been going on for decades under both Republican and Democratic administrations.

The Justice Department has devolved into the heart of Washington darkness, the absolute pit of modern political polarization in my lifetime.

In the last 20 years there is a direct line of partisan political attacks on the Justice Department from Waco to “Torture Memos” to the “Fast and Furious” episode. The GOP House hit bottom with its historically sad decision to hold this attorney general in contempt of Congress.

The truth is that Holder deserves to be celebrated as the attorney general who rebuilt a broken federal agency and restored its reputation.

Recall that it was the Bush Justice Department that gave us the U.S. Attorney scandals where federal prosecutors were encouraged to go after Democratic officials and political opponents of the president. It was also the Bush-era DOJ that gutted the Civil Rights Division which historically policed violations of civil rights and voting rights.

Holder, with the help of Thomas Perez, the former head of the civil right division and currently the labor secretary, restored that division’s integrity from the wreckage they inherited.

For Holder, civil rights issues were deeply personal. He is the brother-in-law of the late Vivian Malone, one of the African American students blocked from entering the University of Alabama by Governor George Wallace.

Unlike his predecessors, he aggressively pursued violations of Americans’ voting rights and asserted the Department’s power under the preclearance provision of Section 5 of the 1965 Voting Rights Act.

When GOP governors and state legislatures tried to disenfranchise, young people, the poor and especially minority voters – central components of the Democratic coalition --  by ending early voting, purging voter rolls and requiring photo identification, Holder pushed back. That was not a political act. He stood up because anyone representing the Constitution has an obligation to defend every American’s right to vote.

As the nation’s first African American Attorney General, Holder gave conservatives heartburn when he said that in many respects, the U.S. had been “a nation of cowards” when it came to race. Holder’s words are important to maintaining trust in the nation’s system of justice among people of all races as the nation reaches new heights of racial diversity.

And note that he won support from conservatives like Senator Rand Paul , R-Ky. and Texas Governor Rick Perry in pushing for changes to mandatory minimums for low-level drug offenses that contribute to high rates of jail time for people of color.

Instead of supporting Holder in those efforts, the Republican House of Representatives took the unprecedented step of voting to hold him in contempt of Congress over the “Fast and Furious” operation. What the Republicans conveniently forgot is that the Justice Department’s first duty is as a law enforcement agency. Republican and Democratic prosecutors agree the documents supposedly being “withheld” were required for prosecution of criminals and would have been useless in court if they became political fodder.

Also, the GOP scandal mongers conveniently forgot that the “gun-walking” program started under the Bush administration and it was Holder who ended the program.

As with so many of the “controversies” Republicans attacked Holder over, the criticism said more about the critics than it did Holder.

But the larger problem for our government – politicization of the attorney general's role – neither began nor ended with Eric Holder.

Democrat President John F. Kennedy famously raised eyebrows by appointing his brother Bobby Kennedy as the nation’s top law enforcement officer. This put RFK in a position to cover JFK’s political back as the two brothers worked to advance what was, at the time, a very progressive agenda - especially on civil rights.

Republican Richard Nixon appointed one of his closest friends and campaign advisors, John Mitchell as Attorney General. Mitchell is widely regarded as the most corrupt Attorney General in U.S. history because of his involvement in the Watergate scandal and CREEP (the Committee to Re-elect the President). Mitchell served 19 months in prison because of the crimes he committed as Nixon’s A.G.

Republican Ronald Reagan was similarly criticized for appointed Edwin Meese as his attorney general. Meese had been one of Reagan’s closest friends and political advisers, having served as his chief of staff when he was governor of California. Meese was said to be instrumental in protecting Reagan from the political fallout of the Iran Contra Affair. Meese resigned as attorney general when he came under investigation from a special prosecutor.

In the modern era, President Clinton’s Attorney General Janet Reno became a lightning rod for controversy and criticism for Republicans in Congress. Reno is best remembered for botched federal raid of the Branch Davidian compound in Waco, Texas in 1993 and the return of Elian Gonzalez to Cuba in 1999.

President George W. Bush appointed John Ashcroft as attorney general, a fierce right-wing partisan who had served as a U.S. Senator from Missouri. Ashcroft and his successor Alberto Gonzalez were instrumental in providing the legal justification for the most extreme anti-terrorism actions of the Bush administration. For Ashcroft, it was the USA PATRIOT ACT. For Gonzalez, it was the so-called “Torture Memos” which the Bush administration relied on for its coerced interrogations and waterboarding of terror suspects.

My point in relaying this abridged history of the recent attorneys generals is to show that the Justice Department was deeply politicized before Holder ever arrived.

It used to be that being an experienced, skilled legal mind was enough for that job. Now, nominees have to be a good politician as well.

Have we forgotten that the attorney general is supposed to be an independent, non-partisan law enforcement officer?

You can bet that the next attorney general – whether he or she is appointed by President Hillary Clinton or President Ted Cruz – will be another lightning rod for all the political hate and division in our country.

History will soon write that Holder’s tenure was a light of hope during a dreadful era of political games at the Department of Justice.