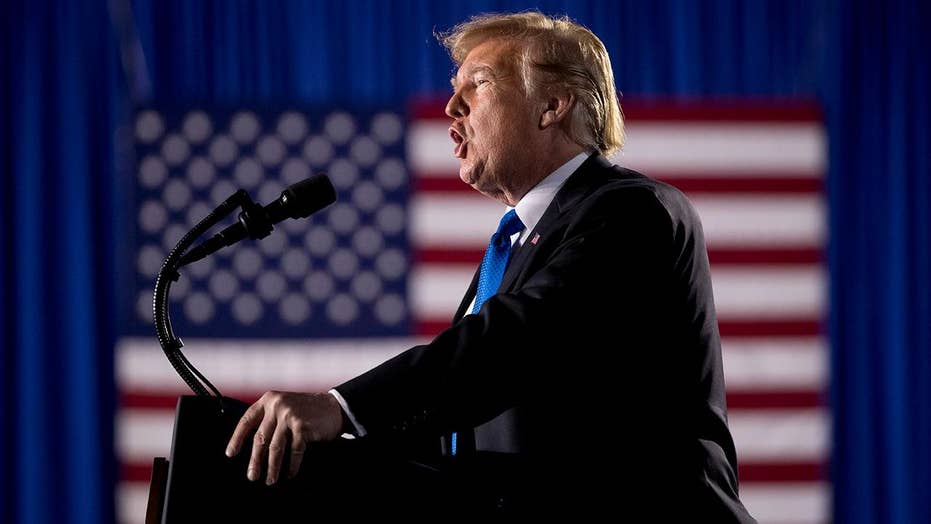 In 1964, 16 years before he was elected president, Ronald Reagan delivered a historic speech called “A Time for Choosing.”

In the speech, Reagan laid out the stark contrast between big government and individual liberty, and between capitalism and socialism. He chided Democrats for claiming “they’re going to solve all the problems of human misery through government and government planning.”

It seems that almost 55 years later, the more things change, the more they stay the same. The election of 2020 will be, once again, a time for choosing.

As campaigning for next year’s Democratic presidential primaries gets underway, it is simply jaw-dropping to contrast the no-nonsense style of President Trump and his hugely successful pro-growth capitalist agenda with the miserably weak field of socialist Democrat White House wannabees.

What a pitiful sight to see a party so mired in political correctness that candidates for the presidential nomination can’t say what they really think because they may offend the aristocracy of coastal elites calling the shots.

Former Rep. and defeated Senate candidate Robert Francis “Beto” O’Rourke, D-Texas, feels the need to apologize for being a white male and for making a lighthearted joke about his wife raising the couple’s kids. This was about as pathetic as it gets.

In one week, O’Rourke’s proven that he’s got no guts and he’s succeeded in making sure everyone knows it.

As a presidential candidate, Sen. Kirsten Gillibrand, D-N.Y., has gained notoriety for her talent of being able to say absolutely anything in order to get votes from unhinged leftists.

Over the summer, Gillibrand called for the abolishment of the Immigration and Customs Enforcement agency (ICE). Most recently, as part of her pander campaign to the open-borders crowd, Gillibrand irresponsibly said that “immigration is not a security issue.”

The junior senator from New York made this juvenile statement despite recent testimony from Homeland Security Secretary Kirstjen Nielsen that illegal immigration just surged 30 percent in one month, “with agents apprehending or encountering nearly 75,000 aliens” in February alone.

It takes a special kind of person to misrepresent the crisis at our border in such dramatic terms. The vast majority of Americans see human trafficking, the opioid crisis, and MS-13 gang violence as an emergency that must be solved.

The incredible shrinking candidate Elizabeth Warren, D-Mass., has been reduced to saying whatever she can to distract voters from her false claims of Native American ancestry to advance her career. Monday night – at yet another low-ratings CNN town hall broadcast – Warren said she wants to abolish the Electoral College as our system for electing the president of the United States.

Unsurprisingly, Warren wants the leftist bastions of California and New York to be able to decide presidential elections because almost no one outside San Francisco and Manhattan thinks socialism can succeed.

Then there’s former Vice President Joe Biden, who appears poised to make his third failed run for president in the past 30 years. Everyone who’s followed politics since 1987 knows that Biden has been a complete non-starter on the national stage when trying to stand on his own.

Biden knows full well that he exists as a national entity only because Barack Obama chose him to be his running mate in 2008. Old Joe is a man in denial, but will likely take the plunge into the race anyway. What else is a Washington swamp creature supposed to do?

Once he enters the race, Biden will undoubtedly be met with questions over allegations of crony capitalism and corruption during his time as Obama’s vice president.

In the unlikely event Biden pulls a surprise and decides not to run, comrade socialist Sen. Bernie Sanders of Vermont would catapult to the top of the sputtering Democratic field.

An average of recent polls shows Biden and Sanders running one-two, taking 30 percent and 22 percent of the primary vote respectively. What does it say about the current state of the Democratic Party that a retread like Joe Biden and the very far-left Bernie Sanders – who called breadlines a “good thing” in the 1980s – are their frontrunners for the nomination?

With a party this adrift, horrible ideas are actually gaining attention among Democrats. These include Sen. Kamala Harris, D-Calif., pledging to get rid of the private health insurance for 175 million Americans and an unknown candidate promising to give every American adult $1,000 a month for doing nothing.

The reality is that the Trump economy is on fire and the Democratic field of candidates can’t explain this reality away. In fact, recent polling shows that 71 percent of the American people believe that the economy is in "good shape."  Even The Washington Post felt compelled to publish an analysis headlined “How Democrats are putting a bad spin on good economic news.”

The bottom line is that Reagan and Trump’s policies prove that capitalism lifts nations up – and the Soviet Union and Venezuela prove that socialism destroys nations.

Only a party that’s completely out of innovative ideas like today’s Democrats would make the decision to embrace socialism.