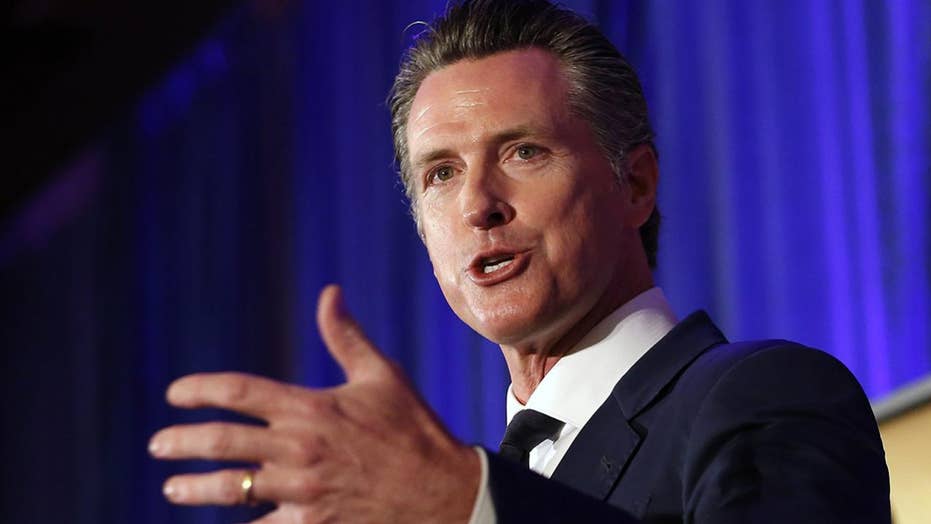 California Governor Gavin Newsom claims the entire Republican Party is headed for “the waste bin of history,” comparing it to the California GOP of the 1990s.

Newsom, of course, is trying to evoke Ronald Reagan’s epic line about Soviet communism from 1982, which was itself an ironic appropriation of a taunt made famous by communist revolutionary Leon Trotsky.

In brandishing Reagan’s jibe – albeit in considerably less poetic form – against the very people who still honor the former president’s legacy, Newsom may have revealed too much. After all, what he’s really gloating about is the destruction of the idyllic, middle class-dominated, Republican-leaning state that elected Reagan four times – twice to the governor’s mansion and twice to the White House.

GAVIN NEWSOM PREDICTS THE GOP WILL DEVOLVE INTO A THIRD PARTY: 'THEY ARE FINISHED'

First came the 1986 amnesty for millions of illegal aliens, the largest share of whom resided in California. It was a regrettable compromise, but it was one which many conservatives considered worthwhile because amnesty was supposed to be coupled with stricter enforcement of America’s immigration laws.

Then came the liberals’ betrayal of that compromise. What started years ago intensified with the election of Donald Trump as president. Instead of the border security we were promised, we got “sanctuary cities,” lawsuits from open-borders groups that crippled our enforcement efforts, and tortured re-interpretations by leftist judges that turned our immigration laws into an international joke – a magnet that draws illegal aliens to our borders in numbers that the architects of the 1986 compromise never imagined.

California was devastated by the consequences of that amnesty. Between the massive influx of mostly poor illegal aliens and a booming tech industry creating a steady stream of overnight millionaires, economic inequality skyrocketed. California is now the fourth-most unequal state in the country, with a large and growing divide between the haves and the have-nots.

Middle-class Californians, meanwhile, were left with taxes they couldn’t pay, housing they couldn’t afford, and failing schools – which had once been a model for the world – that they wouldn’t dream of sending their kids to. And to top it all off, they were asked to bear the enormous financial burden of subsidizing the illegal immigrants whose cheap, plentiful labor is so attractive to the state’s elites.

But it didn’t happen all at once. California Republicans in the 1990s did not go quietly. They fought tooth and nail to preserve the California that beguiled Ronald Reagan and so many others.

They did not, as Newsom claimed, rely on “xenophobia,” “nativism,” “fear of the other,” “scapegoating,” or “hysteria” to make their case. Rather, they relied on the huge majority of Californians who did not consent to their state being transformed into a multicultural oligopoly, and who repeatedly let that be known at the ballot box.

In 1994, seeing the unfolding disaster flowing across our uncontrolled border, I helped craft a landmark campaign to give California the toughest anti-illegal immigration law the country had seen to that point. Californians passed that law, Proposition 187, by a massive 17-point margin in a popular referendum.

That same year, Republican Gov. Pete Wilson, running on a strong anti-illegal immigration platform, won a second term in a 15-point landslide, taking 51 of California’s 58 counties, including all but one outside the San Francisco Bay area. The expression of public will was so strong that even the ultra-liberal U.S. Sen. Diane Feinstein was compelled to adopt a muscular stance in opposition to illegal immigration. When Wilson left office four years later, he remained immensely popular.

Millions of 1990s-era Californians, especially the middle- and working-class citizens who made up the backbone of Pete Wilson’s electoral coalition, packed up and left the state for good after that. Their exodus is still ongoing, not because of xenophobia or nativism, but because California has become unlivable for them.

Millionaires such as Newsom, on the other hand, are staying right where they are. In fact, their rich friends continue to move into the Golden State’s now-prohibitively expensive affluent communities – Newsom’s own bucolic Marin County, for example – where they are eager to be waited on by millions of cheap, illegal immigrant laborers.

The Republican Party in California did not decline because of its support for the enormously-popular Proposition 187, nor did it decline because its rhetoric was too harsh. The real reason that California Republicans became an endangered species is because liberal elitists neutered and then shredded Proposition 187, the state’s only safeguard against the dysfunction it is dealing with today.

Just take arch-liberal MSNBC host Joy Reid’s word for it. “You want to know how California went from a reliably red state to a solidly blue one? Demographics,” she tweeted in 2017. “Republicans in California didn't suddenly become more liberal… The population changed.”

When Gavin Newsom says “America in 2019 is California in the 1990s,” he’s absolutely right. Americans elected Donald Trump president because, just like those 1990s Californians, we don’t want to sacrifice our livelihoods to the whims of rich coastal liberals who wish to turn our country into their own personal playground.

We face all the same obstacles today that we did back then: organized open-borders advocates, activist liberal judges, and sanctimonious politicians such as Gavin Newsom who stigmatize and dismiss our legitimate concerns as “hysteria.”

The difference is, unlike those Californians who fled the state in droves to escape its demise, we don’t have anywhere to run. That’s not “scapegoating” or “xenophobia.” It’s a cold, hard fact.

Democrats are certainly trying to replicate California’s implosion at the national level, but they’re contending with a much more determined opponent today. There will be no new amnesty as long as President Trump is in the White House, and border security will never be relegated to the back burner.

Gavin Newsom thinks Republicans are going to wind up in “the waste bin of history,” but his own failed state of California is already taking up all the space in that particular metaphorical receptacle, and Donald Trump’s presidency is proof that Republicans are committed to never again make the mistakes of the 1990s.

Rep. Dana Rohrabacher represented California's 42nd, 45th, 46th, and 48th Congressional Districts from 1989 to 2019. He served as a campaign press secretary, speechwriter, and special assistant to President Ronald Reagan between 1976 and 1988. In the 1990s, Rohrabacher was one of the founders of the movement that led to Proposition 187's passage.