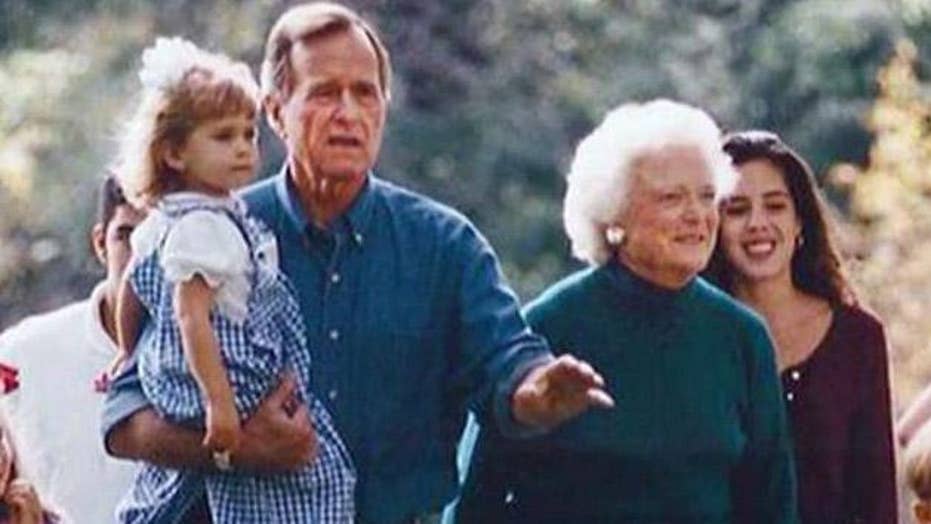 The first time my husband, Peter McMahon, met Barbara Bush, he was hooked. We were invited to have lunch with President George H. W. Bush and the former First Lady in Houston in 2010. It was a special treat, especially for Peter who had become an American citizen in 2006.

After we ate, the president and I sat talking, well, gossiping really, and Peter and Mrs. Bush walked in the garden outside with their two dogs.

As we said our goodbyes, Peter got in the car and said, “I think I have a new crush.”

During the lunch, we’d talked about thank you notes and their importance. Upon returning to Washington, D.C., Peter wrote one but he didn’t have the address. I was traveling for several days, so the letter didn’t get sent for a couple of weeks.

It is a privilege to see their family having fun, no cameras around, making fun of each other and catching up. “We are so very blessed,” Mrs. Bush said. She lived with gratitude, which is one of the lessons she taught that I will try to remember.

The next time we saw her, she said with a smile to Peter, “Well, that was the latest thank you note I ever received.” He was in his fifties, but he reddened with embarrassment. Because Barbara Bush was a woman you didn’t want to disappoint. Of course, she followed that up with a smile and a knowing look. The crush deepened.

As a former staffer for her son’s presidency, Mrs. Bush knew me as someone loyal to him and to her entire family. She seemed to trust me, and that meant the world.

Perhaps that was part of her success as one of America’s beloved First Ladies. Barbara Bush didn’t have to rule with an iron fist - one look of disapproval could melt you. Around her you were on your toes and alert - I learned to come ready with some new bit of information about what was going on in politics and television or with a recommendation on a new book she might like.

In 2011, I invited Mrs. Bush to kick off a Minute Mentoring event in Houston. She said, “Why would you want me? I’ve never worked a day in my life.”

While true that she never earned a paycheck, she worked her tail off for her family, her staff, her country. She donated all of her book proceeds to charity.

In brief remarks before the mentoring session, she said “Earlier today I called George and asked him about working with Dana. And then I called Dana and asked her about working with George. And the advice I can give to you is that listening to the two of them describe working together, that loyalty goes both ways.”

Two summers ago, we visited her and President Bush in Kennebunkport. We were fortunate to be invited for lunch and their children were all there. It is a privilege to see their family having fun, no cameras around, making fun of each other and catching up. Peter helped Mrs. Bush fill her plate and she said, “We are so very blessed.” She lived with gratitude, which is one of the lessons she taught that I will try to remember.

After lunch, we took Jasper to Gooch’s Beach, where dogs are allowed to run off leash after 5 pm. He had a great time, and we were reluctant to leave. As we were packing up the car, a local woman said, “Excuse me, I see you’re not from around here.” She’d noticed our New York license plates.

“Well, I just wanted to point out to you - do you see that woman over there, with the two little dogs, two men walking behind her? That’s First Lady Barbara Bush. We love her. And I just thought you’d like to know that she walks this beach with her dogs every day.”

And now, we are all crushed. Barbara Bush has left us, but everything she gave us remains.  We -- her family, her friends, Americans who loved and admired her -- even those who just knew her from walking her dogs! -- still love her.  As she loved this country.  With Barbara Bush, that too will always go both ways.