Illinois Republican Rep. Adam Kinzinger weighs in on the president's decision to not retaliate against Iran using military force.

Damned if you do. Damned if you don’t. Welcome to the media’s Iran coverage where President Donald Trump is never really right — whether he responds militarily to Iran or opts not to do so.

Iran, a theocratic loony bin that is the world’s No. 1 terror state, shot down a military drone this week that was worth at least $130 million. While it was flying over international waters. What followed was a high-speed, condensed version of media coverage in the Trump era.

If you wanted people to knock Trump, you’ve got them. Matt Fuller‏, who covers “Congress and stuff for HuffPost,” blamed the president, claiming, “Trump almost severely escalated a war with Iran.” Even though Iran had attacked.

Atlantic staff writer David A. Graham whined that “using the military as a prop for melodrama like this is dangerous.” Times columnist Roger Cohen argued, “Trump’s Slouching Toward War With Iran Is a Disgrace.”

Former Time magazine editor turned Obama appointee turned MSNBC political analyst Richard Stengel mocked the president. “In foreign policy, not only is Trump not a chess player, he’s a checkers player who cannot even think a single move ahead.”

Trump’s decision not to strike Iran got him briefly positive comments from both The New York Times and Washington Post editorial pages. The Times called it “welcome news” and said “President Trump was right to buy himself time on Iran.” That before criticizing “the disproportionate human costs of many” administration policies. The Post was similarly restrained, saying “Mr. Trump makes one good call on Iran.” It followed by criticizing his entire Iran policy. 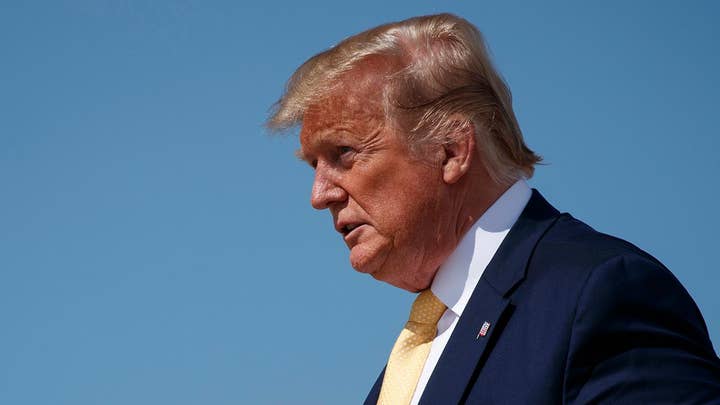 Everything devolved from there. Post columnist Josh Rogin misreported the timeline of events, to point fingers at Trump. “Lot of officials speculating today Trump called off the Iran strike literally while watching Tucker Carlson.” Even Times White House correspondent Maggie Haberman‏ corrected him. “Tucker comes on at 8. Strike was called off before that.”

NBC trotted out memories of President Barack Obama to blame Trump. “Obama, others warned Trump that pulling out of Iran nuke deal could lead to war.” Forget that conservatives had criticized the deal since it was discussed and then never approved by the Senate like an actual treaty.

Even before Iran shot down the drone, former Obama shill Ben Rhodes was blaming Trump. He told “Morning Joe” that the administration was “trying to pin the blame on the Iranians” for oil tanker attacks.

This is the same Ben Rhodes who the Post wrote: “led journalists to believe a misleading timeline of U.S. negotiations with Iran over a nuclear agreement and relied on inexperienced reporters to create an ‘echo chamber’ that helped sway public opinion to seal the deal.”

2. A Horrible Game of Concentration: New York Democrat Rep. Alexandria Ocasio-Cortez sure made news this week — for good or ill — by calling detention facilities at the border “concentration camps.” This, just days after ABC celebrated her as “the most sought-after endorsement in this Democratic primary.”

The fight over her offensive use of language has lasted for days with little sense it will blow over. Instead, many in the left-wing media have actuallyl embraced her use of the term, defended it and generally reminded people that they hate America and have felt that way for decades.

Journalism Prof. Peter Beinart informed us that, “AOC’s Generation Doesn’t Presume America’s Innocence.” Except it’s not her generation, it’s just the liberal wing of it. And that’s no different than in the 1960s. He added the background, that “the left is mounting a serious challenge to American exceptionalism.” In other words, the Hate America Team (HATe for short) is just more public than it’s been in the past.

The result for the left was a pile-on – not against AOC but against America. Journalist Andrea Pitzer wrote in The New York Review of Books describing the controversy as, “‘Some Suburb of Hell’: America’s New Concentration Camp System.” New Yorker Staff Writer Masha Gessen portrayed the debate as, “The Unimaginable Reality of American Concentration Camps.”

News outlets hurried to AOC’s defense. Newsweek‏ claimed that, “Experts agree with @AOC's description of border facilities.” Again, where were these experts when Obama was doing the same thing during his administration?

MSNBC‏ Anchor Chris Hayes villainized those who disagreed, pretending that “so many of those in high dudgeon over the words of Alexandria Ocasio-Cortez have shown absolutely zero concerns about the deaths of these children."

NBC Political Director Chuck Todd slapped back at AOC. He said she, “tried to make a distinction between concentration camps and Nazi death camps.” “But Congresswoman, tens of thousands were also brutalized, tortured, starved, and ultimately died in concentration camps. Camps like Dachau.”

He managed to slip in Trump criticism, but continued his response: “If you want to criticize the shameful treatment of people at our southern border, fine. You’ll have plenty of company. But be careful comparing them to Nazi concentration camps! Because they're not at all comparable in the slightest.”

AOC supporters were unhappy with Todd. When CNN reported that the president would appear on “Meet the Press” this Sunday, CNN reporter Donie O'Sullivan commented, “Maybe he liked Chuck Todd’s concentration camp monologue.”

Vox journalist Carlos Maza bashed Todd in response. “Genuinely one of the most shameful @chucktodd segments I’ve ever seen,” he wrote, complaining about treating “‘neutrality’ as a virtue.”

3. ‘Biden Has Not Changed’: That is from a Times headline. The whole headline goes like this: “Biden Has Not Changed. The Politics, Culture and Mood of His Party Have.” This is a ridiculous rationalization for why the press let Biden get away with having worked with segregationist Democrat senators — because he was on a ticket the media supported.

Just like with Obama, the media didn’t dig into his past, didn’t highlight his controversies. Now that Joe is the least liberal left-winger running, the press and the left want to kneecap him so they can nominate someone more politically like Joe — Stalin not Biden.

Biden is trying to survive a Night of the Long Knives, with every knife pointed at him. Politico Founding Editor John Harris questioned whether the former V.P. is acting more like “Grampa Simpson.” Former ABC News White House correspondent Sam Donaldson called Biden’s comment the “mother of gaffes.”

Both the Post’s free daily The Express and MSNBC mislabeled the two late Democratic senators James Eastland (Miss.) and Herman Talmadge (Ga.) as “Republicans.” MSNBC Anchor Kasie Hunt, who I praised here just a few weeks ago, never missed a beat. “Joe Biden references his relationships with two former Republican colleagues at an event in New York City. The only problem? They were both segregationists,” she explained and later corrected the error.

Now let’s put this in context. Virginia Gov. Ralph Northam admitted to using blackface and his attorney general confessed the same. One might think the media would connect those dots.

Nah. That’s too much of a heavy lift. After all, they’re Democrats.