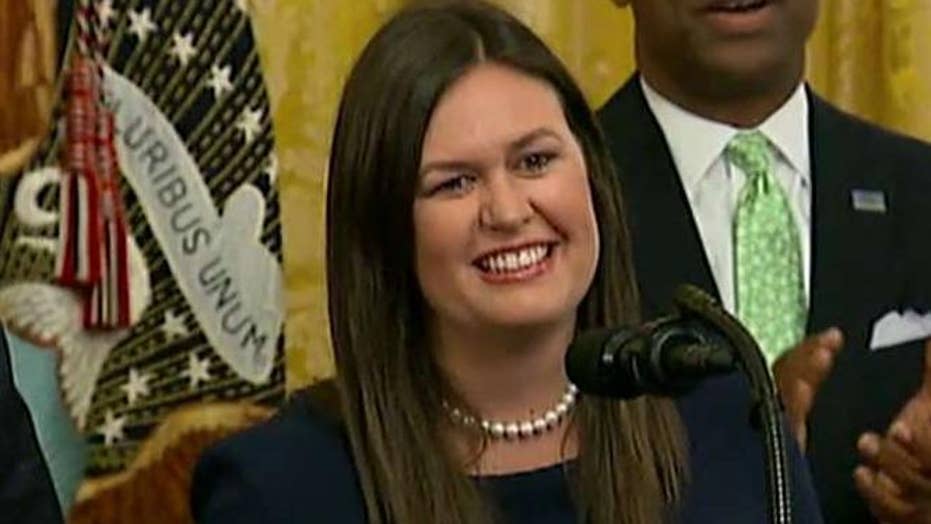 White House Press Secretary Sarah Huckabee Sanders is turning in her microphone and no one is happier than members of the press, who already wanted to silence her.

Sanders did her job, just not the role the liberal press demanded. She served as President Donald Trump’s press secretary, not the ally journalists wanted to help them oust Trump.

Instead of celebrating a woman rising to such an important role, both news and entertainment media mocked her looks, her job performance and, even, her honesty.

ANDREW MCCABE CELEBRATES SARAH SANDERS' EXIT FROM WHITE HOUSE: 'I HAVE TO SAY I WILL NOT MISS HER'

The divide was stark. Conservatives sang her praises as she announced her exit. But liberals in the media slammed her.

Reuters mocked Sanders by calling her “a fierce loyalist,” but only revealed the outlet’s own biases. New York magazine’s Matt Stieb highlighted her “Career of Deflection.” NBC/MSNBC News Analyst Howard Fineman tweeted that, “She lies with pride!” New York Times columnist Nicholas Kristof‏ said she “had an impossible job and handled it poorly.”

A common whine reflected the decline in White House press conferences — in effect, blaming media misbehavior on Sanders and not the press. CNN editor-at-large Chris Cillizza declared, “Sanders fundamentally changed the job of White House press secretary during her 23 months in the role. And not for the better.” And The Washington Post headlined a media criticism column with a quote from left-wing actor Alec Baldwin calling Sanders, “a mouthpiece for fascism.”

The press war against Sanders won’t end soon. Journalist Laura Bassett took the vindictive route. “I don’t know who needs to hear this but you do not need to hire Sarah Sanders as a cable news commentator or politics editor,” she wrote. Far-left advocacy group Public Citizen embraced a similar strategy. “Cable News networks, repeat after me: I will not hire Sarah Sanders.” It repeated the second piece eight times, ala Bart SImpson.

This form of total media war will hardly be new to Sanders. Daily Beast and GQ magazine Culture Writer Ira Madison III began her tenure blasting Sanders’ looks on Twitter, calling her a “Butch queen first time in drags at the ball.” He gave a lame apology but that was the tone for two years in a job where even an obscure restaurant refused to serve her.

Journalists’ hatred for Trump ricocheted onto Sanders throughout her time in the job. Washington Post columnist Jennifer Rubin urged people to give Sanders a "life sentence" of harassment. Rubin bizarrely declared that Sanders "has no right to live a life of no fuss, no muss." Rubin even claimed the press secretary had been “inciting against the press.”

MSNBC host Nicole Wallace banned clips of Sanders on her show. Of course, Wallace also asked White House correspondent Kristen Welker, “how do you resist the temptation to run up and wring her neck?” Another lame apology followed.

Comedienne Michelle Wolf went too far “joking” about Sanders during White House Correspondents’ Dinner. Wolf made fun of how Sanders looked and called her a liar, which ended, at least for now, liberal comics entertaining at the event.

But the biggest issue the press secretary encountered could best be described as The CNN Problem. CNN's Chief White House Correspondent Jim Acosta perfected his non-journalistic confrontations in the press room during Sanders’ tenure. The network liked it so much that it hired mini-Acostas — April Ryan and Brian Karem. The press room goal became making a scene in front of the ever-present news cameras.

Acosta confronted anyone who took the podium — but especially Sanders. He grew upset that Trump called some in the media “enemies of the people” and declared the working press “are not the enemy of the people,” wanting Sanders to agree.

All that led to having Acosta’s credentials pulled and then restored.

The fight was far from over. Only two months ago Ryan called for Sanders to be removed: “She should be fired, end of story.”

Now, Sanders gets to walk away and someone new is thrown into the media meatgrinder.

No matter who is chosen, they will have a hard time doing a better job fending off the anti-Trump press than Sanders did.

Either way, the press will hate her replacement almost immediately.