Late-night comedy is dead. And if you want proof, look no further than Seth Meyers’ interview with conservative Meghan McCain Tuesday night.

NBC’s “Late Night” show was in typical form. Meyers began with four straight jokes about President Donald Trump and then followed with two skits attacking him, including a mock press conference where he asked about the president’s “erectile dysfunction.”

Then came the fireworks as McCain popped the liberal bubble with actual disagreement.

McCain, co-host of ABC’s “The View,” deserves an award as the conservative most willing to fight with Hollywood liberals on their home turf. This time she crossed swords with Meyers who pretended he was just looking for “common ground” while defending anti-Semitic Rep. Ilhan Omar, D-Minn.

The 11-minute appearance started well when the two reminisced about her NBC internship and urged the audience to “vaccinate your kids.” They even bonded over their mutual dislike of Trump – almost mandatory for late-night guests.

But it all went off the rails when Meyers brought up Omar’s anti-Semitic comments. He called criticism of those statements “fairly dangerous” because Omar has received death threats. Meyers pressed her. “Don’t you think other people who talk about her need to be a little more thoughtful as well?” he asked. “Or do you stand by those comments of tying to this, her rhetoric to the synagogue shooting?” 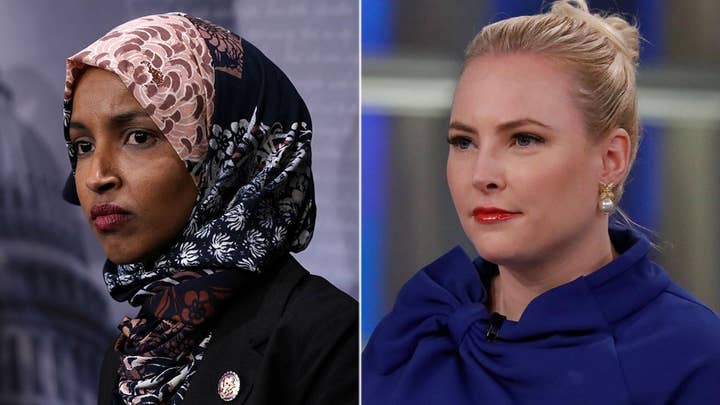 McCain didn’t back down, noting, “I think that I’m calling out what I see as anti-Semitic language and when you’re talking about how hypnotic ...” That’s when she was interrupted by Meyers, who complained she “called it out after she apologized for it.”

McCain then made the telling comment, “I think she is bringing her party to the extreme, extremism on this,” warning about how anti-Semitism is on the rise in Europe. But Meyers didn’t let up his role as Omar’s Baghdad Bob. He even went on to defend her 9/11 comment on how “some people did something.” According to the host, “I thought it was taken out of context.”

When McCain cited exactly what Omar had said, Meyers couldn’t take it. “I just think you can’t talk about Jews hypnotizing the world, talking about ‘all about the Benjamins,’” McCain explained. He called that “a little unfair” since Omar had eventually apologized.

McCain dropped the line of the night, asking if he was Omar’s “publicist.”

Ultimately, McCain refused to back down and declared, “I stand by every single thing I said.”

Meyers has a history of taking the left’s side of almost every debate. He said national health care “makes basic sense to people,” mocked the very real problem of illegal aliens murdering Americans, and said he assumed President Donald Trump’s campaign was a joke “right up to the moment where he won.”

Left-wing Vox said back in 2017, “Seth Meyers has responded to President Trump with clear eyes, a full heart, and unabashed disdain.”

He’s gotten worse and is far from alone. The entire genre has been taken over by anti-Trump attempts at humor and slams of conservatives. It’s no longer the standard three late-night offerings. “The Daily Show,” “Real Time with Bill Maher,” and John Oliver’s “Last Week Tonight” form a second rank of liberal attacks on the right. There’s even “Full Frontal with Samantha Bee” and the host who took a nasty shot at Ivanka Trump.

That’s just three broadcast network shows and one night. It’s this way every night as Hollywood tries to indoctrinate anyone who can stomach these shows into liberal orthodoxy and how to vote in 2020.