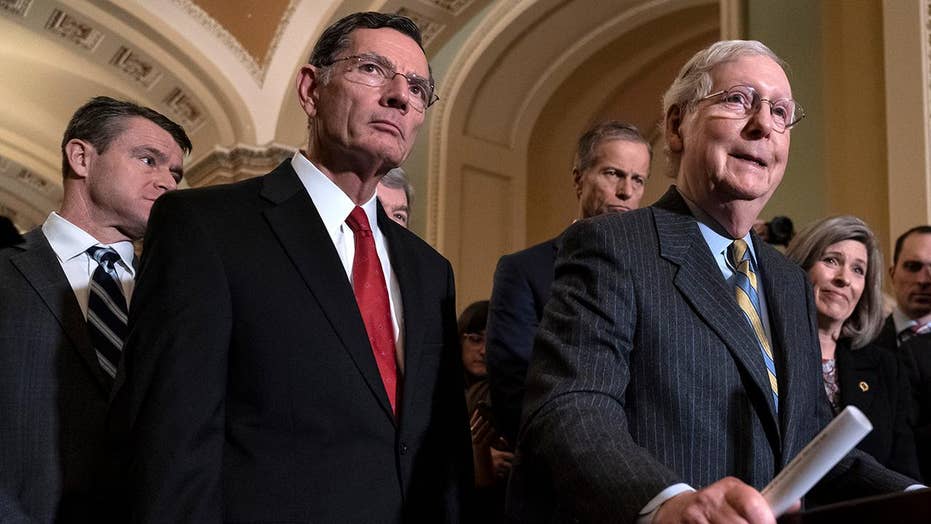 Senate Majority Leader Mitch McConnell, R-Ky., has drawn criticism for supposedly showing “no intention to be impartial” during a prospective impeachment trial of President Trump.

“Will we fulfill our duty to conduct a fair impeachment trial of the president of the United States?” asked Senate Minority Leader Chuck Schumer, D-N.Y. “The answer is no.”

But Schumer should know that this process has lacked fairness from the start.

The cornerstone of the American criminal justice system is “innocent until proven guilty.” It’s the difference between being prosecuted and being persecuted.

I fear the process that has been followed to impeach President Trump is yet another sign that our collective sense of justice is fragile.

To be clear: I’m not here to defend Trump.

Although I have worked with President Trump and support most of his policies, he has plenty of lawyers and aides and pundits readily able to defend his words and actions. For that matter, he’s no shrinking violet when it comes to defending himself against relentless attacks.

But something far more fundamental to the welfare of our nation is at stake. I’m here to defend fairness.

Fundamental basic fairness is at the very core of who we are, or at least who we are supposed to be, as a nation.

While we Americans have certainly fallen short of our ideals throughout our history, we have generally coalesced around constitutional rights such as the right to face your accuser; the right to know the charges and the evidence against you; the right to trial by jury; and the right to be presumed innocent until proven guilty.

In court, we call this due process. To the average everyday American, it’s just plain fairness.

As a criminal prosecutor for most of my career, I have known the search for truth to be grounded in the legal axiom of “innocent until proven guilty.” We may investigate a suspect of a crime and gather evidence of guilt to be presented at trial, but we do so in a manner that safeguards the presumption of innocence. Without that presumption, we lose fairness.

The overtly partisan nature of the impeachment process thus far would suggest that fairness has not been a priority. From the moment the Democrats took control of the House of Representatives, impeachment of the president has been a constant drumbeat — even without any clarity over what specific crime might have been committed.

There is no doubt that Congress has the constitutional authority to impeach the president. But it requires an articulable crime — “Treason, Bribery, or other high Crimes and Misdemeanors,” to quote the Constitution.

When the long-anticipated Mueller report fizzled into nothing that contained evidence of a crime, however, Democrats kept the impeachment engine running while looking for another vehicle to drive their desired outcome.

Some might consider unwise the statements made by President Trump to Ukraine’s president about investigations, former Vice President Joe Biden and his son, and military aid. Others say the statements represent typical behind-the-scenes banter among world leaders. In any case, they hardly qualify as high crimes or misdemeanors.

Congress ultimately reduced their investigation of the president to two articles of impeachment — 1) “abuse of power” and 2) “obstruction of Congress.”

Neither of these vague “charges” is a crime. While abuse of power is a serious allegation that can be considered at the ballot box, it is not defined as an actual crime. If Congress charged the president with treason or bribery, then those are specific allegations for which he could prepare a defense.

Now some will say: “But this is not a criminal proceeding. The president is not entitled to due process as if he were in a court of law.”

Where did I hear that before? Oh yes, the Senate hearings to confirm Brett Kavanaugh to the U.S. Supreme Court. There, we heard liberal senators and law professors alike claim that Kavanaugh was not entitled to due process because the Senate hearings were not a criminal trial. Suddenly, new standards of fair play were being applied.

No longer was Kavanaugh innocent until proven guilty. Rather, an accusation by someone deemed (by somebody) a credible witness was “enough” — whatever “enough” meant. In the case of Kavanaugh and his detractors, it meant enough to derail his nomination — or so they hoped.

In those hearings, we saw the same slippery slope that we see today. The process for considering accusations against public officials has turned into a political contest.

Those who liked Kavanaugh’s judicial philosophy argued he deserved fairness and due process in the face of allegations. Those who didn’t like his ideological bent considered the accusations to be “enough,” and to hell with being fair. These individuals would argue the ends justify the means, but I believe that how we do things still matters in America.

I support the president because of the results he has delivered. He has unleashed a booming U.S. economy. He has appointed nearly 200 federal judges who respect the Constitution. He has implemented a foreign policy that puts American interests first. I realize he is also a colorful character with a distinct way of communicating. If others want to question his style and/or substance, then let’s have that debate before we go to the polls in November.

But let’s also repudiate the unwise rush to impeachment that has damaged our political discourse.

The principle of fairness is that the law applies equally to everyone, no matter who they are or what they are accused of doing. Love him or hate him, President Trump has the same right to fairness as anyone else.