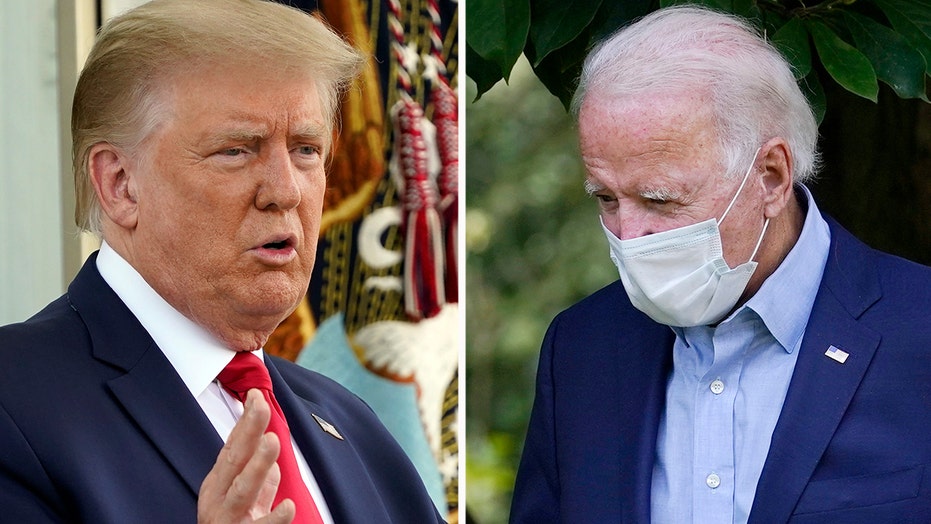 Trump, Biden clash on blame for economy amid coronavirus pandemic

In politics as in sports, the best defense is a good offense.

Say what you will about President Trump’s tone, tactics or tweeting, but even his most strident critics admit he’s at his best when on the offensive. Over the past several weeks, the president has delivered a masterclass in executing relentless political offense.

Trump has flushed Democratic presidential nominee Joe Biden from his basement and has succeeded in forcing some very cringe-worthy backpedaling by the former vice president (see banning fracking and defunding the police as just two examples).

But there is still one central issue of the campaign that remains firmly in the Democrats’ favor in nearly every major poll, and that’s regarding the president’s handling of the Chinese coronavirus. The RealClear Politics polling average has Trump upside down by 15 points on this key issue.

This is where the president must once again flip conventional political wisdom on its head. Rather than accept the premise by Biden and the mainstream news media that Trump’s coronavirus response was inadequate, or avoid the topic altogether, the president must engage this debate with an offensive posture.

The opening for the president came during an Aug. 21 interview that Biden gave to David Muir of ABC News. When asked if he would be willing to completely shut the country down again to fight the spread of the coronavirus, Biden said unequivocally: “I would shut it down. I would listen to the scientists.”

Consider for a moment just how horrific it is that Joe Biden would say something like that in late August. Remember, the American people were originally told it would take 15 days to slow the spread of COVID-19, but six months later you still can’t go to church in California.

From the debate stage (assuming presidential candidate debates actually take place) to campaign ads across the country, President Trump should play that tape back on repeat, banging the drum that Biden would lock America down again.

Not only are coronavirus cases dropping in many places around the country as restrictions ease — it turns out that the original lockdowns simply didn’t work.

Statistical analysis done by TrendMacro used cellphone data from Google to track peoples’ movements and cross-referenced that data against the cumulative number of reported coronavirus cases in each state.

Forgetting for a moment how creepy that is, their conclusion was not that lockdowns made the spread worse necessarily, but that “locking down the economy didn’t contain the disease’s spread and reopening it didn’t unleash a second wave of infections.”

Not only did lockdowns not work; the cure may have been worse than the disease for Americans’ health.

The Health and Human Services’ Substance Abuse and Mental Health Administration predicted early on that over 150,000 Americans would die from a combination of increased suicides, substance abuse, domestic violence and child abuse and neglect.

Anecdotal evidence including massive spikes in coronavirus suicide prevention hotline call volume, coupled with much longer lockdowns than originally expected, have likely made matters much worse.

All of this doesn’t even begin to touch on the devastating effect lockdowns have had on the economy, our skyrocketing national debt, and the more than 100,000 small businesses that will never open their doors again.

As the intense public outcry over Pelosi’s visit to a San Francisco hair salon that should have been closed under coronavirus restrictions seems to indicate, the American people have had it with a tyrannical government robbing them of freedom.

What the Democrats still don’t understand is that lockdowns aren’t actually about the virus at all. Six months later, lockdowns are about livelihoods and liberty.

While Democrats believe the coronavirus is President Trump’s biggest vulnerability, Pelosi’s “blowout-gate” at a struggling hair salon gives credence to this sobering possibility for Democrats: the issue might just be their vulnerability.

If the president advances aggressively on this issue, Biden will be forced to respond in one of two ways:

One response might be for Biden to ease up on mask mandates, national lockdowns, remote learning and mail-in voting. But if he does this, he will look weak and indecisive. Perhaps most importantly it will push Democratic-controlled states, cities and counties to fully reopen and concede to in-person voting. Any return to normalcy (and in-person voting) can only help the president’s reelection hopes.

Alternatively, Biden could double-down on his calls for getting tough against the coronavirus.  If he does this, he will be run straight into a policy position the American people are increasingly impatient with. This will underscore the liberty versus lockdown contrast that the president should draw. This would allow Trump to show he is the candidate who is pro-economic growth — an issue the American people overwhelmingly trust him with.

Either direction he turns, Biden would be politically cornered by the president’s lockdown offensive. President Trump should call him “Lockdown Joe” loudly and often over the next two months and force the Biden campaign to address its terrifying willingness to lock us down again.

Stay on offense, Mr. President. As you do, even more Americans will rally behind you when it comes time to vote in the November election.