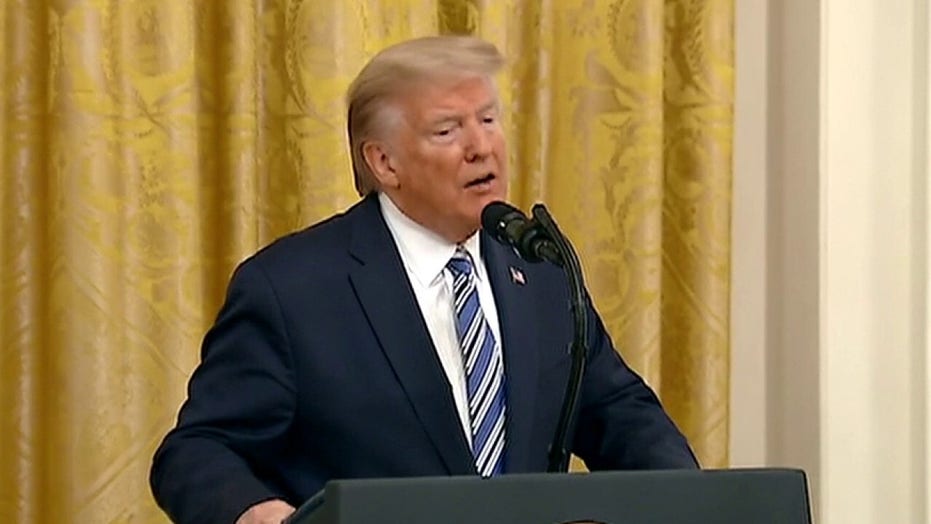 John Roberts reports from the White House after the president orders meat plants to remain open.

The federal government has adopted an integrated and comprehensive approach to addressing the unanticipated COVID-19 pandemic. Early on, President Trump tapped several emergency powers, expanding the authority of the federal government to respond rapidly and effectively.

For example, the Stafford Act provided an immediate source of funding and other resources to equip state and local governments to respond to the surge of infections. Similarly, the National Emergencies Act (NEA) empowered the secretary of Health and Human Services to relax restrictions and licensing requirements that held back telemedicine and innovative public-private partnerships that could help produce a cure.

Moreover, authorization of the Defense Production Act equipped the administration with a hammer to credibly encourage companies to work collaboratively for the benefit of the country. The president invoked the act this week to order meat-processing plants to remain open.

As the severity of the pandemic begins to weaken, the Trump administration will need to think critically about how to phase out some of these emergency powers and begin reopening America. A recently released policy brief through the Mercatus Center provides some clues.

The emergency powers were designed to expand federal authorities to quickly and effectively manage an emerging crisis, but no one intended them to last forever. Unfortunately, that’s exactly what has happened since the passage of the NEA in 1976. In fact, 35 of the 64 national emergencies declared since 1976 are still in effect today. This creates a precedent for the unnecessary expansion of federal powers and increasing irrelevance of Congress and its ability to hold in place checks and balances.

Emergency powers still serve an important role, but if we are serious about revitalizing the American economy and putting people back to work, we need to begin damping down these powers.

Recognizing that an emergency cannot continue forever, President Trump encouraged states to take more responsibility over planning their reopening in a way that recognizes both the costs and benefits of continued containment. In particular, the Trump administration wants to see states and local governments taking more ownership and they have begun transferring power back to the states by providing them with discretion about when and how to reopen their states for business.

Emergency powers still serve an important role, but if we are serious about revitalizing the American economy and putting people back to work, we need to begin damping down these powers.

This discretion is exactly as the Founders intended: since each state is different, governors should incorporate local information and preferences to make the decision that is optimal for them. The federal government only steps in if a state is undertaking actions that jeopardize themselves and the country at large.

Ironically, some pundits have critiqued the president for not taking more of a uniform, federal stance. And yet, they called him a dictator after his announcement of the travel ban against China on Jan. 31 and have continued critiquing him this past week for sounding authoritarian when stating that the president has the ultimate say in times of crisis.

Given the ongoing flip-flopping, these critiques seem more political than substantive. For example, Michigan Gov. Gretchen Whitmer has stopped elective surgeries (e.g., knee replacements), but she continues allowing abortions on grounds they are “life-sustaining.” (Not quite: abortions are actually “life-altering”—for the baby.)

Democrats will need to weigh the costs associated with a prolonged extension of emergency powers with the increased autonomy that comes with transferring power back to the states. It’s hard to have it both ways, especially in an election season — Americans will see through it.

Bradley A. Blakeman was a deputy assistant to President George W. Bush from 2001 to 2004. A principal of the 1600 Group, a strategic communications firm, he is an adjunct professor of public policy and international affairs at Georgetown University and a frequent guest on Fox News and Fox Business.