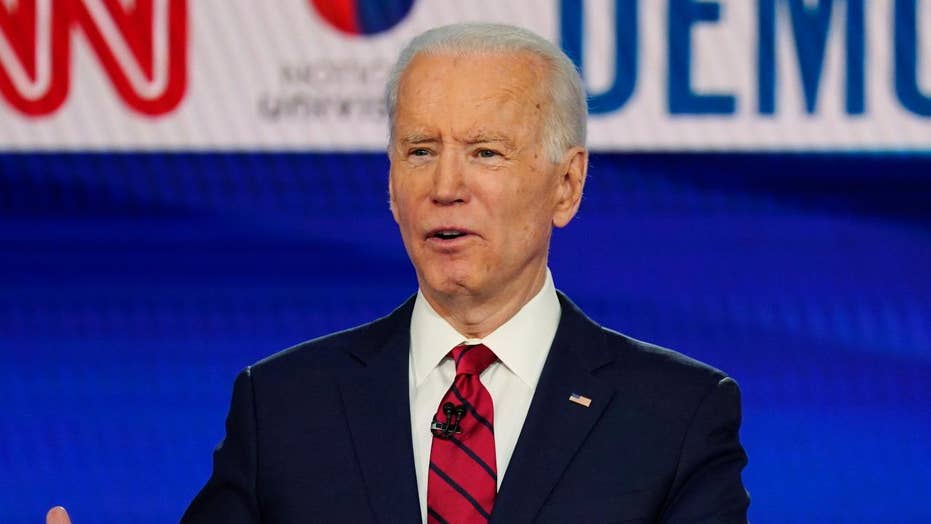 2020 in 60: More wins for Joe Biden in votes held amid coronavirus pandemic

Poor Joe Biden. Forget about love; the poor guy isn’t even getting much attention. It’s tough to score headlines when you are self-quarantining at home in Delaware, even if you are the presumptive Democratic candidate for president.

Though many might consider this a blessing in disguise for the oft-addled candidate, apparently Biden and his team are unhappy.

It’s difficult to make inroads against President Trump when he commands the nation’s attention on a daily basis, communicating the White House’s efforts to combat COVID-19.

REBECCA GRANT: CORONAVIRUS LESSONS FROM 1918 SPANISH FLU – HERE'S WHAT WORKED TO SAVE LIVES

But now, we hear, Biden has a plan;  Politico reports that Obama’s former wingman will offer a “shadow” coronavirus briefing each day, to let the world know “how he would handle the crisis” and to call out what he deems are the “lies and failures” of the president.

Heads-up to Joe: this is not a good idea.

Each day, the White House briefing details the distribution of medical supplies, new therapies being tested and vaccines under development, how the states are managing, the numerous ways our businesses are contributing  to the fight and what the president and his team are doing to get the nation through this crisis.

In contrast, what will Biden have to offer?

We can get a glimpse by reviewing the comments he has already made about the coronavirus, starting with his March 15 debate with Bernie Sanders.

Asked how he would manage the epidemic, Biden proclaimed that, first, “we have to do testing.”  To get test kits, Biden said he would go to the World Health Organization which, he claimed  “offered the testing kits that they have available” but “we refused them.”

That is simply false. According to FactCheck.Org, the U.S. was not offered test materials from the WHO because their kits  are “primarily intended for lower-income nations without testing capacity.”

I encourage everyone to imagine the uproar which would have followed should the U.S. have demanded the WHO turn over scarce tests to our prosperous nation, stranding Ghana or Tunisia or some other nation that has actually received those materials from WHO. That was not going to happen.

Next up: Biden recommends more hospital beds and drive-through test sites. Check and check: Trump announced two days before the debate that his administration would arrange for drive-through testing, in partnership with large retailers like Walmart and Target, which would donate portions of their vast parking lots to facilitate the operations.

In addition, the president has directed Navy hospital ships to help cities in crisis and ordered the military to set up hospital tents where needed.

In the debate, Joe Biden then proposed efforts that would mitigate the economic impact of the virus, including loans to small business owners and “making sure that people who in fact lose their job, don’t get a paycheck, can’t pay their mortgage, are able to pay it, and pay them now, and do it now.”

Clearly at risk of losing an already fragile thread, the former V.P. shut himself down, concluding without evidence, “I see my time is up here. You’re going to hold us tightly, I assume, but that’s what I would do.” It is not the first time Biden has thrown himself on the mercy of the debate moderators.

After the pandemic abates, Biden vows on his website to prepare for the next health emergency, by creating a “permanent, professional, sufficiently resourced public health and first responder system…”

One wonders why the Obama-Biden administration failed to do that, especially since the H1N1 aka swine flu outbreak (and Ebola) occurred under their watch, revealing many deficiencies.

Biden frequently boasts that his management of the swine flu epidemic should convince voters that he is better equipped than Trump to combat the coronavirus. That disease, which broke out in 2009, infected 60.8 million Americans, hospitalized 274,000 and killed 12,469, according to the CDC.

What did the Obama-Biden administration do? According to Biden, they frequently gathered in the Situation Room, occasions he references the way an old-timer reminisces about the country club bar.

In fact, Biden had little to do with the response to the swine flu outbreak; rather, the CDC managed the epidemic. Reviewing comments about the swine flu issued from the White House at various press briefings and statements in 2009, numerous officials are mentioned; Vice President Biden is not.

Even as WHO declared a global pandemic, and even as hundreds of Americans began to die, it took the CDC two months to hold its first public press conference on the disease. Ten days later it was estimated that one million Americans had been stricken.

The Obama government never closed borders or insisted on social distancing. Not until August did the government take stock of needed medical supplies; not until October did Obama declare a national emergency. The contagion quickly spread; months later ongoing schools and summer camps become the epicenters of new outbreaks. Even though tens of millions were sickened, the swine flu was not even mentioned in Obama’s 2010 State of the Union Address, which focused heavily on ObamaCare.

Happily for the Obama administration, and the country, the swine flu was closely related to other known viruses; consequently, a vaccine became available before the death toll could climb even higher. Fortunately, too, for Obama and Biden, the outbreak occurred during the public’s honeymoon with the newly-elected president.

President Trump never enjoyed that traditional honeymoon but instead has had to continually battle not only his political opponents but the liberal media every step of the way.

Now he is fighting a challenge of nearly unprecedented dimensions. Mistakes have been made, but there is no denying that Trump has thrown the total resources of his administration and the private sector into the contest.

Voters will decide who they want to manage this new challenge. If the past is any guide, Biden’s new “shadow” communications will not prove his case.