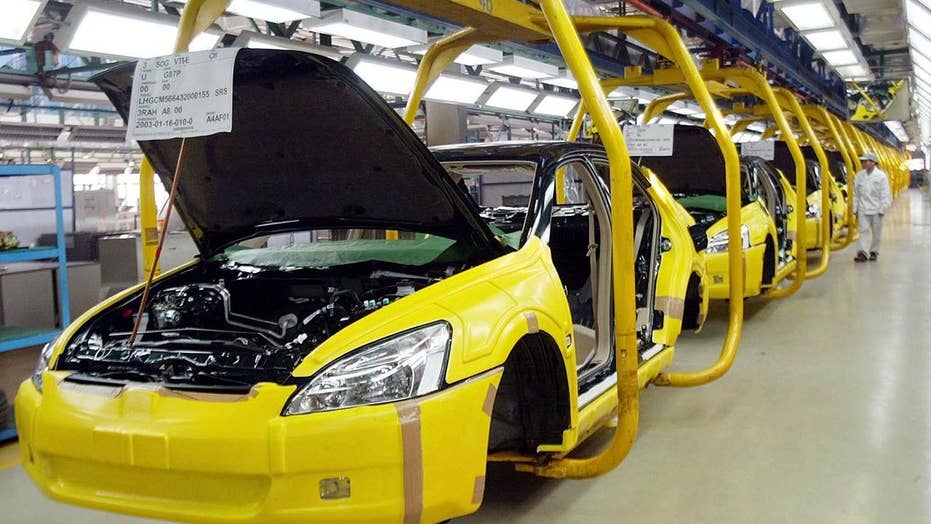 The Trump administration is considering slapping tariffs on imported cars as part of ongoing negotiations with Canada and Mexico over revisions to NAFTA; Kevin Corke reports from the White House.

Recently when I stood alongside President Trump in Michigan and declared “this is Trump country” in front of 15,000 people, I witnessed first-hand our president interacting with thousands of American workers. I truly believe that no one cares more about standing up and fighting for American workers than our president.

In recent months, President Trump took courageous action with the Section 232 relief to save tens of thousands of American jobs by imposing tariffs on foreign aluminum and steel imports. Prior to President Trump issuing the Section 232 relief, global overcapacity of aluminum directly threated U.S. national security, negatively impacted American workers and caused aluminum smelters across America’s heartland to shut down. This led to thousands of American workers losing jobs, decimating communities across the United States.

Despite President Trump’s strong decisive leadership, America’s allies and economic foes are now jockeying for exemptions from these tariffs – threatening to undermine their effectiveness. President Trump is expected to make a decision on exemptions on June 1, and I am confident that he will negotiate a winning solution that is in the best interests of American workers.

Russia, the European Union, the Middle East, and Australia work hand in hand with Chinese aluminum producers in the global marketplace. The Chinese will find any way to cheat the system and avoid tariffs, by moving Chinese product through countries aligned with the United States or making strategic acquisitions of facilities in countries that are not subject to the same scrutiny.

The Chinese will find any way to cheat the system and avoid tariffs, by moving Chinese product through countries aligned with the United States or making strategic acquisitions of facilities in countries that are not subject to the same scrutiny.

For instance, Australian producers, some of whom are partially owned by the Chinese, do not need an exemption to survive or thrive. It’s interesting – like other countries, Australia consumes almost none of the aluminum it produces.  If completely exempted, all of Australia’s aluminum exports will be targeted at the United States. Even now, as Australia attempts to position itself for a permanent exemption from President Trump’s 232 tariffs, imports of primary aluminum from Australia skyrocketed by 95 percent in recent months after already increasing by over 1000 percent the year before. If this situation continues without either applying the Section 232 tariffs to Australia or placing a quota on their shipment volumes, the Australian industry will completely replace the U.S. industry. The Trump administration will not allow American workers to lose out, while the European Union, the Middle East, Australia or others game the system.

President Trump will always put “America First,” at home and abroad and I applaud him for his visionary leadership on U.S. trade policy. As the Trump administration works to make tariffs effective and decrease the likelihood of countries cheating the system there are two options: 1) broad implementation (i.e. no special treatment); or 2) exemptions with quotas. While not ideal, quotas at least ensure that countries can’t increase their exports from previous levels by becoming a backdoor entry point for other countries. If any country is permanently exempted from the 232 tariff, whether it be Canada, Mexico or others, a quota needs to be put in place to ensure that the benefits of the relief flow to the United States, not foreign steel or aluminum industries.

Under President Trump’s leadership, things are finally looking up for hard-working Americans. Smelters are restarting in Western Kentucky, Missouri and across the country with thousands of new American jobs being created. President Trump is keeping his commitment to American workers that he so clearly spelled out on the campaign trail.

The fearmongering from the fake news media and free-market zealots misses the mark on why President Trump is fighting for these tariffs. The claims of massive job loss and economic hardship from the tariffs are unsupported and frankly ridiculous.

The “America First” agenda championed by President Trump will ensure that the domestic aluminum industry can compete on the global stage and fight back against illegal trade practices and countries that cheat. Too much is at stake for America to not take a stand.

While the European Union, the Middle East, and Australia vigorously seek to represent their own national interests, we too should represent ours. Come June 1, I am confident that President Trump will negotiate from a position of strength and put “America First” as we work together to Make America Great Again.