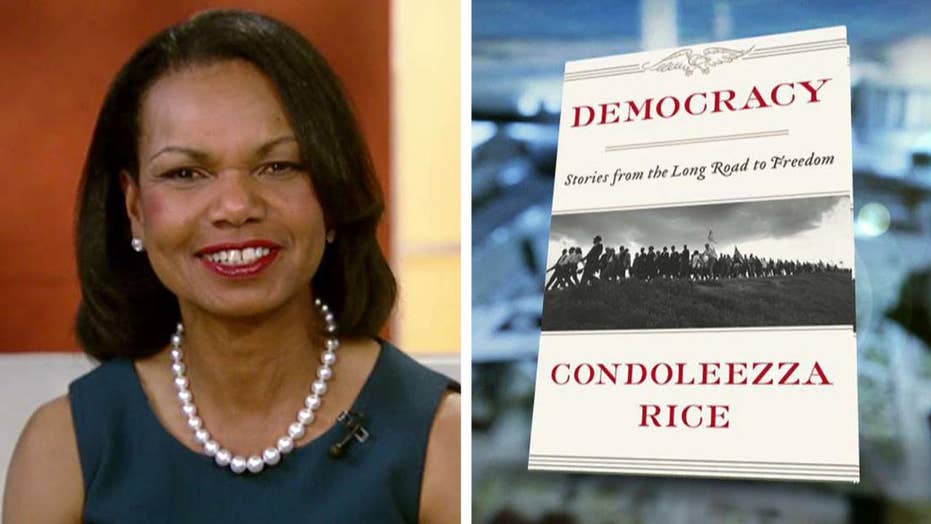 Former secretary of state speaks out on 'Fox & Friends'

Editor's note: The following column is an excerpt from former Secretary of State Condoleezza Rice's latest book, "DEMOCRACY: Stories from the Long Road to Freedom" (Twelve, May 9, 2017).

Democratic institutions are the best hope for humankind— including for the Middle East. Stability born of tyranny is a false stability. It is an unequal bargain in which someone oppresses someone else. When people have no way to change their rulers peacefully, revolution may be the only available course. Reform is better, and everything that we can do to encourage and insist upon change is worth doing.

There is both a moral and a practical case for democracy promotion. In the long arc of history, we know that democracies don’t fight each other. The “democratic peace” is observable. No one today is sorry that the United States helped to build a democratic Germany and Japan after World War II. Both had been aggressors against their neighbors and there was no guarantee that they would not be again. Neither country had sustained experience with democracy, and it required time for institutions to take root. But we stood alongside them, and now they help to form the foundation for international peace and prosperity.

No one today doubts that the spread of democracy through most of Latin America, Africa, and Asia and the emergence of free countries in Eastern Europe have been good for the world. In 2016, Freedom House ranked 145 out of 195 countries as “free” or “partly free.” That is a reason for celebration even if there have been setbacks and reversals along the way.

It is good news that so many countries respect their people and give them a voice in their affairs. The even better news is that they are largely peaceful— Japan doesn’t attack its neighbors, preferring to engage in international organizations. Tokyo is one of the world’s largest foreign aid donors today. Brazil does not harbor terrorists; Ghana does not employ child soldiers; South Korea does not engage in state‑ sponsored human trafficking. These democratic states and others believe in and support an international system based on the rule of law.

The United States has a real interest, then, in seeing their numbers grow. Democracy promotion has been successful and is cost‑effective. If you ask the general public how much money we spend on foreign assistance, you will get wildly inflated estimates. A recent poll found that the average respondent thought it was about 26 percent of the federal budget. In fact, it is less than 1 percent (or a total of about $35 billion per year). Of that, roughly half goes to improving governance and supporting those fighting for liberty.

Our efforts are buttressed by effective and efficient organizations like the National Endowment for Democracy, created in 1983 by President Ronald Reagan. The NED consists of four centers that provide bipartisan expertise to democracy advocates around the world. The American Center for International Labor Solidarity engages with workers’ movements, such as those that played a pivotal role in Poland and Tunisia. The Center for International Private Enterprise works with business communities, which often serve as a counterbalance to governments in autocratic and even democratizing countries. The National Democratic Institute and the International Republican Institute represent our two major political parties in working with citizens around the world to provide training on how to organize parties and run campaigns. And we have a host of additional non‑governmental organizations that pitch in to monitor elections and educate human rights advocates, parliamentarians, journalists, and others who defend freedom in their countries. These efforts help to sustain advocates for religious and political freedom in countries still ruled by tyrants.

If democracy is in recession across the world, we need to make every effort to reinvigorate it. I suspect, though, that the dire warnings about its prospects stem in part from dashed expectations that democracy’s march would be linear— a straight line toward progress. Instead, there have been ups and downs.

Still, the overall trajectory is worth celebrating. Just a few decades ago, Eastern Europe was trapped behind the Iron Curtain, and freedom seemed a distant prospect. A dominant form of government in Latin America was the military junta. There were few multiparty systems in sub‑Saharan Africa. And virtually no one— not scholars nor the leaders and people of the region— talked about democracy in the Middle East.

So while Russia, Turkey, and Egypt discourage us, Chile, Liberia, and Tunisia should inspire us. And we can acknowledge that for every jailed dissident in China or Iran, there is someone else willing to speak out, no matter the cost.

Giving voice to the voiceless is a moral cause for a country—America—that is based on an idea: that human freedom is the source of human dignity and progress. That cannot be true for us and not for them.

Excerpted from the book "DEMOCRACY: Stories from the Long Road to Freedom." Copyright (c) 2017 by Condoleezza Rice. Reprinted by permission of Twelve/Hachette Book Group, New York, NY. All rights reserved.

Condoleezza Rice is the Denning Professor in Global Business and the Economy at the Stanford Graduate School of Business, the Thomas and Barbara Stephenson Senior Fellow on Public Policy at the Hoover Institution, and a professor of political science at Stanford University. Rice was the second woman and first African American woman to serve as U.S. Secretary of State and the first woman to serve as national security adviser.