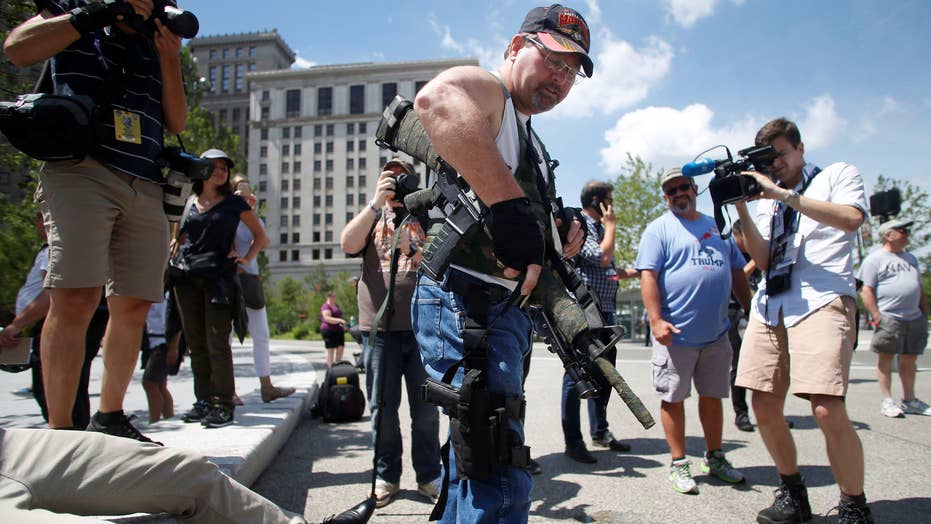 Cleveland bans tennis balls at RNC, but not firearms

The Dispatch: Todd Starnes reacts to the city of Cleveland's rule to ban water guns and tennis balls, but not firearms at the Republican National Convention

Security here in Cleveland has become an even bigger deal in the aftermath of the police shootings in Baton Rouge, Louisiana.

Police officers now tasked with not only keeping delegates safe -- but also each other. And they are especially concerned about protesters who might be carrying firearms outside the security perimeter.

But the governor’s office said declined their request – pointing out they don’t have the right to ban legal gun owners from packing heat in public.

"Law enforcement is a noble, essential calling and we all grieve that we've again seen attacks on officers. Ohio governors do not have the power to arbitrarily suspend federal and state constitutional rights or state laws as suggested,” Kasich spokeswoman Emmalee Kalmbach said. “The bonds between our communities and police must be reset and rebuilt -- as we're doing in Ohio -- so our communities and officers can both be safe. Everyone has an important role to play in that renewal."

While guns are allowed, city leaders have banned dozens and dozens of other weapons and gadgets – from selfie sticks to athletic equipment and cans.

So you can carry an AR-15 outside the security perimeter - but you cannot carry tennis balls or cans of pork and beans.

This morning there was a severe thunderstorm in Cleveland – but lots of folks got drenched – because it’s against the rules to carry an umbrella.

City Hall says they have every right to implement the ban because pork and beans and umbrellas are not covered under the open carry law.

Heaven help the person who brings a tennis ball to a gun fight in a rainstorm with an umbrella.