Chris Rufo on the left's push for radical gender theory

I have obtained insider documents that reveal this troubling collaboration between gender activists at Lurie Children’s Hospital of Chicago and school administrators throughout the Chicago area. According to these documents, and a review of school district websites, Lurie Children’s Hospital has provided materials to school leaders promoting radical gender theory, trans activism, and sexually explicit materials in at least four Chicago-area public school systems: District 75, District 120, District 181, and District 204. According to a whistleblower, these documents were circulated to administrators, teachers, and other staff at the middle school and high school level as part of ongoing employee-training programs.

The primary training document, "Beyond Binary: Gender in Schools," follows the basic narrative of academic queer theory: white, Western society has created an oppressive gender binary, falsely dividing the world into the categories of man and woman, that has resulted in "transphobia," "cissexism," and "systemic discrimination" against racial and sexual minorities.

Versions of the document were attributed to Jennifer Leininger, associate director of Lurie’s Community Programs and Initiatives, and Hadeis Safi, a "nonbinary" genderactivist who uses "they/them" pronouns and works for the hospital’s LGBTQ and Gender Inclusion program—which advertises its care for children with "gender expansive" identities and offers "gender-affirming" medical procedures, including puberty blockers for children.

The presentation encourages teachers and school administrators to support "gender diversity" in their districts, automatically "affirm" students who announce sexual transitions, and "communicate a non-binary understanding of gender" to children in the classrooms. The objective, as one version of the presentation suggests, is to disrupt the "entrenched [gender] norms in western society" and facilitate the transition to a more "gender creative" world.

In at least two districts, the activists at Lurie Children’s Hospital also recommended that teachers offer a series of sexually explicit resources to children as young as 11. 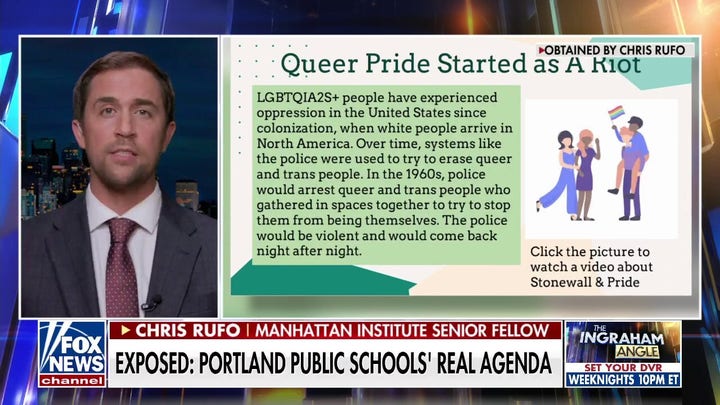 RADICAL GENDER THEORY HAS NOW MADE ITS WAY INTO MORE THAN 4,000 US SCHOOLS

In addition to these materials on gender theory, Lurie Children’s Hospital has also publicly released a policy guide for school administrators, encouraging districts to adopt a "gender-affirming approach" to the curriculum; provide "gender-affirming children’s books" in school libraries; and allow students to compete in athletic events, use restroom and locker rooms, and sleep in bunks during overnight school trips in accordance with their "gender identity," rather than their biological sex.

These documents reveal a profoundly disturbing collusion between radical gender activists in the medical system and the public school bureaucracy.

The hospital also encourages school districts to designate special "Gender Support Coordinators" to help facilitate children’s sexual and gender transitions, which, under the recommended "confidentiality" policy, can be kept secret from parents and families. "District staff shall not disclose a student’s transgender identity," the policy reads.

"Before contacting the parent(s)/guardian(s) of a student who is transgender or gender nonconforming, District staff should ask the student what name and pronouns they would like school officials to use in communications with their parents."

Beyond the lurid nature of some of the content, these documents reveal a profoundly disturbing collusion between radical gender activists in the medical system and the public school bureaucracy. They have laundered the promotion of queer theory, synthetic sexual identities, and child sex toys under the guise of "health and education," devoting significant resources toward building what policy analyst Leor Sapir has called a school-to-clinic pipeline.

The process is simple: children learn about and adopt "gender expansive" identities in schools, which then direct them to gender clinics that can provide puberty blockers, hormone therapies, surgeries, and drug regimens that often add up to hundreds of thousands of dollars in costs over time.

The cynical interpretation of this pipeline would suggest that it is driven by the profit motive. But another current is ideological: radical gender activists believe that they are in a struggle for liberation from the system of "cisheteropatriarchy"—and each "gender non-conforming" child is another tool in that fight.

Christopher F. Rufo is a senior fellow at the Manhattan Institute and a contributing editor of City Journal. Sign up for his newsletter here.