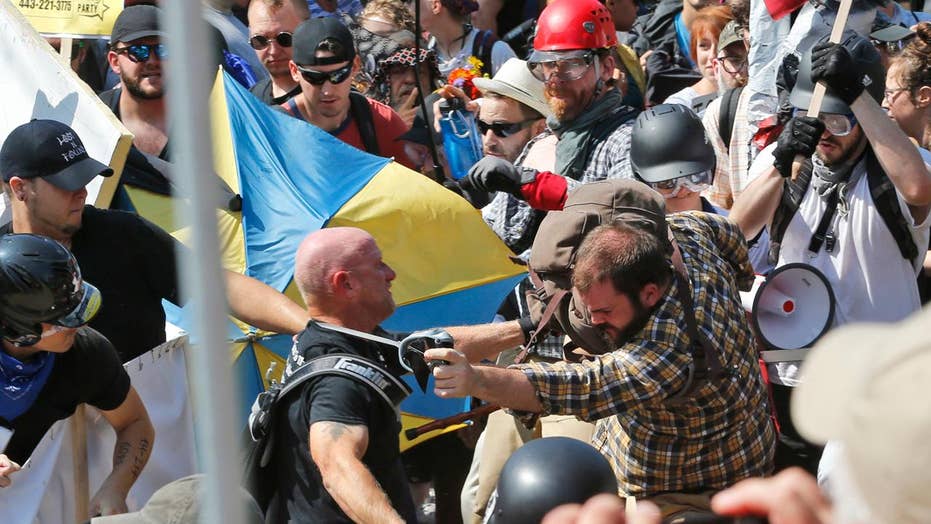 How should Americans react in wake of Charlottesville?

Our panel discusses the national reaction to the events in Charlottesville

Charlottesville is a story of liberal hubris and political opportunism and the lives they cost. It is a tragedy that never had to happen.

This spring Charlottesville’s ultra-liberal city council voted to remove an equestrian statue of General Robert E. Lee that’s been standing in a park in downtown Charlottesville since 1924, and to change the park’s name from Lee Park to Emancipation Park.

Charlottesville is, and has been, a liberal enclave for a long time; in twelve of the fourteen years we have lived there the Lee statue, or the Stonewall Jackson statue nearby, never raised a progressive eyebrow.  But after leftwing groups like Black Lives Matter began targeting Confederate Civil War monuments for vandalism and destruction in the aftermath of Ferguson, our city council decided it could score some points with BLM types by having the statue removed—and possibly avoid a violent confrontation with those same leftwing extremist groups.

Statues of dead Confederate war heroes is an issue on which we can disagree.  I admit it’s personal with me.  My great-great grandfather fought for the Union in the Civil War, and was severely wounded at the battle of Stones River.  But I am sure neither he nor anyone in his Wisconsin regiment would have wanted that statue removed or the name changed 150 years later; any more than Ulysses S. Grant or Lincoln – who spoke of the need for “charity to all and malice towards none” and “to bind the nation’s wounds” in the aftermath of America’s bloodiest conflict – would have wanted it.

It was exactly those wounds our city council decided to reopen.  At the time I warned a reporter in an interview for Cville magazine that the decision was wrong, and would backfire. Certainly if Mayor Mark Signer and other council members thought they could avoid future trouble this way, they were wildly wrong.  Instead what they did was to create a cause for every crackpot Neo-Nazi and KKK group looking for some free publicity to rally around, and an opportunity for every crackpot leftist group on Saturday, to get into the action.

The sense that something truly awful was going to happen started on Friday night, with the bizarre torchlight vigil by white supremacist groups at the University of Virginia eerily reminiscent of Nazi Party rallies in the 1930s.

The city council tried desperately to move the scene of the white supremacist rally scheduled for Saturday away from downtown, but a judge on an ACLU appeal blocked that move.  The council then yanked the rally permit, but it was too little too late. Also by now Governor Terry McAuliffe had gotten into the act, issuing warnings to citizens to stay away from the rally site and flooding the zone with hundreds of Virginia state police in riot gear.

Those state police then did nothing as the Black Lives Matter, Antifa, and assorted neo-Communist extremists began arriving that morning in their own riot gear, including helmets and shields, and began flailing away at the neo-Nazi extremists who responded in kind.  It’s still not clear who ordered the police to “stand down;” perhaps no one did.  Perhaps they simply did not want to appear on YouTube or the nightly news beating up a demonstrator, whether black or white, Brown or Red.

They only finally moved in when Governor McAuliffe declared “a state of emergency,” and only after a car driven by a white supremacist killed a young woman, Heather Heyer, after plowing into the crowd of rioters—rioters who should never been allowed to have contact with each other, let alone allowed to battle it out in the streets of Charlottesville.

Meanwhile, two state troopers were dead after their helicopter crashed.  At the end of the day they were two men simply doing their duty in a futile mission set by a do-nothing governor whose attention was focused on getting applause from the media, just like our mayor and city council—and just like the commentators afterwards who have worked hard to turn these deaths into an indictment of Donald Trump.

A governor with any sense of honor and integrity would resign after a debacle like this; so would a mayor.  But of course McAuliffe and Signer won’t.  They are symptoms, not causes, of an American political culture that has become deeply sick.

My wife and I have lived in Charlottesville fourteen years, and have been uncomfortable being conservatives in a liberal enclave.  Southern hospitality can go a long way to smooth out political differences.  Not any longer.  The infection has now swept over our beloved Charlottesville, and the scars will be with us a long time.