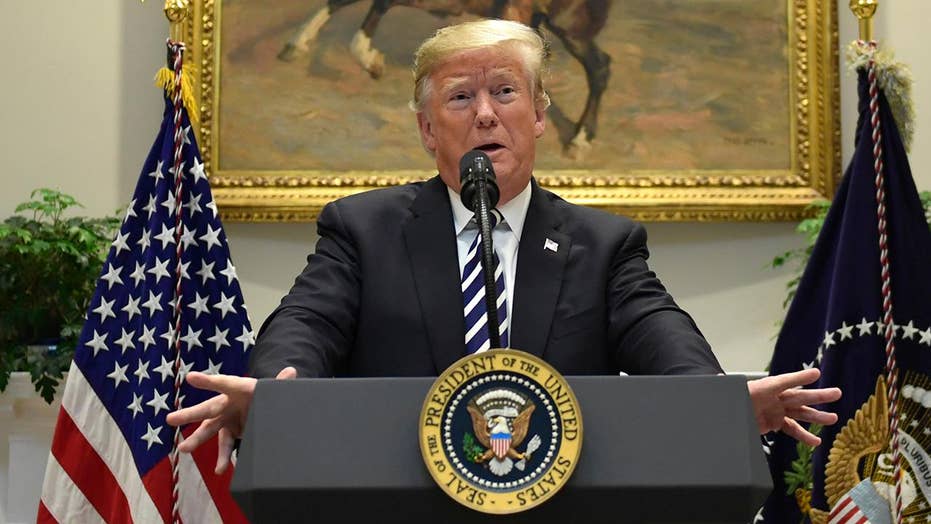 Trump explains why he refuses to accept the caravans

President Trump is making immigration his closing argument before the midterms by announcing the White House is working on executive action to change the rules for asylum seekers. John Roberts reports for 'Special Report.'

President Trump’s actions announced Thursday and in previous days to protect our southern border from illegal immigrants should be welcomed by all Americans because they will protect our national security and reduce the flow of deadly illegal drugs into our country.

The president is right when he calls the entry of illegal immigrants gathered in caravans now traveling through Mexico “an invasion.” While his critics accuse the president of playing politics with the immigration issue, in reality he is fulfilling his responsibility to defend our nation by sending several thousand troops to protect our border and taking other actions.

In remarks at the White House on Thursday the president said he will require immigrants seeking asylum in the U.S. to “lawfully present themselves” at a port of entry.

President Trump also announced the end of the “catch and release” policy under which illegal immigrants apprehended by U.S. law enforcement officers are given court dates and then released –  enabling many to melt into the population, never show up in court and remain in the U.S. illegally.

The president’s plan to review and tighten the controls over our immigrant asylum process also makes sense. As he pointed out, U.S. law requires that people applying for asylum need to show a “credible fear” of prosecution for political, religious or a small number of other factors – not simply that they are coming to America to escape poverty and improve their living standards.

We’ll know more about President Trump’s proposals next week, when he said he will issue a “comprehensive” executive order on immigration.

Earlier this week the president indicated that he will attempt to reverse the concept of birthright citizenship for the children of people in the U.S. illegally.

Legal experts differ on whether the 14th Amendment to the Constitution requires that anyone born on U.S. soil automatically acquires American citizenship – even if the child is the son or daughter of an illegal immigrant.

President Trump has said he believes he has the power to end birthright citizenship for such children by executive order. If he takes the action, it is sure to be challenged legally and the case will inevitably wind up in the Supreme Court.

“Caravan” is the latest term in Orwellian Newspeak for what we call a collection of several thousand individuals, of dubious origin and organization, who are currently traveling through Mexico toward the U.S. southern border. All of them have been clearly warned not to come and President Trump issued that warning again Thursday.

Yet they are coming.

There is a disconnect between politicians and influencers who manufacture ideas of open borders and ordinary citizens who are the emotional and ideological consumers of those same ideas.

Americans watch images of people walking through Central America and Mexico and experience a variety of emotions.

Many of us feel guilt and compassion. On TV we see the suffering of impoverished migrants walking day after day – hungry and tired, sleeping on the streets. Because we live in far better conditions in the U.S., many of us want to help those less fortunate.

And many Americans feel outrage at the suffering of migrant families being separated at our border and held in detention. So it’s natural that many Americans want to hold someone in our own government accountable.

Powerful stuff, these things called feelings. And there’s no question that Democrats are exploiting these feelings to get more votes in Tuesday’s midterm elections as they seek to use the issue of illegal immigrants to falsely portray President Trump and Republicans as cruel and uncaring bigots who hate all immigrants.

Nothing could be further from the truth. President Trump has said many times that he welcomes legal immigrants – his own mother was a legal immigrant and so is first lady Melania Trump.

"Mass uncontrolled immigration is especially unfair to the many wonderful law-abiding immigrants already living here, who followed the rules and waited their turn," the president said Thursday.

But as President Trump pointed out, we can’t simply open our borders to all the people around the world who want to come to America.

There are more than 7.5 billion people in the world – but only about 329 million live in the U.S. How could we cope with the sudden influx of hundreds of millions – or even a billion or more – immigrants from around the world coming to our country if we allowed whoever wanted entry to move to America?

There is not a single Democratic politician, pundit, contributor, or celebrity who is going to open up their usually lavish homes to let the illegal immigrants in the caravan move in for an extended stay while they get their feet on the ground. There is not one of them who is going to take on a vow of poverty and surrender his or her wealth for the comfort and support of illegal immigrants.

No, they expect the American taxpayer to fork over billions of dollars to feed, house, educate, assimilate and provide health care to wave after wave of illegal immigrants.

If President Trump keeps his promise at his press conference, then the illegal immigrants in the caravans heading to the U.S. – as well as other immigrants – are going to be stopped at the U.S.-Mexico border.

If violence results and any of the migrants are killed, no doubt the Democrats will use their deaths for political propaganda purposes to get votes and strengthen their drive to impeach President Trump.

As President Trump said Thursday: "If these caravans are allowed into our country, only bigger and more emboldened caravans will follow – and you see that's what's happening now."

Once we lose our border protection, the road to citizenship, voting and welfare benefits for a flood of new immigrants will be all but paved.

Americans now buying caravan T-shirts – based on their emotions of guilt, compassion, and outrage – will gradually see those emotions replaced with fear, frustration, and resentment.

But by then it will be too late. Our nation will have already slid too far down the path of losing its identity. My advice to President Trump is to hold firm. Yes, America is a nation of immigrants – but the immigrants have to enter legally. Throwing open our borders to everyone who wants to enter is impractical and could cause grave harm to our nation and the American people.