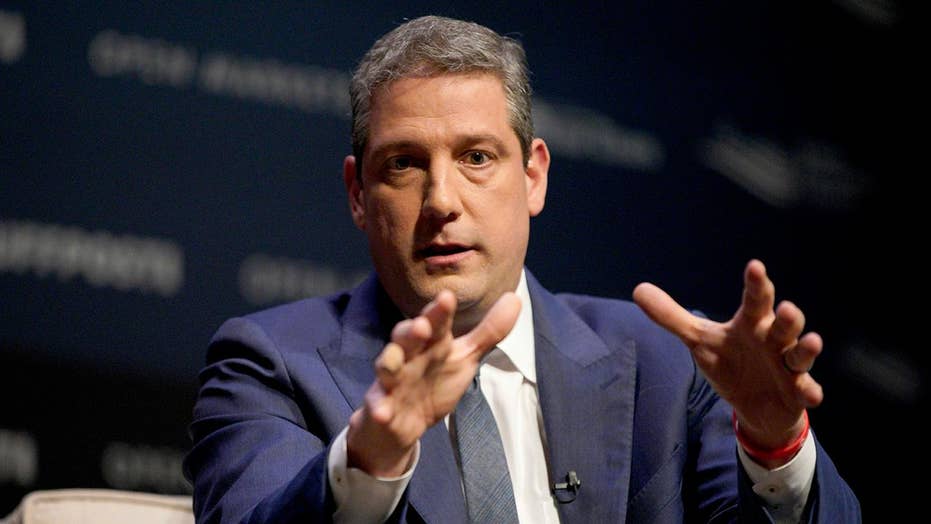 'The Next Revolution' panel reacts.

With every passing week, the Democratic presidential primary field continues to grow. Last week was no different. Yet another Democrat officially joined the race for the White House. This time, however, the candidate was anything but the same.

Democratic Ohio Rep. Tim Ryan introduced himself to the nation on the daytime talk show, "The View." He followed his public announcement with a rally in his congressional district and an obligatory appearance on one of the Sunday shows.

I’m sure there are some out there who are rolling their eyes at the prospect of yet another candidate in an already crowded Democratic primary. Even more are probably asking, “Who is Tim Ryan and why should I care?”

CAPRI CAFARO: DEMS WHO WANT TO WIN IN 2020 SHOULD GIVE BIDEN A CHANCE

Tim Ryan is my congressman, and you should care because he is one of the few Democrats, if not the only one, who has a real shot taking on President Trump in a general election. I have known Tim Ryan for the better part of two decades. We are from the same county and both served our community — four years apart — in the same state Senate seat.

Before I go any further, I want to make some things very clear. Tim Ryan did not ask me to write this article. We have not discussed what I would say in this column. I did alert him to the fact that I was planning to write a piece on his presidential bid. That’s as far as it goes. So I want you to know this article is not some inside job set up by the Ryan camp. It also has nothing to do with any future political aspirations some think I have. I am simply stating my views about a candidate who I think can win and why.

Ryan has been the underdog throughout his political career. He won a seat in the state Senate by beating much more well-known and established candidates. His success was built on sheer sweat equity — by going door to door and developing a grassroots movement from scratch.

A few years later, Ryan beat a long-time incumbent for a congressional seat that changed due to redistricting. No one thought a kid under 30 was going to beat a seasoned member of Congress, but he did. Ryan’s underdog story can similarly propel him to defy the odds on the national stage.

What makes Ryan different from the rest of the Democratic field? He grew up in the heart of the American industrial Midwest. He represents communities in northeastern Ohio that voted Democrat for generations — until Donald Trump came along. Unlike many candidates who are veering to the far left, Ryan understands that the economy, education and health care are the issues that drive heartland voters.

From the first interviews of his presidential campaign, Ryan has been speaking out about the perils of China, the need to reform trade, and to invest in reinvigorating communities that have been left behind. On CBS’ "Face The Nation," Ryan noted that such revitalization efforts would need a balanced partnership between the public and private sector.

Tim is an approachable, straight-talking former football star turned public servant. Tim could be your brother, your neighbor, or your kid’s coach. He is also quick to tell you about his yoga practice and commitment to mindfulness.

In some ways, Tim Ryan is the Gen X answer to Joe Biden. He can connect with working men and women in a genuine way while understanding the nuances of 21st century American culture, politics and economic innovation. Ryan can connect with our roots while embracing our future.

Over the last few months, Democrats have gone through love affairs with a variety of presidential hopefuls, from Kamala Harris to Beto O’Rourke. I happen to think this crowded Democratic primary plays to Tim Ryan’s advantage. With so many candidates occupying the progressive corner of the party, it opens up an opportunity for someone more moderate to consolidate votes and campaign contributions from across the country — while the progressives are competing over the same slice of electoral pie. A well-executed 50 state delegate strategy could spell primary victory for Ryan.

Ryan is the Democrat best positioned to beat Trump because he is young, from the Midwest and able to win with Democrats who voted for Trump in 2016. And the GOP is already showing signs of concern about Ryan. The Republican National Committee wasted no time to take shots at him, calling Ryan a “backbencher … who has no chance of becoming president.”

It sounds like Ryan becoming president is exactly what Republicans are worried about.