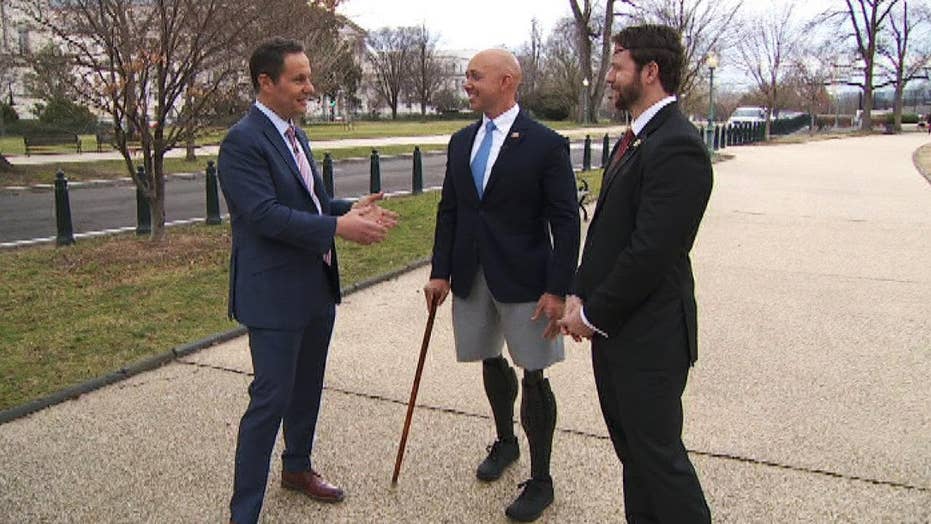 Brian Kilmeade spends the day with Republican Reps. Dan Crenshaw and Brian Mast to see what it is like for a combat veteran and former Navy SEAL to serve in Congress.

Ten years ago today, while serving in the Army in Afghanistan, I tried to disarm one bomb too many and was greeted with a blinding light.

It wasn’t like the movies; there was no time to register what was happening. In an instant, an improvised explosive device (IED) blasted me backward through the air like an uppercut from a heavyweight boxer.

Stunned, I tried to stand up but realized I couldn’t, and it took me a few seconds to realize why.

I raised my left arm and saw each of my fingers bent in a different direction: two of them were barely hanging on and one of them would ultimately be sewn into me for over a month.

I lifted my head and saw my brothers-in-arms running toward me to apply tourniquets to what was left of my legs and arm.

The last thing I remember was them saluting me as I was lifted via stretcher into a helicopter and hearing them say I was going to be OK.

Looking back now, their simple message was the most important thing that happened to me that day. While it was hard to envision what life would look like back then, a decade later, I know that they were right.

Since my injury on September 19, 2010—what in military parlance is called my “Alive Day”—my life has changed considerably.

When I last closed my eyes I could hike over the Hindu Kush mountains with a hundred pounds on my back on a whim. When I opened them I didn’t know if I’d even be able to walk my son to sleep if he was crying.

When I woke up in Walter Reed Army Medical Center following the explosion, I could only think of my wife and our 6-month-old baby.

When I woke up in the hospital, I didn’t have a college degree and didn’t know what my life would be like now that my Army service had been cut dramatically short.

Ten years later, I’ve earned a degree from Harvard and I have the opportunity every day to go out there and fight for the community I call home as a representative in Congress.

Ten years ago I had no relationship with The Lord, and today, I have a faith that keeps me at peace through all trials.

The credit for my recovery starts with those simple words from my fellow soldiers but belongs in large part to my father and the decade of hard work that resulted from his advice.

He has been a source of wisdom throughout my entire life, but no words have impacted me as much as what he said as I lay recovering in that hospital room.

His message was that if I sat on my butt feeling sorry for myself, my son would start thinking that’s an acceptable way to go through life.

It was tough to hear but there was no more important message my father could have given me.

In the blink of an eye, I went from someone who could do anything I wanted to someone unsure of anything I could do in the future.

There is no time for self-pity in a country that affords each of us as many opportunities for self-betterment as the United States of America does.

When I last closed my eyes I could hike over the Hindu Kush mountains with a hundred pounds on my back on a whim. When I opened them I didn’t know if I’d even be able to walk my son to sleep if he was crying.

I quickly realized my dad was right.

There is no time for self-pity in a country that affords each of us as many opportunities for self-betterment as the United States of America does.

Saying “poor me” wasn’t an option because I still had a lifetime of service and self-improvement ahead of me.

Relearning how to walk wasn’t easy, but more challenging than the physical therapy is the continuous journey of self-improvement I’ve embarked on over the past 10 years.

I’ve learned about economics, government and environmental science in the process of earning a Harvard degree.

As both a resident and representative of Florida’s Treasure Coast, I’ve learned from so many about the fight for clean water.

Most importantly, I am continually learning how to be a better father to my three rambunctious boys and beautiful little girl.

Rep. Brian Mast with his father and his family

A lot has changed over the past 10 years, both for me personally and for our country.

The one constant throughout, however, has been the opportunities that I’ve had—and that we all have—as a result of living in the freest country in the world.

No doubt I’ve stumbled as many times in my goal to be a role model to my kids as I did throughout my early days of learning to walk with prosthetic legs.

Stumbling, however, is inevitable. What matters is the will and the grit to get back up, to seize the opportunities our country gives us, and to make the most of ourselves in the process.

That’s why, on this ten year anniversary of my injury, I am more determined than ever to prevent America from falling prey to Speaker Nancy Pelosi’s vision of Americans.

She sees us as weak and unable to overcome the explosions in our lives.

She sees us as needing to be protected by a big government bureaucracy and coddled into thinking it is acceptable to violently torment cities across the country.

What Speaker Pelosi and her allies in Congress don’t seem to understand is that there is no bill, law or lawmaker that can make us more capable than our own will alone.

Government has never been and should never be the spirit of America.

The spirit of America is service in pursuit of justice and sacrifice for causes bigger than ourselves.

The spirit of America is the amazing accomplishments of individuals who inspire everyone they meet with how they have utilized our country’s freedom.

You don’t need to lose two legs and an index finger to make this commitment. You only need the grit, the hustle and the motivation to make each day better than the last.

That is something no bomb can blast away, and that is why I resolve each Alive Day to become a better version of myself by the next one—for my father, for my children, for my wife, for my God, and for my country.

So, today, I offer you the same encouragement that my fellow soldiers gave me 10 years ago today: whatever the explosion that may upend your life, know that you will be OK.