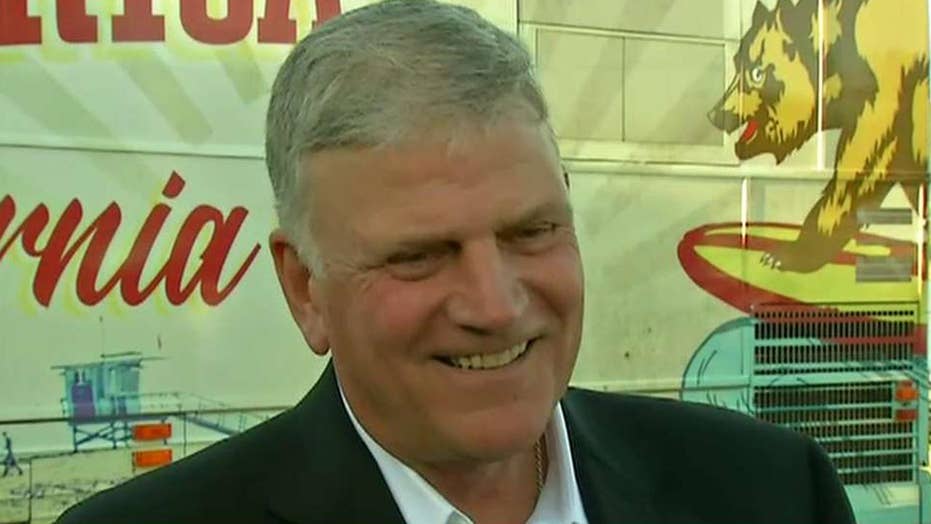 The editorial published this week in Christianity Today calling for President Trump to be removed from office highlights the difficult choice facing evangelical Christians like me in determining who to support in the November presidential election.

In the editorial, Christianity Today’s editor-in-chief, Mark Galli, wrote: “The president of the United States attempted to use his political power to coerce a foreign leader to harass and discredit one of the president’s political opponents. That is not only a violation of the Constitution; more importantly, it is profoundly immoral."

Galli added that Trump “has hired and fired a number of people who are now convicted criminals. He himself has admitted to immoral actions in business and his relationship with women, about which he remains proud. His Twitter feed alone – with its habitual string of mischaracterizations, lies, and slanders – is a near perfect example of a human being who is morally lost and confused."

This attack prompted our counterpunching president to tweet: “A far left magazine, or very ‘progressive,’ as some would call it … knows nothing about reading a perfect transcript of a routine phone call and would rather... have a Radical Left nonbeliever, who wants to take your religion & your guns, than Donald Trump as your President. No President has done more for the Evangelical community, and it’s not even close. You’ll not get anything from those Dems on stage. I won’t be reading ET [SIC] again!”

Since there appears to be no chance the Republican-controlled Senate will remove the president from office once he goes on trial following his impeachment by the House, evangelicals will be confronted with this choice when we vote in the next presidential election:

Do we support a painfully brash and unpredictable president who violates our morals but defends some of our values?

Or do we support the presidential candidate nominated by the Democratic Party, which has expressed open disdain for our sincerely held views?

It’s a complicated scenario, confronting us with two imperfect choices. And since the Democrats are a long way from selecting their nominee, it strikes me as an impossible choice to make until we know who President Trump will be running against and can examine that person’s record and values closely.

In the meantime, I think supporting Trump while simultaneously speaking out against his sometimes disturbing rhetoric is healthy. So is finding areas of praise for the president when you aren’t a fan. Our nation, after all, is called the United States – not the Divided States.

Few political candidates are entirely bad or entirely good. When we step into the voting booth we are sometimes forced to choose between the lesser of two evils.

There’s been no shortage of chaos, drama and debate over whether Trump –  a thrice-married businessman known for his brutal brashness, alleged shady business dealings, and lack of strong religious observance – is worthy of evangelical support.

The evangelical divide is a microcosm of our broader cultural decay. Party politics are dominating our hearts and minds. Nearly everyone is feeling intense pressure to buckle toward one side of the aisle or the other. Evangelicals are no exception.

As a lifelong conservative evangelical who is also a millennial journalist and author, I feel the weight of this paradigm in a particularly pointed way.

I interviewed Trump a number of times before he became president and I’ve written more than 12,000 articles about faith and culture, with many of those stories focusing on the intersection of Christianity and politics.

This is my wheelhouse both personally and professionally, yet I’ve never felt more conflicted about where my allegiances should fall and how my faith should play out at the polls.

While prominent evangelicals duke it out, I’ve found myself living in the gray, attempting to compartmentalize and comprehend where we are. How did we get here? How do we best preserve our witness so that we can hold onto some semblance of dignity in generations to come?

In the process, a number of important questions and concerns have come to mind. As Christians, we’re called to adhere to truth, even if it sometimes positions us against our chosen candidate or party. Yet cultural tribalism has enveloped us into political and social chaos.

And amid the consternation, some questions emerge: Why have so many evangelicals – people who have spent decades fighting moral turpitude among our political and cultural elite – seemingly and abruptly changed course in the Trump era?

Why are so many fair-minded Christians previously capable of seeing the complexities in our candidates and politicians suddenly unable to offer grace and understanding, specifically when doing so is more than warranted?

I don’t have the answers, but I do know that there are four facts about Trump and evangelicals that most people are missing – elements that should force us all to think deeper about our current circumstances.

Our mission is to bring people to God, not to blindly and inadvertently lead them away. Plainly stated: our silence and excuse-making for Trump speaks volumes.

The latest example of Trump’s disturbing rhetoric came this week when he blasted Rep. Debbie Dingell’s late husband, Rep. John Dingell, and pondered whether Dingell might be “looking up” from hell.

John Dingell was a Michigan Democrat and World War II veteran who served in Congress longer than any other member – from 1955 to 2015. His wife was elected to his House seat after he retired.

There is no defense of Trump’s cruel comment, which Debbie Dingell said was very upsetting as she continues to mourn the loss of her beloved husband. And yet some of the same people who would have spontaneously combusted had former President Barack Obama said the same thing about a former member of Congress ignore it when it comes out of Trump’s mouth, for the sake of political expediency.

Progressives paved this road of apathy and desperation

Much of the critique surrounding evangelicals and Trump is predicated upon liberals’ claims that Christians have simply abandoned our principles. But the reality is much more complex.

A progressive cohort has held disdain for Christian values, either openly mocking or outright criticizing evangelicals’ beliefs about the importance of integrity and values in the public square. This mockery – teamed with an obsessive and oft-times ill-understood view of the separation of church and state – has consistently peppered our political discourse.

Now the same people who held such open disdain when evangelicals wished to see our views reflected in the public square are complaining that Christians have suddenly changed course and are no longer wedded to the morality we once demanded in our politics.

It’s a prime example of what happens when one cries wolf for decades and then gets what he or she endlessly wished for. In many ways, evangelicals are choosing to separate politics from their theology – the very thing that was previously demanded of us.

Cultural messages are eclipsing our values

One doesn’t need to look too far to see that the underbelly of our culture is slowly rotting away. Hopelessness abounds, as we abandon solidified values rooted in truth in exchange for social relativism And Christians, too, have fallen prey to this paradigm.

In 2011, just 30 percent of white evangelicals said “elected officials can still perform their public duties in an ethical manner even if they have committed immoral personal acts.” Somehow, though, that proportion skyrocketed to 72 percent in a 2016 survey.

There are many theories as to why this change unfolded, with some blaming the Trump effect.

Evangelicals are feeling the pressure

Beyond the “terrible options” scenario is the fact that our culture has rapidly changed over the past few years, eschewing traditional values and diminishing core Christian positions. What was once considered a normative perspective can now be disqualifying, with the outrage police working overtime to ensure that everyone complies with culture’s new codes of conduct.

Meanwhile, the Democratic Party has moved to the far, far left on issues like abortion, with Democratic candidates perceived as so extreme that Trump – whether or not he has authentic convictions on these matters – seems like the only viable option.

As I’ve discussed in my books and research, many evangelicals feel like we are being punished or silenced for our biblical worldview, with the power players in the mainstream media, Hollywood and universities doing anything but alleviating those fears.

Many of us wish politics could be like the movies – with clearly identified good guys and bad guys, making it easy to root for the heroes and boo the villains.

But real life isn’t like that – there are good and bad aspects to every candidate and every political party.

As we move into a campaign year, we will be looking closely at President Trump and the Democrat nominated to run against him to see which imperfect person we think will best serve our nation and support our sincerely held beliefs.