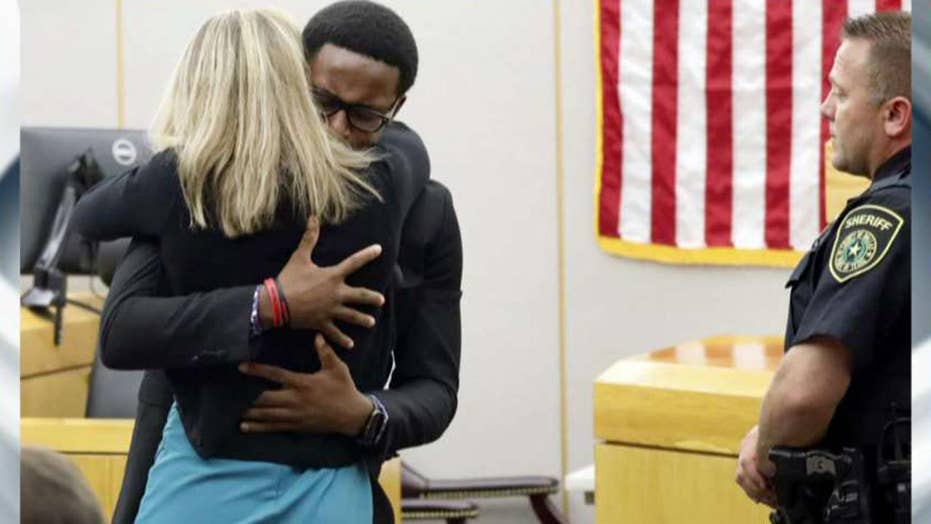 Americans are captivated by the amazing forgiveness story out of Texas – a young man’s bold decision to not only forgive, but to openly embrace the ex-cop who killed his brother.

Video of the courtroom moment Wednesday when Brandt Jean – the 18-year-old brother of victim Botham Jean – chose to forgive and then embrace convicted killer Amber Guyger left many viewers in tears as the power of true faith and restoration was on full display.

But there was another element of the story that sparked some intense controversy: the presiding judge’s decision to also embrace and give her Bible to the convicted killer.

Judge Tammy Kemp brought a Bible into the courtroom after Jean’s stunning act of forgiveness and handed it to Guyger before delivering a powerful message about hope, redemption and life change.

“You can have mine. I have three or four at home,” Kemp told the convicted killer when the judge handed her the Bible. “You just need a tiny mustard seed of faith. You start with this.”

And Kemp wasn’t done there. She referenced John 3:16, embraced Guyger and offered an essential truth that can benefit all of our lives: “You haven’t done so much that you can’t be forgiven. You did something bad in one moment in time. What you do now matters.”

This was a moment that further touched many hearts, but some critics like writer Jemele Hill took a starkly different view on the matter, calling Kemp’s handling of the matter “unacceptable.”

“How Botham Jean’s brother chooses to grieve is his business. He’s entitled to that,” she tweeted. “But this judge choosing to hug this woman is unacceptable. Keep in mind this convicted murderer is the same one who laughed about Martin Luther King Jr’s assassination, and killing ppl on sight.”

Hill is entitled to her opinion, but she and others miss the mark on the true depths of the remarkable moment that unfolded before the eyes of a weary and divided nation – a country so culturally splintered and desperate for hope, forgiveness and compassion that the bold audacity displayed by both Jean and Kemp stopped nearly everyone in his or her tracks.

Their extraordinary display placed grace, humanity, love and forgiveness in front of hate, anger and condemnation. As for Kemp – an official charged with upholding the law – she could have simply left the courtroom; she could have chosen to ignore Guyger and move on with her day.

But, instead, the judge looked beyond herself and outside of the terrible and horrific mistakes that Guyger made, and she saw a human being – an individual in need of truth, restoration and the saving grace that can only be found in the gospel narrative.

Regardless of what one believes about faith and God, the judge’s kind act is not only commendable, but it’s essential. It doesn’t wipe away Guyger’s crime; instead, it offers her a pathway to the only spiritual antidote available.

Perhaps people don’t realize the true call Christians have to “love God” and “love others.” These aren’t mere words. They are a true and oft-times difficult calling for believers to live like Jesus. In the Gospel of Matthew, Jesus implores his followers to love their enemies and “pray for those who persecute you.” In Romans, Paul tells Christians to feed and help their enemies.

On the cross, Jesus himself asks God to forgive those crucifying him, saying, “they do not know what they are doing.” I could go on and on, as this is the central message of the Bible.

Kemp both saw Guyger as more than a convicted killer. She saw her as a human being in need of God’s love, and that’s a powerful reminder of the level of kindness and compassion that we are called to as Christians and human beings.

No matter what you believe about faith, it shouldn’t be difficult to understand this judge’s pure motive to help this woman seek true heart change.