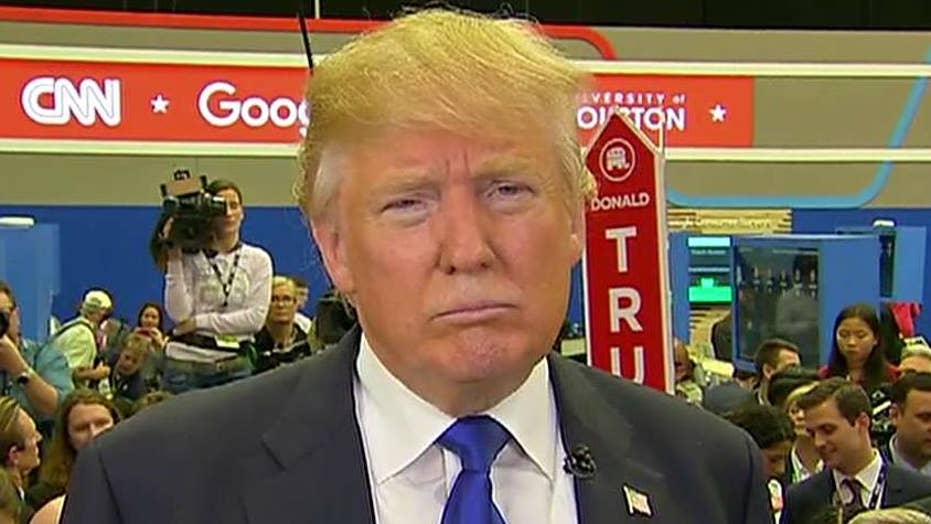 Trump: I knew Rubio and Cruz would come after me

Thursday night in Houston we met the Marco Rubio who was meant to be the most electable candidate in the Republican field.

He was sharp, articulate, cutting, passionate and bold. And he’s been all those things before. Indeed, he was either the winner or had the second best showing as compared to Trump in the first few debates for exactly these reasons.

But what was different on Thursday night was that Rubio showed real backbone. He knew that fresh off second place finishes he needed to make the case that not only is Donald Trump is unhinged, unprincipled and has no concrete plans, but also that he is much better equipped to be president than Ted Cruz, his chief rival.

Cruz was certainly marginalized Thursday night. As arguably the best debater on the stage, he made very few comments that anyone will remember by the weekend. His strongest points came early on when he called Trump out for not really caring about illegal immigration since he hires illegal immigrants to build his properties and that we can’t trust Trump to nominate traditional constitutionalists to the Supreme Court because he’s supported key Democratic figures like the Clintons, Harry Reid and Nancy Pelosi in the past. He was also strong in his defense of Israel, drawing a start contrast with Trump who has said that he would try to be neutral in the Israeli/Palestinian conflict.

But Cruz was an afterthought Thursday evening compared to Rubio. The Florida senator relentlessly hit Trump on his inconsistencies and hypocrisy. “If Trump builds the wall [on the Mexican border] like he built Trump Tower, he'll be using illegal immigrants,” might very well be the best line of the debate and one of Rubio’s strongest points. He continually encouraged viewers to Google “Donald Trump polish workers.” Viewers who took him up on it were led to articles on Trump’s practice of hiring illegal immigrants. Rubio also  pushed Trump to define his health care plan and accused him of repeating himself – “America will win again” specifically – over and over again.

And Rubio didn’t do well by just attacking Trump. His defense of limited government, free enterprise and a strong national defense as the guiding principles of the conservative movement that he wants to be the standard bearer of was spirited and downright presidential.

Furthermore, Rubio remains the most convincing commander-in-chief the GOP is offering. He knows his stuff and has clear plans to address all the major issues we’re facing including, but not limited to, fighting Islamic terrorism, handling North Korea and China as well as how we should be striking a balance between privacy and national security.

That said, it’s my belief that while Rubio took advantage of his last chance to attack Trump before Super Tuesday – and that he did it very well – it won’t be enough to change the alignment of the candidates. Trump had a decent night. It wasn’t his best performance, but what’s growing increasingly clear is that it doesn’t really matter.

More so than with any other candidate, Trump’s voters make up their minds early. They are committed to him and after big wins in New Hampshire, South Carolina and Nevada, Trump has shown that his base will turn out to vote for him even though they’re largely from groups that don’t typically vote in primaries (lower income, high school educated). And with leads in every Super Tuesday state except for Texas where Cruz is slightly ahead, there’s no reason to think that Thursday night’s debate changes the trajectory.

As for Carson and Kasich, the debate in Houston showed that they really are running peripheral candidacies and there isn’t much reason to go on.

Kasich would still have a good case to be a vice presidential choice without eating up votes that could go to Rubio. And it’s not altogether clear what’s motivating Carson to carry on.

All this is to say that it’s a Trump world and the rest of the candidates are just living in it. We better get used to it.