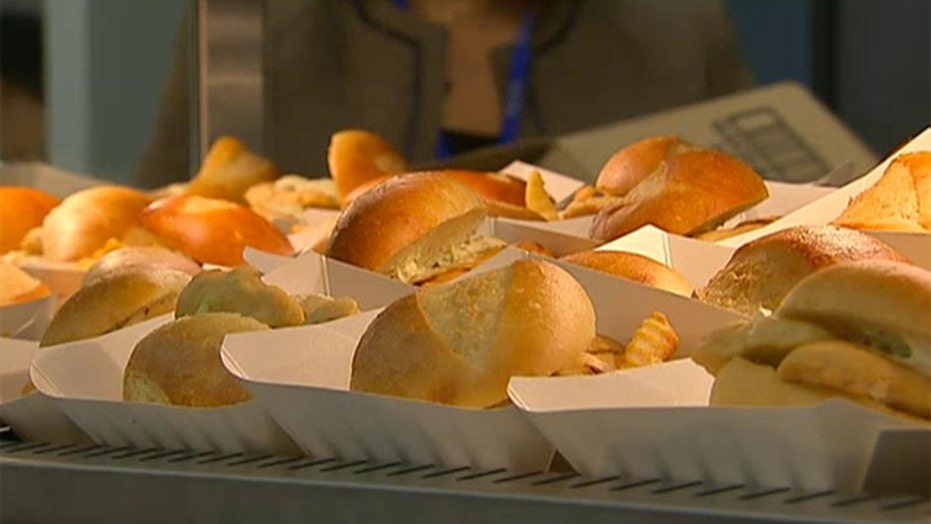 It’s been nearly five years since the White House and the first lady pushed through stricter guidelines for school lunch programs in legislation known as the “Healthy Hunger-Free Kids Act.” But students nationwide have continued to complain about dreary dismal portions and a lack of variety, posting pictures of food left on trays with a sarcastic “#ThanksMichelleObama.”
Enter Chartwells, a private company that is taking the government’s strict regulations and turning them into savory yet healthy baked lunches that no kid can refuse.

Fox News went to the Union City, N.J., Public School District, where one in four kids are living in poverty, and we discovered incredible enthusiasm and compliance with school meals, from breakfast to dinner. The district is being fully reimbursed by the state and federal government for compliance, and the kids are eating it up.

“You have a variety of seven different feeding stations,” Anthony N. Dragona, school administrator and secretary of the Union City Board of Education, said in an interview. “Create your own salad, create your own sandwich, whole wheat pasta bar. We incorporate parent, students, faculty, and we ask them, what do you want to see in your cafeteria?”

Dragona said that without a private company like Chartwells to lend a hand, food ends up being left on the plate. On their own, school districts are hard pressed to come up with innovative solutions in cafeteria design, menu creation, and school nutrition education. Dragona emphasized that Chartwells forges a partnership between parents and the school community.

Margie Saidel, vice president of nutrition, culinary, and sustainability at Chartwells, brings close to 20 years of experience in child nutrition and food service to the lunch table. Speaking about the National School Lunch Program, she agreed with Dragona, “That’s been difficult for a lot of school districts, and they’ve seen their participation drop. But what we have decided is we are focusing on the taste and a full balanced meal.”

We still had our doubts when we arrived at Union City High School, but it soon became clear that Dragona and Saidel are right, Chartwells has taken the USDA guidelines and converted them into something with a lot of variety, a lot of health and a lot of choice. Just try a baked veggie roll and see for yourself.

“We bring our team of experts, registered dietitians, culinarians and our food management expertise,” Saidel said. “All the meals here are rich in color, all whole grain, many fruits and vegetables.”

Student liaison Josie Martinez said she preferred Chartwells’ baked french fries to the fried kind. “It's not as greasy and it tastes a lot better,” she said. “It doesn't slow you down later on, and it makes you feel more energetic.”

She said the kids were actually eating fruits and vegetables, even broccoli.

“Because the food tastes so great, they participate,” Seidel said. “And the more they participate, the higher the revenue is for the school district. All schools in the National School Lunch Program have the ability to do that.”

The National School Lunch Program cost the government $70 million when it began in 1947. It’s now in over 100,000 public and non-profit private schools and residential child care organizations, and it costs over $12 billion. As of 2012, more than 31 million children were getting their lunch through the program every day. Of those, 2.7 million had Chartwells as an intermediary.

And Chartwells isn’t alone. Another larger national food company, Aramark, is servicing public school lunch programs in urban areas around the country, and in New Jersey, a local vender called Masschio is doing the same thing.

Chartwells adds flavor, variety and exciting presentation to the food, and it uses a smartphone app, “Nutrislice,” that presents students and parents with the week’s menu and nutrition information in advance. Focus groups and a voting system give the students control over what they see in the lunch line.

“You’re empowering the students,” Dragona says. “It’s not that the district is just giving them lunch. They’re actually helping to shape it.”

Dragona said that Chartwells has been working with Union City School District for 18 years. When the new national school lunch guidelines were adopted five years ago and other school districts cringed and thought they might resist, Dragona said that Union City embraced them, since they already had many of the guidelines in place and much more. The school district had long focused on decreasing amounts of fats and sugars and increasing fruits and vegetables.

According to Dragona, they switched to whole grains and stopped frying six years ago.

Sure, Chartwells turns a profit, but they work under a “break even” contract with Union City, where no matter what the cost, it doesn’t cost the school district anything. The federal government reimburses the school $2.30 for lunch, with a little more than half the students at full participation and the rest at 60 percent participation. More than enough to keep everyone happy and well fed.

One walk through the elementary school is all you need to be convinced that a private solution can turn a floundering public program around. We asked a group of 7 and 8-year-olds if they were enjoying the food, and they shouted in unison, “Yes!”

Allison Hedges is a field producer for "Fox & Friends" on Fox News Channel.