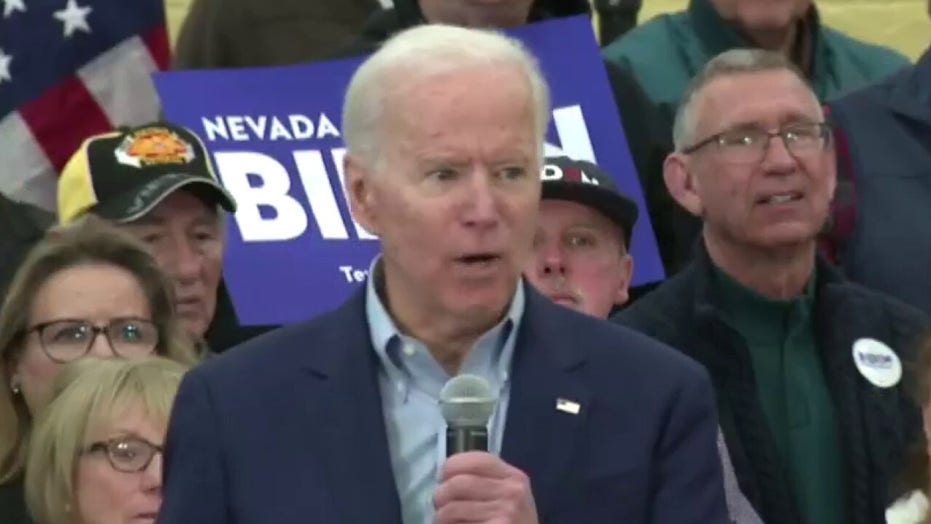 Ari Fleischer calls out media for not covering Biden allegations

Joe Biden has never been a good presidential candidate. With his personal problems mounting, the plain truth remains that Joe Biden is not able to unify the Democrat Party. The disclosure of his Senate papers housed at the University of Delaware could well be the final straw in breaking his candidacy and Biden knows it.

Last April, Biden was the presumptive nominee of the Democrats – or so the left-of-center media told us. Once again, Biden looked like a good candidate before he got into the race. As I said in my April 1, 2019, column, Biden “is a good potential candidate but a bad actual candidate.”

Twice before Biden ran for president and both times he failed badly, despite media claims he was an ideal candidate. This third time hasn’t been the charm either.

Biden dropped from the top perch as soon as he started campaigning in 2019. By the fall, Democrats were flirting with candidate after candidate to replace the weak Joe Biden. First, it was Sen. Elizabeth Warren, D-Mass. Then former New York Mayor Michael Bloomberg was supposed to come to the rescue. After the first of the year, Sen. Bernie Sanders, I-Vt., was poised to win the nomination.

To save themselves from a socialist defeat in November, the Democrats “brokered” their nomination in broad daylight leading up to Super Tuesday. Former South Bend Mayor Pete Buttigieg and Sen. Amy Klobuchar, D-Minn., were induced to drop out of the race so fourth-place Biden could win primaries over Sanders.

With just two candidates in the race, Democrats lined up behind Biden, to the point that Sanders conceded. Even so, the Democrat Party remained divided.

Despite mounting endorsements, Biden scored the worst every enthusiasm rating for a party nominee in a Washington Post/ABC poll. Part of that stemmed from Sanders followers who were upset once again about the treatment of their candidate and the direction of the Democratic Party.

Normally, a presumptive nominee moves toward the middle once a nomination is secured. But Biden’s nomination, as a technical matter, is not secured. He still does not have the necessary delegates. To quell doubts within his party, Biden has had to move left to gain the support of the far left among Democrats.

Biden has spoken out more about environmental issues – even saying the COVID-19 crisis was an opportunity to enact Green New Deal policies not favored by most Americans. Biden has adopted part of the free college mantra of Warren and Sanders, as well as Warren’s position on bankruptcies. Biden also has walked away from the Obama administration’s record on deportations.

Unfortunately, that still has not convinced the left side of his party that he is good enough. For example, 25 percent of Bernie voters are still not sold on Biden and only 50 percent of Latinos expressed a willingness to vote for him in a recent poll.

All of which brings us to Delaware. In a recent interview in which he denied sexual assault allegations made by his former Senate staffer Tara Reade, Biden made this extraordinary comment:

The reason Biden wants his records kept under wraps is that he knows they will prevent him from unifying Democrats. His positions will further divide his party and divided parties cannot win national elections.

“There’s a lot of things — of speeches I’ve made, positions I’ve taken, interviews that I did overseas with people — all of those things related to my job. And the idea that they would all be made public … while I was running for public office, they can be really taken out of context ... For example, when I go, when I met with Putin or when I met with whomever.”

That is a mind-boggling position for a candidate for the highest office in the land to take. Biden literally is saying that he does not want Americans to know the positions he has taken prior to voting for him.

The reason for all that is the plain truth encapsulated in this headline from the liberal LA Times in March 2019: "The burden of a 40-year career: Some of Joe Biden’s record doesn’t age well."

That is why Biden doesn’t want files about his public speeches disgorged.

We can’t forget that the moment in the sun for Sen. Kamala Harris, D-Calif., was when she attacked Biden on his busing record. He also knows his prior position on gay marriage, i.e. voting to outlaw it, is out of step with today’s Democrats, as well as his stance on reforming Social Security and Medicare.

The reason Biden wants his records kept under wraps is that he knows they will prevent him from unifying Democrats. His positions will further divide his party and divided parties cannot win national elections. Look no further than the Democrat Party of 1968 that split over Vietnam and lost to Richard Nixon.

In sum, Biden’s papers are an inconvenient truth about his record that he doesn’t want to be rehashed at this moment in time. He literally doesn’t want American’s to know what he has said and done in an era when his party has attempted to investigate every aspect of Donald Trump imaginable.

Fortunately, enough Americans are wise enough to see through Joe’s smokescreen. The lack of enthusiasm for his candidacy, while ignored by some pollsters, speaks volumes – perhaps even more than the volumes of papers Biden is seeking to hide.