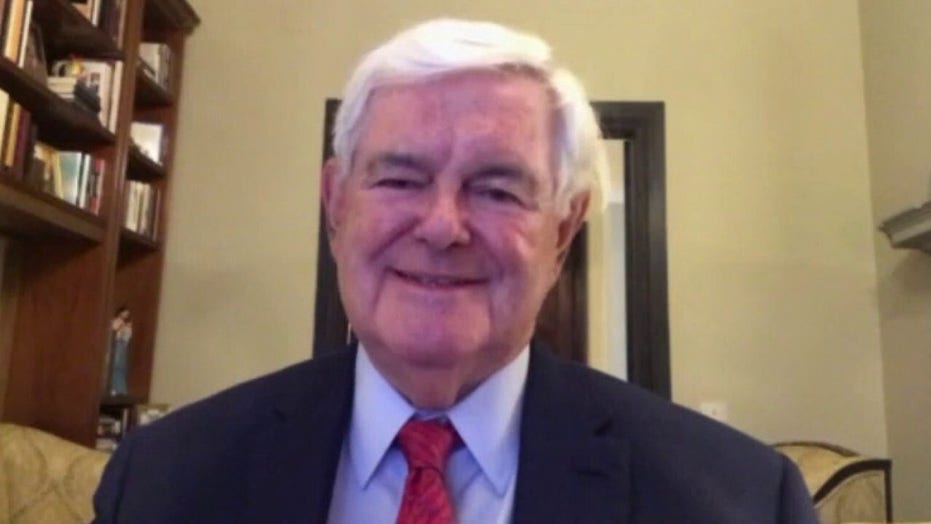 Fox News contributor Newt Gingrich shares his thoughts on the Democratic and Republicanconventions and the presidential race.

As an observer of conventions and presidential campaigns going back to 1956, I am confident in predicting that this week’s Democratic National Convention will be the high-water mark before the collapse of the Joe Biden-Kamala Harris ticket.

As the ticket collapses, it will start to move into the 1972 George McGovern range of isolation from the American people. Ironically, the physical isolation of Biden over the last few months has slowed down the political isolation, which will presently occur.

Three factors will lead to the collapse of the Biden-Harris ticket over the next six weeks.

DNC EMCEE EVA LONGORIA MOCKED ON SOCIAL MEDIA: 'NO ONE IS MORE IN TOUCH ... THAN ACTORS & CELEBRITIES'

First, presumptive Democratic presidential nominee Joe Biden is clearly incapable of functioning as president. Every time he comes out from hiding in the basement, it is embarrassingly clear that he could not possibly negotiate with Chinese Communist Party General Secretary Xi Jinping or Russian President Vladimir Putin to any positive effect.

He is performing weaker and weaker with each passing week. Even when his campaign can control every aspect of his events or appearances, there is something pathetic about Biden’s inability to project strength or articulate any firm ideas.

I received an email from the Biden-Harris headquarters which showed a gif of Biden and Harris coming out of a doorway. Both were looking down or away and not interacting with anyone (including each other). The email asked, “Have you ever seen two people who look this ready to lead on Day 1?” I was flummoxed. They didn’t look ready to do anything.

The question was a parody of their problem, and the image was embarrassing. I was astounded because the material had been made by the Biden campaign which had total control of the product. Biden does not look like he is ready to lead. He is looking down like he wants to make sure he doesn’t fall down. 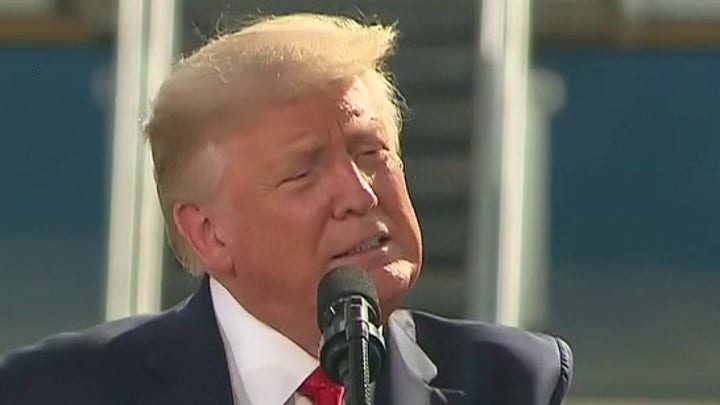 Chris Wallace captured the absurdity of a presidential candidate trying to hide his way to the White House with a “basement strategy,” when he told Guy Benson, “It’s the damnedest thing I’ve ever seen.”

Americans are picking up on the implications of Biden’s hiding. In one survey by Rasmussen Reports, 38% of American voters said they thought the former vice president was in cognitive decline (of course, most of those were Trump supporters).

And, in a more recent report, Rasmussen Reports said 59% of likely voters believe Biden’s vice-presidential choice will become president during the next four years. That included 49% of Democrats, 57% of independents, and 73% of Republicans.

When nearly six out of every ten Americans think you are not likely to finish a four-year term, it is hardly an endorsement of your fitness. The more Biden has to campaign and actually appear in uncontrolled environments, the bigger this problem will become.

Of course, if even half your party and nearly six out of ten independents think the vice-presidential nominee will become president, there is even greater pressure on. Harris to be a strong candidate. We already know that she isn’t.

The real danger to the Democrats is the item-by-item alienation of different groups of Americans based on adopting positions that please radicals but are deeply opposed by most Americans.

This leads to the second factor: Harris will prove to be the most disastrous vice presidential nominee since Sen. Tom Eagleton, D-Mo., had to resign from the McGovern ticket when it turned out he had been subjected to shock therapy treatments for mental issues (I am not criticizing mental illness or its treatment, but in 1972, Americans simply did not want to think of a potential president having mental illness).

As a presidential candidate, Harris had wavered between embracing the most radical positions and then opportunistically changing to more moderate positions when she got blowback. She was as unreliable in her policy positions as she was in her attacks on Biden. She aggressively attacked Biden on four different occasions and has since repudiated her own words. If Biden is exhausted and hiding in a basement, his running mate is energetically bouncing all over the place with no consistency or reliability.

During the primary, Harris was at 15% support in July 2019. She then dropped as low as 3.5% support by November 2019, according to Real Clear Politics. Even in her home state of California, she had dropped to fourth behind Biden, Warren and Sanders – and was only attracting 8% support from her own constituents before she dropped out. In fact, 61% of Californians thought she ought to drop out of the presidential race, according to a poll by the Berkeley Institute of Governmental Studies for the Los Angeles Times.

The Democrats (and propaganda media) believe that she will be powerful in attracting the African American vote. This is undermined by the objective reality that in November 2019, after months of campaigning, a Quinnipiac University poll showed Harris was fourth in attracting Black voters. Biden had 44%, Sanders had 10%, Warren had 8%, and Harris was down to 6% of the Black vote. When Biden was drawing nearly eight Black votes for every vote Harris was getting, so why would the Democrats think adding her to the ticket was a smart idea.

Finally, as the depth of radicalism of the Biden-Harris platform and the Chuck Schumer-Nancy Pelosi legislative agenda become clear to the American people, they will be increasingly alienated from the new radical Democratic Party and its candidates. The increasing radicalism is already beginning to sink in.

The real change in public opinion will begin shortly after the Democratic National Convention as the Trump campaign and its allies (including virtually all Republican candidates) point out these specific threats to specific groups.

1. The Biden-Harris commitment to renew the Obama effort to destroy suburban neighborhoods is a direct threat to the peace of mind for two-thirds of the American people – including a large number of African American and Latino suburbanites.

2. Biden-Harris' support of using taxpayer money to pay for abortions through the ninth month of pregnancy is opposed even by many pro-choice Americans (and is a break with Biden’s entire career of supporting the Hyde Amendment, which bars taxpayer money from paying for abortions).

3. The commitment in HR 6800, which 207 House Democrats supported and Biden endorsed, to pay coronavirus relief payments to some people in the country illegally is deeply unpopular.

5. The Democratic mayors and district attorneys (many elected with George Soros’ money) represent a pro-criminal future that is exploding into violence. As Democrats continue to publicly praise soft on crime prosecutors and cry “defund the police,” the choice in November will become pro-police vs. pro-criminal, and there is a huge majority against violence.

6. The teachers’ unions own the Democratic Party, and their blackmail approach to reopening schools is isolating them from Americans. Remember: Florida Gov. Ron DeSantis earned 18 percent of Black female votes against a Black Democratic opponent on the issue of school choice.

The list goes on, but these first six radical, alienating ideas give you some notion of how rapidly the support for Biden and Harris may fade.

The propaganda media has done (and will likely continue to do) all it can to protect Biden in the basement. He has quietly slipped further and further to the left under their protective non-coverage.

Now, the Democrats are trapped with a presidential candidate who 38% of the country thinks has cognitive issues and 59% believe will not be able to finish his first term in office. Meanwhile, his replacement is proven incompetent as a campaigner and a textbook opportunist on core issues.

I expect the Democrats’ Biden-Harris dream will quickly become a nightmare. As I wrote in my latest book "Trump and the American Future" we are about to watch a repeat of McGovern in 1972.