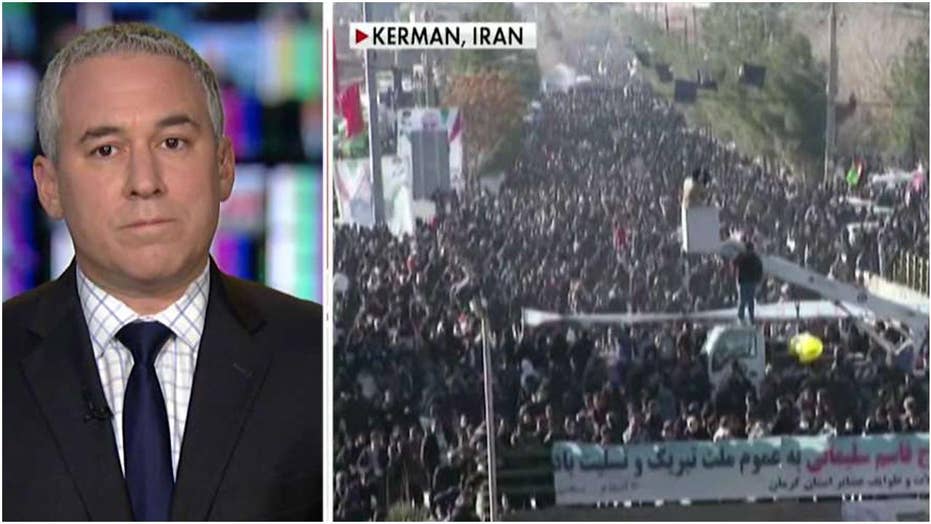 The Iranian missile attack on U.S. forces in Iraq appears to have been aimed at not killing Americans, says Jonathan Schanzer, senior vice president for research at the Foundation for Defense of Democracies.

President Trump launched a global round of teeth gnashing when he ordered the killing of the greatest terrorist leader in the modern Middle East, Iran's Gen. Qassem Soleimani.

Soleimani was unquestionably responsible for the deaths of hundreds of Americans in Iraq and thousands of others throughout the Middle East -- mostly Muslim. His global terror network ran from South America to Europe to Africa to Lebanon, Syria, Yemen and Iraq. Soleimani was an unparalleled organizer and a pitiless murderer. His death was richly earned.

But for many in the media and on the domestic and international left, Trump's action was precipitously "provocative."

Sen. Elizabeth Warren, D-Mass., suggested that Trump, not the Iranians, had "escalated" the situation. Former Vice President Joe Biden said that Trump had "just tossed a stick of dynamite into a tinderbox."

This reaction has been magnified by the media, many of whom have been speculating about the possibility of all-out war between the United States and Iran. Think pieces have been written about whether the United States will reactivate the draft (spoiler alert: No, we won't). Musings have filled the newspapers about the supposed conflagration prompted not by Iranian evil but by Trumpian reactivity.

All of this smacks less of legitimate concern about what comes next than it does of sheer panic that Trump has overturned a decade of American and European appeasement of the Iranian regime.

Ben Rhodes, former President Obama's deputy national security adviser, architect of the Iran deal and an overt liar who told the American public that Iran was on its way to moderation if only the United States would loosen economic restrictions on the terror state, has placed blame for volatility squarely before Trump.

Susan Rice, the Obama national security adviser who told the American public that Islamic terror against our Benghazi embassy was rooted in anger over a YouTube video, soberly informed Americans that "Americans would be wise to brace for war."

Biden suggested that in throwing out the Iran deal, Trump had paved the way for war -- and, oh, by the way, the Iran deal was "airtight."

This is a deliberate misreading of history designed to absolve the Obama administration of its Iran policy debacle. The administration pursued a policy of strengthening Iran economically -- and did so while openly acknowledging that Iran would use that newly gained economic strength to pursue terrorism and ballistic missile testing.

In speaking of the sanctions relief given to Iran, then-Secretary of State John Kerry explained in January 2016, "I think that some of it will end up in the hands of the IRGC or other entities, some of which are labeled terrorists."

That's precisely what happened. In March 2016, then-U.S. Central Command nominee Army Gen. Joseph Votel said that Iran had become "more aggressive" since the advent of the nuclear deal. Indeed, Iran has built up Hezbollah in Lebanon, propped up Bashar Assad in Syria, increased its presence in Iraq and bolstered its war in Yemen.

In the past few months, Iran and its proxies have attacked shipping in the Strait of Hormuz, Saudi oil facilities, an American drone and an American embassy, among other targets. All of this occurred while the Trump administration did little or nothing in response.

Then Trump ordered the killing of Soleimani. Suddenly, we have been informed by dishonest Democrats and their media allies, Iran has gone rogue.

Nonsense. Iran has been rogue for decades. The Iran deal was simply an attempt to whistle past the graveyard with the terror regime -- to pay it off long enough so that President Obama could declare the problem handled. This was, after all, the Obama strategy in Crimea and Syria: Declare a red line; run away from it; pretend that pusillanimous inaction is bravery and deterrence provocation.

Trump thought differently. Now Iran has come face to face with the prospect that actions have consequences -- and those consequences don't involve pallets of cash being shipped over to fund terror organizations that span the globe.

Ben Shapiro is host of "The Ben Shapiro Show" and editor-in-chief of DailyWire.com. He is the author of the No. 1 New York Times bestseller "The Right Side Of History."
ADVERTISEMENT