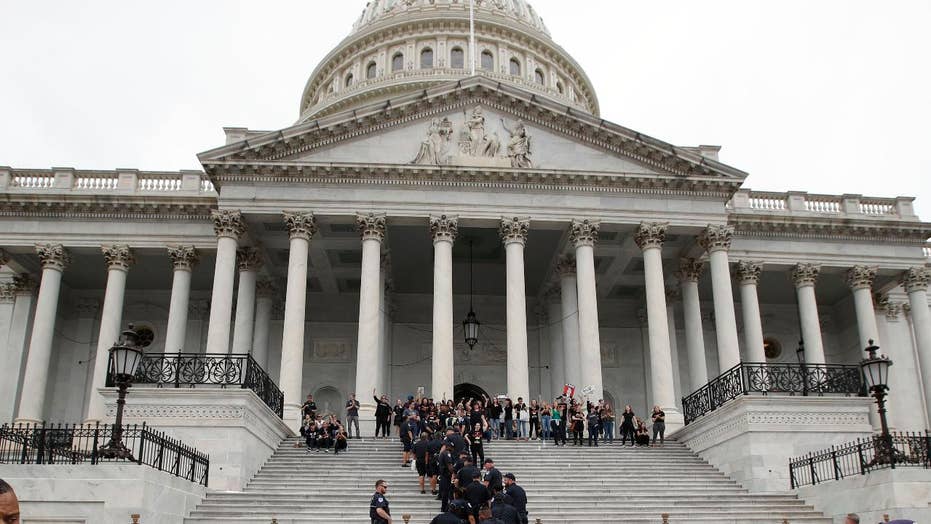 If Democrats win the House and Senate in 2018, conservatives should be prepared for an all-out assault on their values.

The 2018 election is just 21 days away. Republicans have gained ground in the Senate over the last week. In the House, however, Republicans trail badly: a new CNN poll has Republicans down 13 points in the generic Congressional ballot, and even the more optimistic Economist poll has them down 6 points.

All of this should motivate you to get out and vote. Because if Democrats win the House and Senate in 2018, conservatives should be prepared for an all-out assault on their values -- and an assault on President Trump from the media that makes the last 2 years look like child’s play.

Here are ten reasons you should get out and vote on November 6 – and vote Republican.

1. The Courts. For generations, the left has stacked the courts with judicial activists determined to read their priorities into the law by twisting the Constitution beyond recognition. President Trump and Senate Majority Leader Mitch McConnell have successfully remade the federal judiciary by appointing and confirming judges dedicated to the proposition that the Constitution must be read as it was written. If Democrats somehow win back the Senate, they will hold open every single judicial seat, hoping that a Democrat takes the White House in 2020. Then they’ll go right back to rigging the judicial branch, using it as a club with which to destroy Constitutional rights and traditional values.

2. The Investigations. Democrats have already pledged investigations into every aspect of President Trump’s life. They’ll subpoena every member of government they can get their hands on. And we know that they don’t care about guilt or innocence – after all, they just tried to railroad a federal judge by claiming, without corroborating evidence, that he was an alleged gang rapist. In fact, Democrats have already pledged to launch another investigation into Justice Kavanaugh, hoping to undo the results of the confirmation vote. If you enjoyed the disgusting spectacle of Democrats trying to destroy due process of law, get ready for more.

3. Impeachment. While Democratic leadership has been lukewarm on the idea of impeaching President Trump, the base won’t settle for anything less if the Democrats take the House of Representatives. They’ll demand that Trump be impeached for any reason whatsoever – and then they’ll push the narrative that corrupt Republicans don’t care about the rule of law. Now, it’s just possible that Democrats could create a backlash that helps President Trump – that voters react to impeachment by supporting him. But that’s a risky proposition at best.

4. The Economy. President Trump’s chief selling point in his re-election effort will be the economy. And Democrats are dedicated to stifling economic growth if it means stopping Trump. They’ll hold up budgets, blow out spending, push for harsh anti-business regulation. They’ll kill the predictable pro-business climate President Trump has carefully crafted. The stock market will tumble as Wall Street begins to price in the effect of Democratic governance. And businesses will start to sock away capital again to prepare for the possibility that a unified Democratic government could enter Washington in 2020.

5. Foreign Policy. President Trump has done a fantastic job of drawing us closer to our allies and throwing a scare into our enemies. He’s done so because Republicans in Congress are willing to bolster our defense spending as necessary. The same isn’t true of Democrats, who would immediately move to cut defense spending, signaling to the world that President Obama’s weak-kneed foreign policy is back. Democrats would also attempt to undermine sanctions against the Iranian regime in keeping with Obama-era foreign policy.

6. Polarizing Culture Wars. We’ve already seen the Democrats suggest that mob politics is the new normal. We’ve seen the Democrats capitalize on racial issues to polarize the country; we’ve seen them try to divide Americans by class and sex as well. With the platform of Congress, look for Democrats to attempt a series of divisive maneuvers intended to relaunch the culture wars in new and frightening ways.

7. Attacks on Religious Liberty. President Trump has been stalwart in his defense of religious liberty. Democrats will be just as stalwart in their attacks on religious liberty. They’ll surely attempt to push so-called anti-discrimination laws directed at religious businesses, churches, and schools – and then they’ll dare President Trump to veto them so that they can claim that he is a bigot.

9. Radical Growth of the Democrat-Media Complex. We already know that the mainstream media institutions are dominated by Democratic supporters. And we know that those Democratic supporters will parrot any talking points the Democratic Party pushes. But with Democrats in power pushing every line of attack simultaneously, the media’s never-ending firehose of anti-Republican propaganda will merely widen the nozzle. If you’re worried about media bias now, wait until Democrats control the Congress and put President Trump in their sights.

10. Mob Rule. Democrats believe that they must lash out in anger in order to win in 2018. If they do win, they’ll double down on that anger, hoping it carries them to victory in 2020. Like the mobs invading the Senate and the steps of the Supreme Court? Enjoying top Democratic officials nodding and smiling at crowds harassing Republicans in restaurants? Get ready for much, much more. The only way to shut down the Democrats’ new mob rule strategy is to stop them cold at the ballot box.

In 2016, Hillary Clinton lost the presidency because Democrats didn’t show up to vote. They simply assumed that she’d sweep to victory. They were wrong.

Today, Republicans feel optimistic after the confirmation of Brett Kavanaugh. That’s understandable. I do, too. But that optimism shouldn’t blind us to the importance of voting on November 6. This Democratic Party is more radical than ever and has embraced a nastier vision of politics than ever. But that doesn’t mean they’re fated to lose.

Your vote matters. Your vote counts. Get out there on Election Day and ensure that the Democratic Party of Nancy Pelosi and Chuck Schumer aren’t allowed anywhere near the levers of power.