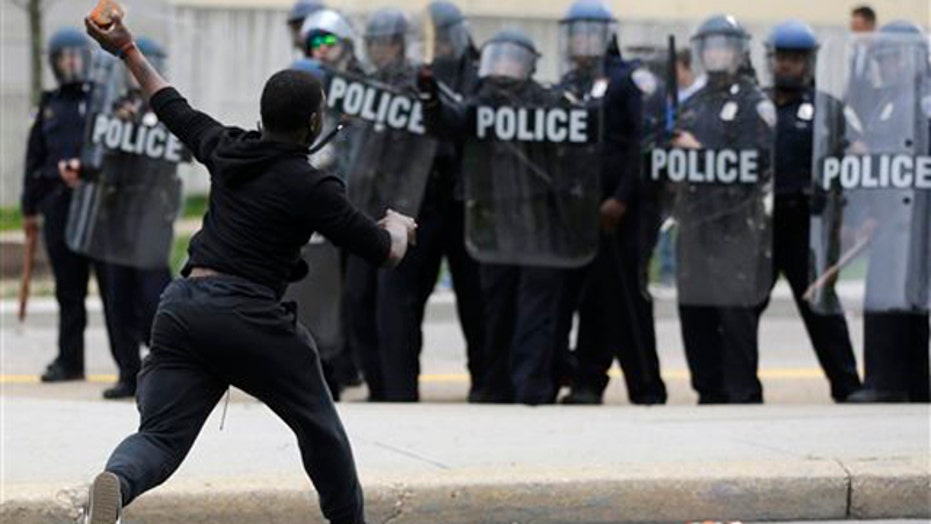 Riots erupt in Baltimore, despite call for calm

“I wanted to give space to those who wished to destroy,” that is how Baltimore Mayor Stephanie Rawlings-Blake described her policy Saturday at a press conference. Her words, which effectively told police to stand down as those gathered to protest the death of 25-year-old Freddie Gray smashed store windows, looted 7-Elevens and forced attendees at a Baltimore Oriole-Boston Red Sox baseball game to remain in the stadium because it wasn’t safe outside.

At a press conference on April 25 the mayor said, "“I made it very clear that I work with the police and instructed them to do everything that they could to make sure that the protesters were able to exercise their right to free speech. It’s a very delicate balancing act."

The resulting violence escalated as flyers were distributed describing how the city was going to have a "purge" Monday styled after the movie of the same name where all laws were suspended for one night.

On Monday alone, seven police officers were injured with one reportedly "unresponsive." Looting is occurred in broad daylight with cars being torched and bottles, rocks and other large objects being hurled at officers at close range.

It all started on Saturday night when protests turned to violent riots in the area of the tourist heavy Inner Harbor area.  Matt Boyle, a reporter for Breitbart News ended up being in the perimeter of the melee while going to attend a ballgame between the Boston Red Sox and the hometown Orioles. Boyle's live tweets of his observations of the mayhem described a dangerous, out-of-control situation that made him fear for his safety.

Boyle's later report described police standing passively by while a family trying to drive through the streets by Camden Yards found their car surrounded, windows smashed, passenger door pried open with the female passenger screaming in terror as the police observed. Fortunately, the attackers realized they were separated from the pack and chose to discontinue their assault without doing further harm.

The thin veneer of safety that is required for outsiders to venture into a place as a tourist was shredded by Mayor Rawlings-Blake's pronouncement that her citizens lives and property were not worth protecting from a violent mob. A mob set loose under the guise of protesting the tragic death of a black man at the hands of Baltimore police,which decided that it was going to attack Camden Yards and destroy businesses and threaten lives.

The Inner Harbor in Baltimore is the jewel of the Charm City’s attempt at rejuvenation, and has been a vibrant tourist destination for more than twenty years.  Orioles Park at Camden Yards is renowned as one of the most beautiful in the major leagues and has become a preferred travel destination for visiting fans.  Just down the street, Baltimore Arena stages top level plays like Wicked, along with concerts and other events that draw tourist dollars to the City.

Rawlings-Blake’s decision puts a knife to the throats of these sites as tourist destinations.

What's perhaps even worse is that the mayor's "giving space to those who wished to destroy" legitimized the actions of the rioters and encouraged an escalation effectively telling rioter and police officer alike that the city does not have either law enforcement's or the law-abiding citizen's backs as the confrontation continues to grow.

When the people know that the police have been told to stand down anarchy is sure to follow.  Then the law-abiding will lock their doors and imprison themselves while the lawless run free. And when tourists or those who live outside a city feel that it is unsafe to enjoy the entertainment provided in that town, they stay away.

While each of us can pray that sanity is restored to the streets of Maryland's largest city, it is not hard to see the damage that has been done to an economy that was resurrected by the tourist destinations on Baltimore's Chesapeake Bay harbor. Tourist destinations that just may be tainted for the foreseeable future with the devastating reputation of being unsafe.

And all because a mayor provided a not so subtle OK to the street criminals to destroy not only the city's buildings, but its good name and allowed them to rip at the fabric of civilization and the illusion of security it provides.

Now we are left to wonder who is going to spend a hot summer evening watching the Orioles play the Milwaukee Brewers if they know that they take their lives in their hands just walking to their cars to get home?