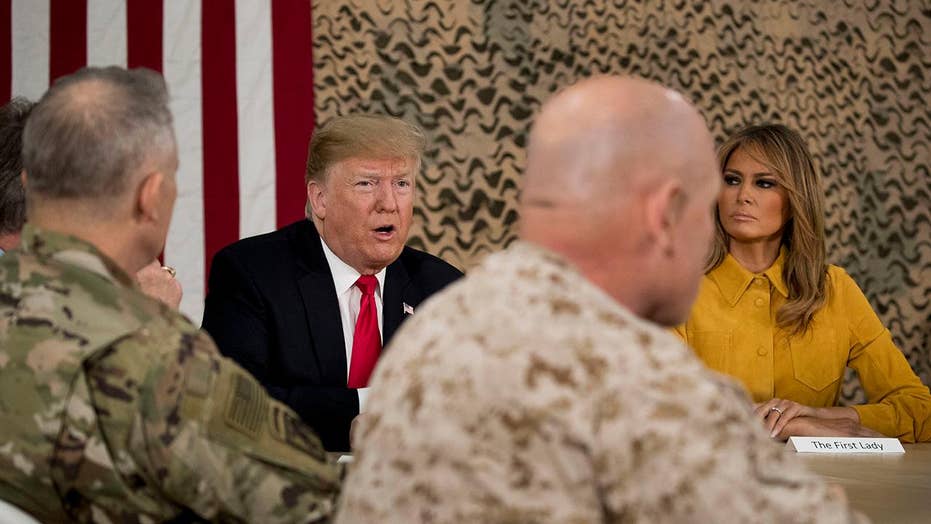 Gen. Anthony Tata reacts to the significance of the president's presence in the Middle East.

Now that he’s back at the White House after his unannounced visit Wednesday with U.S. troops in Iraq, President Trump faces the difficult task of devising a new strategy and policies to deal with the radical Islamic terrorists of ISIS in Iraq and Syria, along with the Taliban and Al Qaeda in Afghanistan.

U.S. troops have been fighting in Afghanistan for 17 years and in Iraq for 15 years, making these the longest wars in American history.

The level of fighting and the size of our troop commitments in these two theaters are down considerably since the height of these conflicts, but our terrorist enemies – although weakened – continue to pose a threat to us in these regions and beyond.

CLICK HERE FOR JOHN DALE GROVER: TRUMP SHOULD CONSIDER WITHDRAWING FROM IRAQ AS WELL AS SYRIA

With the departure of Defense Secretary James Mattis from the Pentagon next week and the president’s surprise announcement of a troop withdrawal from Syria, the American people and leaders around the world remain uncertain of where we stand in the Middle East.

The region is still suffering the aftereffects of the Arab Spring’s 2010 populist uprisings, which produced levels of unrest unprecedented since the fall of the Ottoman Empire in 1922.

President Trump has many questions to grapple with, including:

1)  Should he order further troop withdrawals in Iraq and Afghanistan in the year ahead?

2)  What are the greatest threats to the U.S. emanating from Iraq, Syria and Afghanistan?

3)  What can we do unilaterally and together with our Iraqi and Kurdish partners in Iraq and Syria, and with the government of Afghanistan, to ensure these threats are not visited on our shores?

4) What are America’s long-term plans for the three countries, and for combatting transnational terrorism elsewhere?

5)  In Afghanistan, is there any possibility of a negotiated peace settlement with the Taliban?

6)  In Iraq, how do we respond to Iran’s efforts to penetrate the Iraqi government ministries and parliament and become the dominant foreign power? After 15 years of fighting in Iraq, we don’t want that nation to turn into a close ally of Iran and become a proxy for Iranian attacks on us and our allies.

7)  How do we deal with the Shiite Popular Mobilization Units in Iraq? These militias are roadblocks to the reconciliation desperately needed between Shiite and Sunni Muslims in Iraq, in order for Iraq can become a unified country where sectarian violence – if not totally eliminated – might finally reach an acceptably low level.

With the departure of Defense Secretary James Mattis from the Pentagon next week and the president’s surprise announcement of a troop withdrawal from Syria, the American people and leaders around the world remain uncertain of where we stand in the Middle East.

President Trump’s visit to our troops in Iraq was the right move at the right time. It was also a morale booster for our men and women in uniform as well as our embassy country team, all of whom are serving in harm’s way. I know from firsthand experience – having served for three years in combat zones in the Middle East and South Asia – the extraordinary impact of a visit from the commander-in chief.

Despite his order for a withdrawal of U.S. forces from Syria, the president made it clear that he is not abandoning the fight against radical Islamic terrorists in Syria and Iraq. He expects our allies in the region to contribute more militarily and financially to combatting terrorism.

President George W. Bush made multiple visits to Iraq through which he gained a deeper understanding of the challenges we faced there. He also used the visits to build productive relationships with Iraqi senior officials, including then-Prime Minister Nouri al-Maliki.

President Bush and al-Maliki held regular conversations about the progress of the surge that increased U.S. troop strength in Iraq, effectively driving a wedge between Al Qaida and Sunni tribes.

During his visit to Iraq, President Trump did not meet with Prime Minister Abdel Abdul Mahdi, but invited him for a state visit to Washington. Building a bilateral relationship with Iraq will depend on the president’s ability to engage effectively with Abdul Mahdi.

Iraq and the U.S. have reduced the territory held by ISIS to almost nothing, but sporadic violence continues and there remains the possibility ISIS members will melt into an insurgency.

Iraq’s political instability, irreconcilable Sunnis, and economic challenges all point to fertile ground for ISIS to re-emerge like a deadly cancer if the U.S. and Iraq don’t take effective countermeasures.

President Trump’s decision not to withdraw our troops from Iraq indicates he has a longer timeline for fulfilling his campaign pledge to wind down the U.S. military commitment there.

The coming year promises to be another critical year for the Middle East and South Asia. Once he determines the path the U.S. should pursue in these combat zones, the president should speak to the American people in a broadcast address to explain where we go from here.

There is no better time for delivering the commander-in-chief’s plans for the future than after a visit to the front.