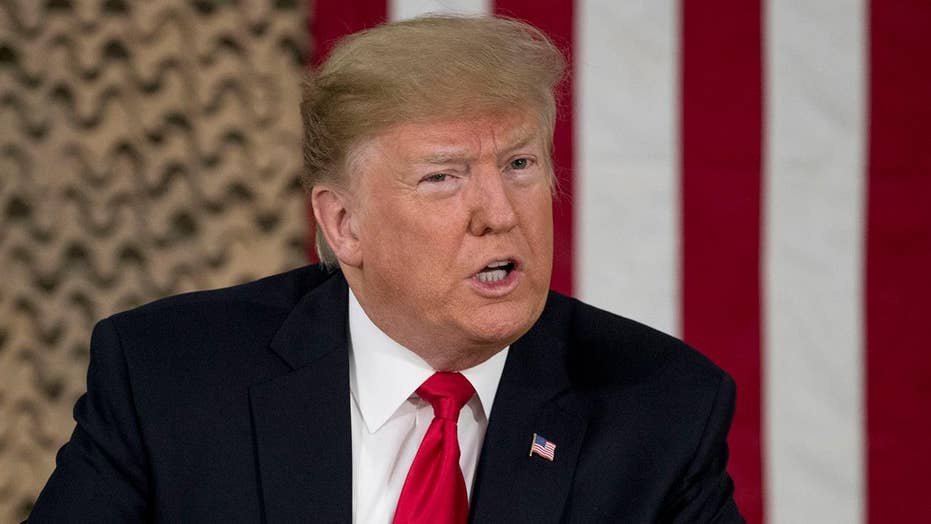 President Trump says US troops in Iraq are positioned to counter any potential ISIS resurgence in Syria.

Trump defends his decision to withdraw U.S. forces from Syria during unannounced visit to Iraq; Lucas Tomlinson reports from the Pentagon.

On his surprise visit to U.S. forces in Iraq Wednesday, President Trump defended his decision to withdraw all 2,000 U.S. troops from Syria, but said he won’t withdraw the 5,000 members of our military in Iraq.

The president should reconsider his position and determine if it makes sense to pull our troops out of Iraq as well, and decide how to best carry out such a withdrawal. Washington needs to end its obsession with the Middle East.

President Trump’s National Security Strategy rightly points out that the real long-term threat to the United States comes Russia and China. With limited dollars to spend on our military, it’s time we focused our defenses against those two powerful nations.

CLICK HERE FOR DAVID HUNT: TRUMP'S SYRIA DECISION LOOKS FRIVOLOUS IN A REGION WHERE EVERY MOVE IS DEADLY SERIOUS

Presidential candidate Trump declared on the campaign trail that he was against the Iraq War. The Defense Department reports that the conflict and the power vacuum that arose after our invasion toppled dictator Saddam Hussein in 2003 has resulted in the deaths of 4,423 members of the U.S. military and Defense Department civilians. Another 31,958 U.S. troops have been wounded in the conflict.

No one knows exactly how many Iraqi civilians have died in the fighting. An organization called Iraq Body Count – which The Washington Post calls “one of the best sources for tracking the number of civilians killed in Iraq” – estimates the number as between 182,650 and 205,043.

The Iraq War has also cost the U.S. at least $1.3 trillion. According to a study by the Watson Institute at Brown University, the total cost to the U.S. of the global war on terrorism comes to roughly $5.6 trillion – or about $23,000 for every American taxpayer.

Although the Iraq War officially ended in 2011, the brave U.S. military men and women stationed in Iraq are tasked with training Iraqi forces and conducting final operations against remnants of the ISIS terrorist group.

While it is important that any remaining territory ISIS holds is seized, the fact remains that terrorism is an idea. Terrorists are not a state that can be defeated in the traditional sense. ISIS leaders – and leaders of other terrorist groups – will not sign a final unconditional surrender document, as our enemies did at the end of World War II.

The fight against terrorists is like playing a deadly game of whack-a-mole; once you think you’ve got them, more arise elsewhere. We kill terrorists and terrorists recruit replacements. Meanwhile, the local populations turn against America’s presence and U.S. finances and strategic attention are drained.

The fight against terrorists is like playing a deadly game of whack-a-mole; once you think you’ve got them, more arise elsewhere.

Make no mistake; staying indefinitely in the Middle East pleases our adversaries in Russia, China and North Korea because it ties us down, drains our resources, and makes America less likely to challenge them.

Nuance is often lost in foreign policy debates. It is possible to advocate for troop withdrawals while also insisting the withdrawals must be carried out in coordination with allies and not abruptly.

America must fight terrorism, but our nation’s policymakers also need to recognize that there are many ways to do so. Defending against terrorism does not have to involve seemingly never-ending wars with troops stationed on foreign soil.

For instance, Washington could focus on better airport screening with less profiling, improved border security, better intelligence sharing, and assisting local allies that should do more of the fighting to defend themselves.

President Trump knows this and so does America’s military. After all, an exit poll in the 2016 election found that nearly twice as many veterans voted for Trump as did for Democratic candidate Hillary Clinton.

Trump was in favor of ending many of America’s long wars.  Clinton, as a former senator and secretary of state, was a supporter of our foreign wars.

Democratic and Republican administrations and members of Congress have asked our men and women in uniform to fight for long enough.

There are few good choices when it comes to foreign policy, and even less when dealing with the chaotic Middle East. Every action has multiple and unexpected secondary impacts.

To pretend that we must either pull our troops out of foreign conflicts immediately or keep them deployed for all time is intellectually dishonest and does a disservice to everyone involved, particularly the American fighting men and women deployed in dangerous places.

President Trump should carefully think through how to end the wars he inherited. Staying forever is not a realistic option, but the timing and details of leaving matter. It is time to refocus America’s strategy.

John Dale Grover is a fellow at Defense Priorities and a writer for Young Voices. He is also currently a graduate student at George Mason University’s School of Conflict Analysis and Resolution. His articles have appeared in Forbes, The National Interest, and Real Clear Defense.