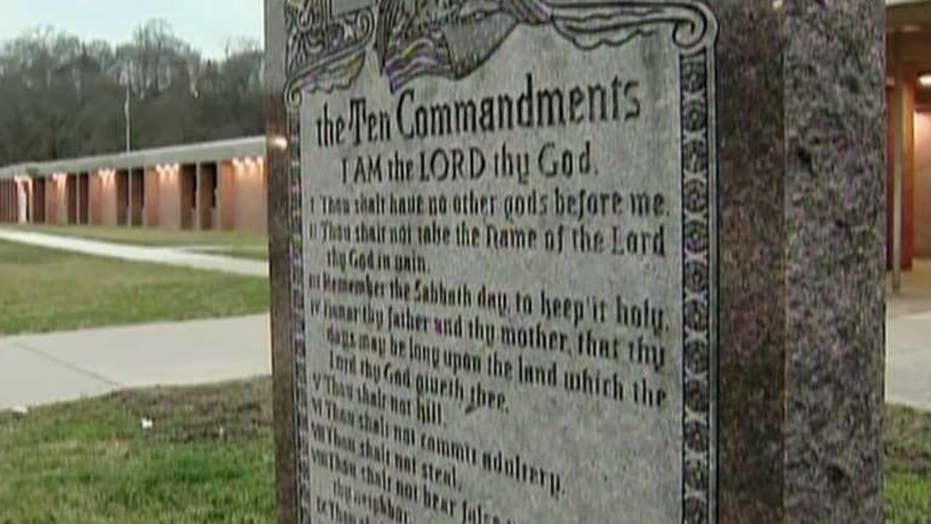 A Pennsylvania school district capitulated to the demands of a militant atheist who filed a federal lawsuit demanding the district remove a Ten Commandments monument erected on a public high school campus.

Schaub claimed the 6-foot stone monument erected outside Valley High School was a religious symbol and therefore was a violating of the U.S. Constitution.

“It’s unfortunate that many people in my community don’t understand or appreciate the separation of church and state, but I hope this settlement serves as an important lesson,” she told the Valley News Dispatch.

Schaub also claimed the monument was offensive to her and her daughter. I can only imagine which commandment she found to be most offensive. Maybe it was the one about graven images.

Click here to get Todd’s new book – learn how to fight for your freedom!

“We’re very pleased,” Freedom From Religion Foundation attorney Patrick Elliott told the Valley News Dispatch. “It means that the Constitution is being followed by the school district.”

The Freedom From Religion Foundation is a group of perpetually offended atheists, agnostics and self-professed free-thinkers based in Wisconsin. They intentionally bully and intimidate small towns and communities in their quest to eradicate Christianity from the public marketplace.

They are truly an unpleasant bunch of people, folks.

Schools Superintendent John Pallone told the local newspaper they agreed to settle the lawsuit “in order to take the high road.”

“We compromised and agreed to remove the monument,” he said.

The superintendent went on to tell the newspaper he believed the district “had a winnable case.”

“We’re in a position where we just can’t continue to fight this distraction,” he said.

The school district had an opportunity to demonstrate to children how to defend our rights under the Constitution. Instead, they chose to throw in the towel – for the sake of expedience.

And in doing so – the school district violated an eleventh commandment: Thou Shall Not Tucketh Tail and Run.