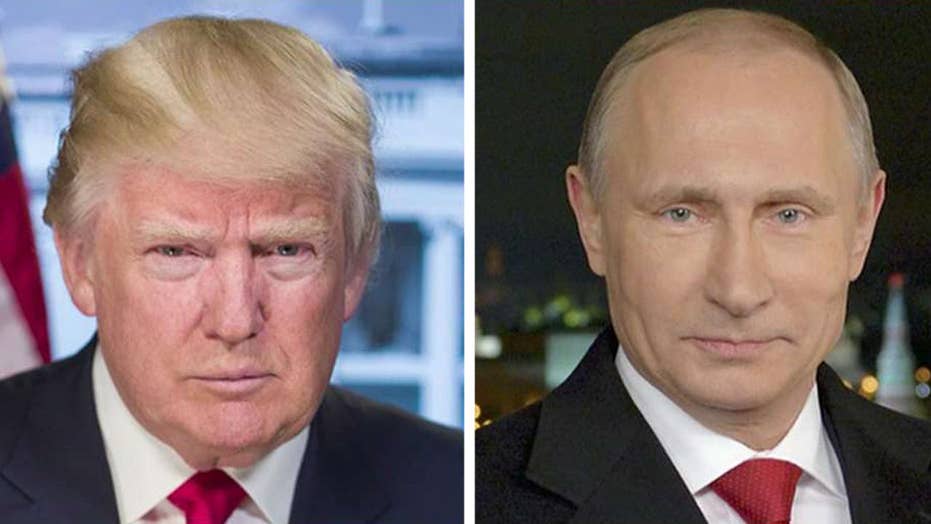 President Trump set to meet with Putin at G20 summit

In October 2013, David Letterman asked Donald Trump, his guest one night, if he’d ever met Russian President Vladimir Putin. It was a simple question and Trump quickly responded, “He’s a tough guy. I met him once.”  It wasn’t the only time President Trump would claim to have directly interacted with Putin. In 2015, Michael Savage asked Trump if he’d ever met Putin and, once again, Trump replied, “Yes.” And then adding detail, “One time. Yes, long time ago.” But, as Trump would later come to admit, this wasn’t true, he’d never actually met the Russian strongman.

In recent years, Trump has repeatedly claimed that he had met Putin, talked with Putin, or even had a relationship with Putin.  And yet, by the end of the 2016 presidential campaign, he would come to deny all of these exaggerated assertions.

The imaginary Trump-Putin relationship really began to blossom in 2013.  As Trump was excitedly preparing to bring the Miss Universe pageant to Moscow, he took to Twitter writing, “Do you think Putin will be going to The Miss Universe Pageant in November in Moscow - if so, will he become my new best friend?”

Trump did indeed invite Putin to attend the Moscow pageant, which took place in November 2013, saying “I know for a fact that he wants very much to come.”  In the end, Putin didn’t show up for the big event.  The Washington Post later reported that a one-on-one meeting between the two men was scheduled for the day before the pageant, but that Putin had cancelled at the last minute. Other press reports said the meeting didn’t happen because Trump arrived in Moscow later than originally expected.

Whatever the reason the two men weren’t able to connect in Moscow, Trump didn’t feel he had been snubbed. He’d later brag that, while in Moscow, Putin had sent him a present, a “beautiful present with a beautiful note.”  Trump also said he “spoke to all of [Putin’s] people” while in Russia.

Months later, in 2014, Trump would claim to have had much closer contact with Putin during his visit to Moscow, saying “I was in Russia, I was in Moscow recently, and I spoke indirectly and directly with President Putin who could not have been nicer.”  He also told “Fox & Friends” that, “When I went to Russia with the Miss Universe pageant, [Putin] contacted me and was so nice.”

In 2015, as Trump began his run for the presidency, he began to get cagey about his contacts with Putin.  Yet, he seemingly didn’t want to give up on the claims of contact and appeared to intentionally leave the impression that he might have talked to Putin during his time in Russia in 2013.

The day after his announcement speech in 2015, Sean Hannity asked Trump, “Have you had any contact with [Putin]?” And Trump replied, “Yes.”  When Hannity pressed Trump on whether he’d actually talked to Putin, he twice replied, “I don’t want to say.”

In September 2015, Trump didn’t dismiss the idea that Putin had unsuccessfully tried to meet with him while in New York.  On Fox News, Trump was asked, “Did Putin go up to your office and did you guys like bond or anything this week? He is in town.”  Trump oddly replied, “No, I didn't know anything about him coming to my office.”   It doesn’t appear that Putin actually made any such effort to meet with Trump at that time.

It was widely noted when, during a November 2015 Republican primary debate on the Fox Business Network, Trump said of Putin, “I got to know him very well because we were both on 60 Minutes, we were stablemates.”  In the weeks before the debate, Trump had repeatedly bragged on the campaign trail about being Putin’s “stablemate.” But, by this point, media scrutiny had greatly increased and Trump was quickly forced to admit, when appearing on Fox News the following day, that his and Putin’s “60 Minutes” segments were shot at different times.  He backtracked, saying, “No, no -- I didn't meet him. No, but they had us on together. I call us stablemates but we never met.”

When asked during a May 2016 CNN interview if he’d ever met with Putin, Trump again replied, “No.” Once again, Trump couldn’t quite quit his habit of leaving people thinking there was some kind of communication between him and Putin.  When asked if he’d ever spoken with Putin, Trump again gave his cryptic reply, “I don’t want to say.”  Fox News’ Bret Baier would later pointedly ask him about his non-answer to the question of if he’d ever spoken to Putin and Trump continued to be evasive, saying, “I have no comment on that. No comment.”  He added, “Let’s assume I did. Perhaps it was personal. You know I don't want to -- I don't want to hurt his confidence.”

In May 2016, Kremlin spokesman Dmitry Peskov put Moscow on the record, saying that Putin did not meet with Trump during his 2013 visit to Moscow.

But Trump’s on-again, off-again relationship with Putin didn’t truly come to an end until the summer of 2016. “Russia, if you’re listening, I hope you’re able to find the 30,000 emails that are missing,” Trump famously said, referencing Hillary Clinton’s missing emails during a July 2016 news conference. During the press frenzy that followed his request for Russian assistance, Trump began to speak very clearly about the extent of his relationship with Vladimir Putin.

Over and over, Trump began to tell the press that he’d never met Putin. “I never met Putin, I don't know who Putin is,” Trump said on July 27, 2016.  “Why do I have to get involved with Putin? I have nothing to do with Putin. I've never spoken to him,” Trump went on to say.

Trump’s long, complicated, and make-believe relationship with Putin had finally come to an end.  But now, with their conversations since Trump’s 2016 election and a verifiable in-person meeting scheduled to occur during the G20 summit on Friday in Germany, a genuine version of President Trump’s long-feigned relationship with Vladimir Putin can finally begin.