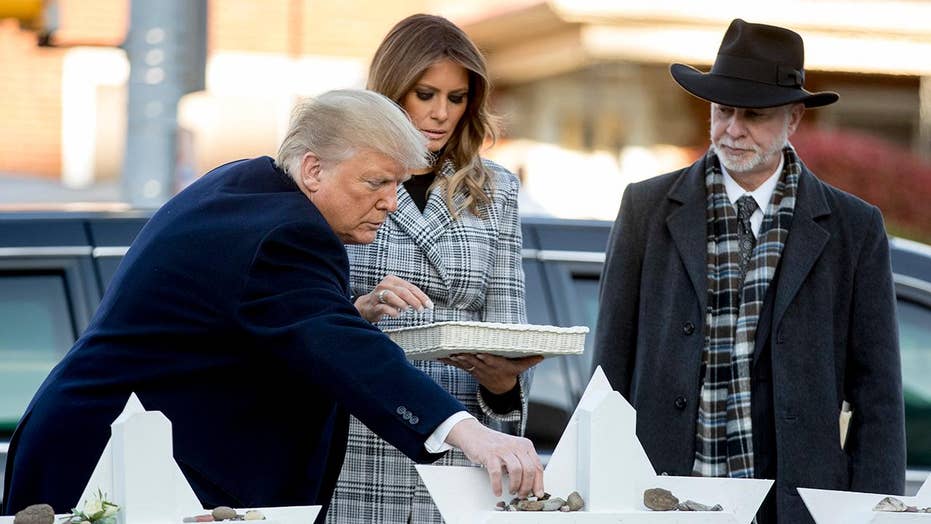 Not everyone in Pittsburgh was happy about the president's visit, despite Trump taking the role of consoler in chief. Garrett Tenney has more for 'Special Report.'

I traveled to Pittsburgh on Sunday in shock and grief, trying to grapple with the news of the devastating attack this past Shabbat at the Tree of Life synagogue.

It is hard to fully grasp that this happened here, in the United States – a nation that has been so hospitable to the Jewish community; a nation where Jewish life is so completely interwoven with the fabric of the entirety of American life itself.

This was not the first act of anti-Semitism on our shores. Regrettably, Jewish institutions and citizens have come under attack without regard to our political leadership. But this was reportedly the deadliest attack on a Jewish community in the history of the United States.

As President Trump has done repeatedly, we must condemn, with every fiber of our being, this wretched evil that spews hatred and violence against innocents solely because of their faith.

When I was around 20 years old, on my first trip to Europe, I was surprised and very saddened to see the significant police presence around synagogues in the various cities I visited.

How tragic, I thought. We were not many decades removed from the brutal murder of 6 million Jews in Europe, yet Jews and Jewish institutions still needed significant protection from anti-Semites in Europe.

But I was also comforted to think that in the United States we did not need such protection. I was fortunate to grow up with very few anti-Semitic experiences.

The anti-Semites are found on the far left and the far right – sharing a penchant for hatred and extremism. Violent and hateful words on social media are now being supplemented with violent and hateful actions.

And now we face this horrendous crime – the grisly murder of 11 Jewish people at a place of worship, during a brit milah (circumcision) ceremony – a holy, ancient and joyous ritual that celebrates the entering into of the covenant between God and the young baby boy born only eight days before the attack.

As President Trump said after the murders in Pittsburgh: “The hearts of all Americans are filled with grief. ... This evil, anti-Semitic attack is an assault on all of us. It’s an assault on humanity. It will require all of us working together to extract the hateful poison of anti-Semitism from our world.”

I am devastated by this horrific attack. But I am also devastated to know that there are evil people who dwell among us who have so much hate in their hearts that they think nothing of extinguishing the lives of others because they are Jews or because of their faith.

A murderous ideology and hatred has reared its vicious and ugly head in our great nation. Jews around the world are in grave danger from the scourge of anti-Semitism. In fact, all Americans are in danger from this scourge.

As President Trump said after the murders in Pittsburgh: “The hearts of all Americans are filled with grief. ... This evil, anti-Semitic attack is an assault on all of us. It’s an assault on humanity. It will require all of us working together to extract the hateful poison of anti-Semitism from our world.”

The president continued: “This was an anti-Semitic attack at its worst. ... we must stand with our Jewish brothers and sisters to defeat anti-Semitism and vanquish the forces of hate ... through the centuries the Jews have endured terrible persecution ... we’ve all read it; we’ve studied it. ... and those seeking their destruction, we will seek their destruction.”

These words are extremely powerful and the response of the audience who heard them was tremendous applause in agreement.

I want to thank and extend my deep gratitude and respect to the law enforcement community who risk their lives day in and day out and who do their utmost to keep all of us safe throughout our great country.

Those who responded to the attack this past Shabbat did so at great peril, as they often do. And they did so heroically. They should be honored, admired, and respected – always. It’s also vital that we recognize the interfaith communities that have stepped up in support and assistance for the Squirrel Hill neighborhood where the synagogue is located. That’s the America that I love, and that must serve as a light in this darkness.

People have asked what I’ve learned by being in Pittsburgh. They asked me what message I would bring home to my community and my family.

I answer by saying that when I arrived on Sunday, I came with a heavy heart and a pit in my stomach. I was stunned by the attack. But after spending time with this community – hearing from different faith leaders, meeting Jewish community leaders and educators, and meeting and hearing from students in Jewish schools – I leave humbled and inspired.

Both the city of Pittsburgh and its Jewish community are warm, special, close-knit and very strong. Though profoundly sad, my visit to Pittsburgh has been a meaningful trip that showed me some of the best of what America stands for.

My thoughts and prayers are with Pittsburgh and all its people as they mourn. May the memory of those lost be a blessing and may God grant a complete and speedy recovery to the six people – including four police officers – who were wounded.

May God give strength to the entire American Jewish community, together with people all over the world who are mourning with you and who seek to comfort you and to comprehend the attack and its impact on communities around America and around the world.

May America recover and grow stronger together.