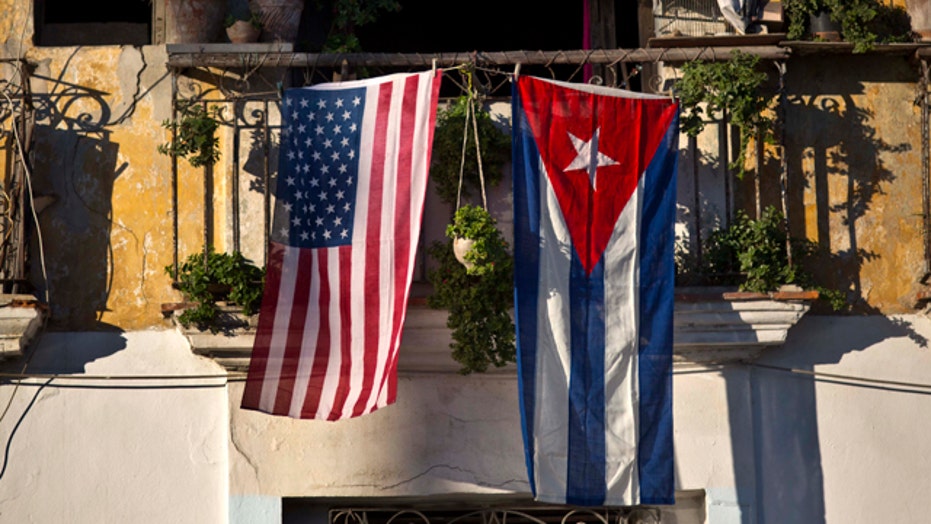 Mixed reaction to shift on Cuba

President Obama’s decision to open relations with Cuba was the right thing to do -- but not for the reasons he gave.  As usual, the president couldn’t resist the temptation rise above petty criticisms of his predecessors'  "failed policies" to justify his unilateral action. But he’s missing the point. It’s not about correcting past mistakes, it’s about avoiding future ones.

The United States cannot allow our adversaries to once again dominate Cuba. We keep hearing that Cuba is woefully stuck in the 1950s, and needs massive infusions of cash, investment and infrastructure to enter the modern world.

Whichever big power steps up first to offer that will become Cuba’s major sponsor for a generation, and it will confer on that sponsor certain rights and privileges.

Neither China nor Russia currently have a major military presence in North America. Cuba could give it to them.

We must take steps now to ensure that Cuba doesn’t become a Russian or Chinese pawn, and thus serve as a launch pad to threaten America’s security were they to establish a military presence.

The Chinese and Russians know this and have already made inroads. Putin visited Havana in May and signed a series of agreements to develop Cuba’s offshore oil deposits, build up their infrastructure and forgive their debt. Cuban president Raoul Castro visited Beijing two years ago, China’s president visited Havana last year.

China is now Cuba’s second largest trading partner.  The Chinese and Russians are not going to Cuba because it is a brilliant business opportunity -- they are going because the country needs massive foreign investment with little prospect for immediate return. They are going, at least in part, because they believe they can demand something in return.  Neither China nor Russia currently have a major military presence in North America. Cuba could give it to them.

America has been blissfully free of security threats on our borders. We have friendly neighbors to the North and South, and moats to our East and West. Unlike just about every other country in the world, we don’t have to devote major resources to defend our borders. That would all change if our far-away adversaries were to have a threatening military presence at our doorstep.

If China is the lead country to develop Cuba, it’s not a big leap to imagine Chinese submarines based on their coastline. If it’s Russia, we might see their nuclear bombers based 90 miles off Florida.  Think those are unlikely to happen?  Think again. The closest the U.S. came nuclear war was during the Cuban Missile Crisis in 1962 – over Russian attempts to put nuclear missiles in Cuba.

It would be foreign policy malpractice if we stood aside while our adversaries develop strong bilateral and economic -- and possibly military relations -- with one of our closest and most unfriendly neighbors.

Since the early days of our republic, we have stood firm that we will stop any attempt by foreign powers to establish a foothold in North America. Yet last year Secretary Kerry -- out of the blue -- declared we were reversing 200 years of American foreign policy, and that the Monroe Doctrine was dead. This gives a green light to Russia and China.

I understand why many Americans are against President Obama’s decision to open relations with Cuba.

It rewards the Castro brothers’ communist dictatorship, it doesn’t do anything to advance the rights or plights of the Cuban people, and it is another unilateral power grab by a president determined to expand his imperial presidency. But those issues will pale in comparison to a Chinese- or Russian-dominated Cuba within shouting range of our shores.

Whichever major power helps Cuba enter the modern world will have enormous power there for a generation. That major power needs to be us.