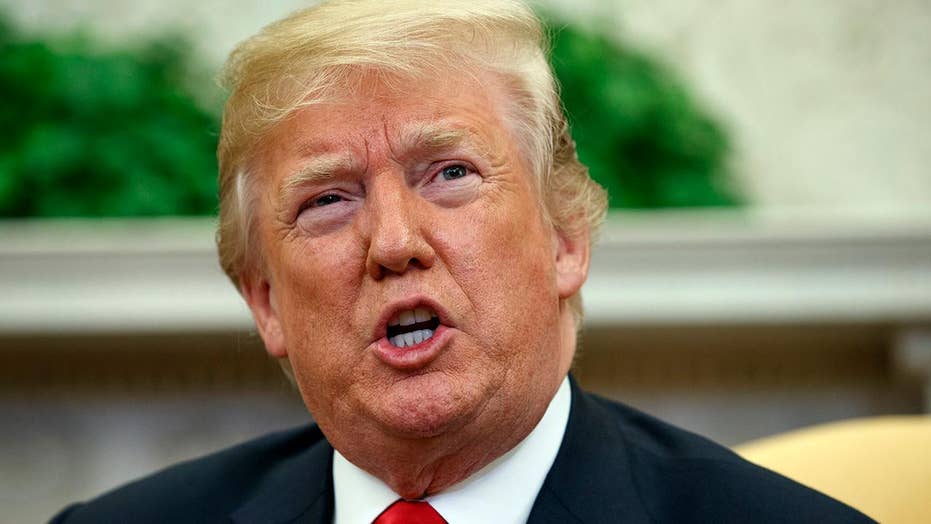 President Trump appears optimistic about progress with North Korea as reports of a memo written by Andrew McCabe add a new twist to the Russia investigation; John Roberts reports.

Talks continued Thursday between North Korean and U.S. officials to revive a summit between President Trump and dictator Kim Jong Un, as the president announced he would meet with a North Korean delegation Friday to receive a letter from Kim. Secretary of State Mike Pompeo said a summit is now “expected.”

One thing is clear: President’s Trump’s decision last week to cancel the summit, which had been scheduled for June 12 in Singapore, played a crucial role in getting the North to scramble and change its behavior to try to get the summit back on track for the original date or later.

The president’s decisive action calling off the summit was a skillful exercise in diplomacy. The cancellation showed the North that President Trump would not beg Kim – the leader of a small and impoverished communist state – to meet.

Kim appears to realize now that he is dealing with a different kind of opponent. President Trump wants North Korea denuclearized on American terms, verifiably and irreversibly. Whether this is possible remains to be seen, but the president knows how to play the diplomatic game.

The president’s decisive action calling off the summit was a skillful exercise in diplomacy. The cancellation showed the North that President Trump would not beg Kim – the leader of a small and impoverished communist state – to meet.

President Trump is projecting strength and because of that he’s giving the U.S., our allies, and indeed the whole world a real chance to stop North Korea from becoming a greater international nuclear threat.

It’s been apparent for some time that President Trump has two objectives. His ultimate goal is to remove North Korea’s nuclear threat. His interim goal is to force North Korea into negotiations over denuclearization.

To achieve the interim goal, President Trump substantially increased the downsides of Kim’s nuclear provocations – to both North Korea and its patron China. That was the point of the president’s “maximum pressure” policy against the North.

President Trump’s tough-talking personal exchanges with Kim before the summit was first announced showed that he is prepared to risk destabilizing the Korean Peninsula rather than cave in to whatever the North Koreans demand.

At the same time, the president toughened sanctions against North Korea, surged aircraft carriers to the Western Pacific, forged an even closer relationship with Japan, raised the visibility of military exercises with South Korea, and strengthened his personal interactions with South Korean President Moon Jae-in.

President Trump calculated that these moves would force China and the North Koreans away from a policy of provocation. For all Kim’s bluster, he doesn’t want conflict on the peninsula. Neither do the Chinese. Sanctions are a real threat to Kim’s regime, and a stronger American and allied presence in the region runs directly counter to the interests of both China and North Korea.

The world was shocked in March when Kim offered – and President Trump accepted – an invitation to meet to negotiate denuclearization of the Korean Peninsula. This showed that the maximum pressure policy was working.

Some experts wanted the president to refuse the invitation, conveyed by South Korea, to meet with Kim. But President Trump couldn’t do that – it would have embarrassed our South Korean ally. Besides, the president wanted the negotiations. So he accepted the invitation, while insisting that the talks would go nowhere unless the North Koreans agreed to denuclearization.

The first step in negotiation is always getting the other side to the table. But that’s hardly the end of the story, particularly when your opponent is practiced at taking advantage of his opposition. In this respect, it was certainly foreseeable that Kim would test President Trump’s mettle.

President Trump countered by holding out the prospect of easing economic sanctions, softening our military pressure, and saying he would protect the North Korean dictator from being ousted and assassinated. All of this was intended to signal good faith without making any real concessions.

Not surprisingly, as the date for the summit drew closer, the North quickly switched negotiating postures. North Korean officials snubbed a White House advance team in Singapore, labeled Vice President Mike Pence (notably, not President Trump) a “political dummy” and boasted of a “nuclear-to-nuclear showdown” between the two nations.

All these insults, boasts and threats by the North were a test. The North Koreans were gambling that President Trump had overinvested in the idea of negotiations and would do whatever needed to preserve the June 12 summit in Singapore.

Just as President Trump’s book “The Art of the Deal” says, the No. 1 rule of negotiation is that you have to be able to walk away from the table. If you can’t – if you show that you want an agreement more than the other side wants it – you’re doomed to a bad deal.

So last week, President Trump walked away. He cancelled the scheduled summit, turning the tables on the North Koreans and tested them to see how badly they wanted to get to the table.

President Trump was not the first president to walk away from a high-risk negotiation. President Reagan did it during negotiations on nuclear disarmament with the Soviet Union at the 1986 Reykjavik summit in Iceland, when the Soviets dug in their heels on the issue of missile defense.

It was a courageous move by President Reagan, who was more concerned with long-term results than immediate political benefits. The Soviets came back to the table and Reagan got what he wanted.

Conversely, when negotiating with Iran over its nuclear programs, the Obama administration was unwilling to walk away. It repeatedly set forth non-negotiable positions that it then proceeded to negotiate away. The result was a bad agreement.

President Trump had to drive home the message to the North Koreans that President Obama is not his role model. He had to make the point that under his leadership, the United States would not move from its most important demands. That clarity was necessary to set the right negotiating framework for the longer term.

While the political left was busy ridiculing President Trump’s decision to cancel the summit, North Korea immediately backtracked – like a bully who retreats when his target stands up to him.

Last Friday, Kim announced that he was still willing to meet with President Trump “at any time.” North Korean foreign ministry official Kim Kye Gwan expressed North Korea’s appreciation for President Trump “having made the bold decision, which any other U.S. presidents dared not, and made efforts for such a crucial event as the summit."

Later that day, South Korean President Moon had a surprise meeting with Kim Jong Un in the Demilitarized Zone dividing the two Koreas, and on Sunday officials from North Korea and the United States began meetings to discuss the summit.

This dance will continue. We can expect further attempts to get the United States to reduce its pressure without receiving any real concession in return. That strategy has worked for North Korea in the past. It’s not likely to work with the leader America now has in the Oval Office.

Former Senator Jim Talent served twelve years on the House and Senate Armed Services committees. He is a Visiting Senior Fellow with the American Enterprise Institute and was Director of AEI’s National Security 2020 Project. He writes and speaks extensively on the U.S - China relationship