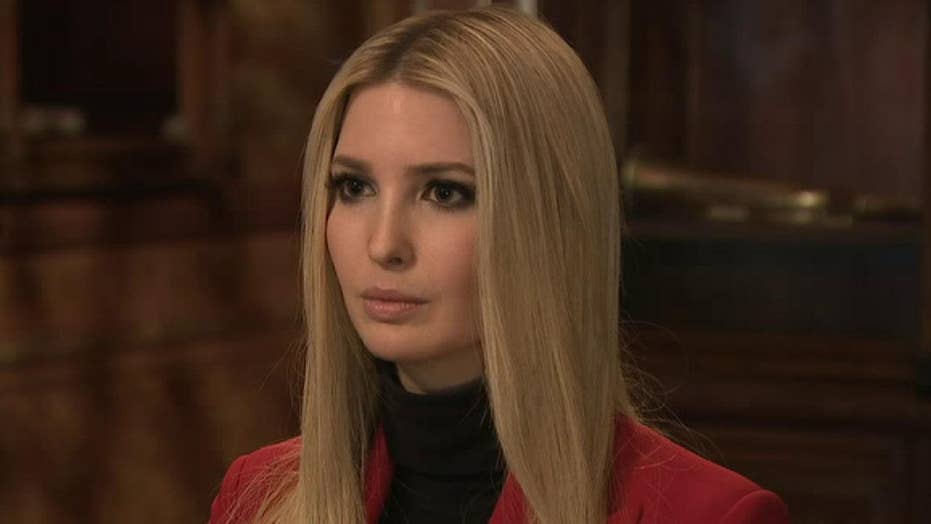 Ivanka Trump: Americans want to work for what they get

Ivanka Trump addresses Ocasio-Cortez' Green New Deal in an interview with Steve Hilton on 'The Next Revolution.'

Imagine this, Ivanka Trump had the gall to say in a recent interview with Fox News' Steve Hilton, that she doesn’t believe “most Americans, in their heart, want to be given something. People want to work for what they get.” Of course, the Twitter-verse lit up with derogatory comments following this Fox News interview, attacking Ivanka for saying such a thing.  After all, she has committed the left’s cardinal sin: She was born into great wealth and -- worse yet -- it doesn’t embarrass her.

In reality, what Ivanka said was something a person born into wealth is well positioned to understand: In life, people get far more from what they accomplish than they do from what they are given.  That’s often a difficult lesson for those lucky enough to be born into a life of affluence with no real need to accomplish anything.  But, no matter your level of economic comfort, working for what you get is how you develop personal traits such as dignity and self-confidence, both of which Ms. Trump has in abundance.

After an abbreviated version of the interview surfaced, Ivanka clarified her position stating that she supports “a minimum wage” but does not “believe in a minimum guarantee for people ‘unwilling to work’ which was the question asked of me.” Like Ivanka, I support a minimum income (I use “income” so as not to confuse this issue with the $15 minimum wage debate), but in the form of what is called the earned income tax credit (EITC), a program that supplements incomes of the working poor through the tax code. Eligible EITC recipients receive government assistance to supplement their wages. As their income from work rises, their government assistance declines until it is no longer necessary.

ANDY PUZDER: SOCIALISM VS. CAPITALISM – I WANT MY GRANDCHILDREN TO KNOW THIS STORY COULD ONLY HAPPEN HERE

No one (and certainly not Ivanka) is arguing that we should ignore those who are in economic distress. But Ivanka understands something her critics don’t; people need both to be and to feel useful, to contribute to the world around them and to know their contribution has actual worth.

There is a value in addition to money in having an employer who hires you because she needs you and who increases your compensation because you earned it. That is far different from the experience in countries where the government guarantees your income regardless of your performance – or whether you work at all.  The former creates confidence and motivates you to further success.  The later can mire you in self-doubt and dependence.

I can still recall when the franchise owner of the Baskin-Robbins where I worked for minimum wage as a teen called me into her office, gave me a 10 cent an hour raise (to $1.10), handed me a key, and told me I was now the Assistant Manager.  It was perhaps the proudest day of my career.  I opened up the place the following day. I’ll bet we had the cleanest Baskin-Robbins in America that morning.  I felt the kind of pride and self-confidence that can keep a person working (or in school), striving for success and off the streets.

Would I have felt as proud or as self-confident if I had that job because the government compelled my employer to hire me, or if I knew I would keep it regardless of how well I performed, much less if I had just been given the money I earned? For those who have perhaps never shared the experience, the answer is - unequivocally - No!

There was a time -- perhaps in a different America -- when comments such as Ivanka’s weren’t considered offensive. Rather, they were considered obvious.  We should never ignore the needs of those living in poverty. I hope that, as a nation, we never will. But it is also a mistake to ignore the reality that most Americans want to earn their success.

For the most part, as Ivanka noted, we remain a nation of achievers who “want to work for what they get.”  Under President Trump’s capitalist free market economic policies, with less government, lower taxes and reduced regulation, we are once again driving the world’s greatest economic engine, producing abundant good quality jobs and increasing wages at the fastest pace in a decade.

That’s a good thing, not just because more Americans have more money, but because more Americans have a job, earned success and the dignity and self-respect that come with them.  Work is a good thing, not a bad thing.  Ivanka was right to say what she said; her critics ought to step back and reflect on what their attitude, if it prevailed, would really mean for our people.